Six volumes of a Sanskrit-English lexicon has taken 55 years. The scholars plod along, dodging the funders' axe. 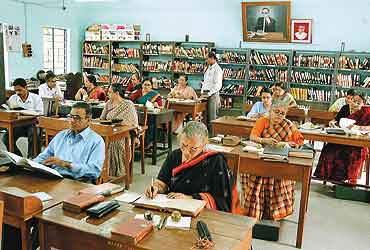 outlookindia.com
-0001-11-30T00:00:00+0553
Words usually tell stories. But words, in this case, have become the story. A very, very long story. Here's the plot: Pune's Deccan College, a 182-year-old archaeology and linguistics research institute, began work on a Sanskrit-to-English dictionary in 1948. Fifty-five years and six volumes later, the translation of words beginning with the first of Sanskrit's 45 letters isn't complete!

There are many twists and turns in this tale, delaying its denouement. For one, the objective of the project. According to A.M. Ghatge, the dictionary's first general editor, each translated expression is to have "all relevant information about Sanskrit words, such as their earliest occurrences, the entire range of their meanings—both common and technical—their provenance at different times and in different branches of learning, their status (as current or obsolete), their derivation and etymology, and the changes in their meanings in their historical development and mutual relations." That is, static one-item word-meanings are anathema in this gigantic lexical undertaking.

So, naturally then, the plot can only thicken, as have the volumes. And in the offing now is a definitive pack of wordbooks gleaned from the entire literary and religious corpus of the primeval Indian language, long since discarded from vernacular use. Which is why over 30 scholars had been beavering away for the first 25 years to unearth meanings and their contexts from 1,473 texts representing Sanskrit literature spanning 8,000 years (6000 BC-1800 AD) and 64 branches of learning. By 1975, the haul had been catalogued in over nine million hand-written reference slips, neatly filed in metal drawers stacked in a scriptorium.

The background to the project could well be one of its characters, adding to the saga's sorry state. Paucity is painted all over the college's staid interiors. A consequence of the economic adventurism of successive Maharashtra governments that have rendered state-funded education dull and anaemic. Quixotic recruitment protocols, subverted by reservation policies and red tape, have spawned gaping staff vacancies—the illustrious college library comprising nearly two lakh volumes has only 14 people manning it. Gen X appears to be cold-shouldering academic projects that don't help rake in lucre. Impassioned foreigners swarming the institute fail to evoke the natives.

Meet the scant force of scholars plugging away at the project, and untold tales of scholastic triumphs topple over. They've diligently pursued goals amidst lengthy power cuts, broken furniture and massive non-recognition. Promotions have eluded even the veterans for years. State funding for the project has shrunk. Political pressure to "speed up" things has mounted, even as the team size has thinned from 35 two decades ago to 18 presently. This includes the two new faces the team welcomed recently after over a decade. The first five computers have only surfaced now. Yet, the project has footslogged pauselessly, courtesy the likes of 70-year-old Sanskrit expert and project advisor D.B. Polkam, who, well past his superannuation, still unfailingly commutes the length of Pune to contribute to the dictionary.

Because deferments, or doubts about making sense of a language dead for most, don't deter men like him. Nor do the puns, equivoques, metaphors, mutant meanings and allegorical drifts, which, at times, mandate as much as a fortnight to prepare a word for dictionary entry.

This is how it works. Dr Vinayaka Bhatta, the project coordinator, who also carries out the duties of a general editor, allots a word to one of the six three-member teams. They establish the grammatical standing of the word, then rummage Sanskrit commentaries and English dictionaries, or if those are a no-go, ruminate on the context of the word's occurrence to decipher its meaning.Once the grammatical ramifications have been fleshed out, the team records the exact occurrence of the word and further annotates it with the exact mode of reference. Crimps are then straightened out through brainstorming. "No dictionary provides the meaning, the context, as well as the usage of a word," says Bhatta. "These words hail from multifarious, esoteric disciplines. Access to experts from those disciplines could help the project."

Of the proposed 20,000 pages, around 3,368, forming six volumes, each comprising 3 fascicules (parts), have thus far been edited and printed. Most projections have failed to keep pace with the ever-evolving ambit of the project. "When I joined the project 25 years ago, I had no idea about its vastness," says Bhatta.

This, while scholars the world over continue to marvel at the rigour and reach of Sanskrit, which has preserved the roots and forms of the hypothesised parent language and offers a crucial insight into the history and relation of a swathe of Indo-European languages. Even as these scholars mine the language for values of promise to the modern world, a country like Thailand is using it to coin newer technical terms. Nothing bears out Sanskrit's reputation as the world's most scientific language as well as grammarian Panini's codification of its intricacies as quasi-mathematical rules, much like those governing modern generative grammar. But does that hasten or hinder the project? "Both," says Bhatta. "Neither can one provide false etymology, nor can one avoid it."

Yet, driving home the arcane import of the language isn't easy. "No society can develop unless it values its heritage," maintains Prof K. Paddayya, director of the project. "As one of the four most ancient regions of the world, we can't lose sight of our moorings, not chauvinistically, but because some profound concepts are enshrined in our heritage, which still guide our minds and set us apart from the rest of the world." Says Bhatta, "That more Indians are speaking English does not mean Sanskrit's importance has diminished. Two languages can coexist."

Boehtling-and-Roth's seminal seven-volume Sanskrit-Woerterbuch (1852-75), or the dictionaries drawn up by the British Orientalist Monier Williams and Pune's very own Vaman Apte may well be the team's secondary sources, but its intent is on transcending their scope, no matter what it takes. And, like ancient scholars resorting to Sanskrit for a pan-Indian reach, this team is assaying English equivalents to reach larger audiences.

Despite the HRD ministry's Rashtriya Sanskrit Samsthan funding some project positions, the team doesn't have a general editor or an assistant editor. So the state governor's exhortation to "bring out all the volumes of the book within the next five years" is amusing for many.

Paddayya believes that setting deadlines is critical. "We should target one volume a year. However, notwithstanding all the pressure, the team cannot sacrifice quality." Only an increase in the team size will enable completion of 500 pages annually.

The need to scan and digitise the senescent slips and other source material is pressing. The Centre for Development of Advanced Computing has asked for a whopping Rs 4.5 crore for the job. "The state government will never be able to afford such costs," says Paddayya.

"Several high HRD ministry functionaries have promised to look into our woes," he reveals, "Strangely, governments have developed an indifference towards higher education. They must have a special attitude towards a specialised institution like ours."

But to the farsighted, there's an end in sight. Tentative estimates peg the completion date for the monumental project a good 50 years or so from now!