As a record of the torment of our recent history, both anthologies are valuable, though uneven, testimonies. 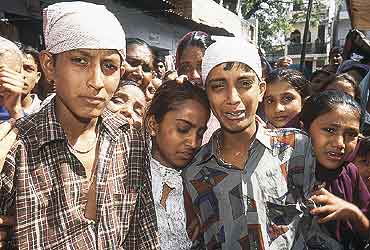 Lest We Forget & Harvest Of Hate—Gujarat Under Siege
By Edited By Amrita Kumar By Prashun Bhaumik By Swami Agnivesh By Valson Thampu
Rupa Pages: 154; Rs 195 & Pages: 140; Rs 150
The writing of contemporary history is a perilous enterprise at the best of times. It is even more deeply fraught with danger when the subject is a colossal human tragedy still unfolding, its wounds unhealed, untreated. Yet barely four months after the horrific killings in a rail compartment in Godhra and the subsequent carnage that shamed Gujarat and the nation, there are already two significant volumes attempting to make some sense of a defining and defiling moment in our collective history.

The strength of some of the essays in Lest We Forget is in the recreation of the horror. Possibly the most haunting is Priyanka Kakodkar's record of the testimonies of the child survivors. Anjolie Ela Menon draws a vivid, compassionate picture of the nightmarish conditions in relief camps. As in the blistering heat women tell stories of brutality and weep silently, "despair is the flavour of the morning, it wafts across the compound imperceptibly". Barkha Dutt gut-wrenchingly describes what her camera would never share, "the body of a woman, mouth agape, legs wrenched open, her head thrown back...one arm still flailing in the air, probably her last attempt to fight the man or men who had raped her, before killing her".

But the anthology is most memorable for the anger and anguish of personal responses to the catastrophe. The most compelling is Siddharth Varadarajan's iconic tribute to Geetaben, gang-raped and killed while enabling her Muslim friend to flee his killers. He salutes her: "For even in death with your helpless, innocent body bloodied and your clothes ripped apart, you showed more courage, humanity and dignity and more fidelity to the Hindu religion than Prime Minister Atal Behari Vajpayee has done in the past month". Saeed Naqvi movingly describes his shame by the "questioning, pitying gaze" of people he once confronted with his pride in being an Indian Muslim, protected by the resilience of Indian secularism.

It is this personal anguish and loss that is the recurring motif in the monograph by Swami Agnivesh and Valson Thampu. They mourn the "wails of widows and the shrieks of burning children, which mock the music of our national anthem". They describe the "columns of smoke from fires of hate" as crowds "operated more like demolition-cum-extermination squads than hysterical mobs on frenzied individuals". They plead for the restoration of the authentic spiritual core of religion, for compassion, righteousness and rational enquiry.

However both books fail to make a cogent, consistent and incisive analysis. It is remarkable that most social scientists in Gujarat over the past decade failed to record or predict the enormous polarisation which is today so evident, nor recognise the socio-political process by which this was achieved. Neither volume enables us to fathom what led to so bitter and uncompromising a social divide, nor why such a large number of Dalits and tribals participated, nor indeed the active plunder and abetment to violence by middle-class urban residents. Many questions remain unanswered, such as what transforms ordinary people into savage mobs, why institutions both of the state and civil society collapse with such abject terminal complicity, what inspires legions of young men to seek anchor in ideologies of hatred?

As a record of the torment of our recent history, both anthologies are valuable, though uneven, testimonies. But for a deeper understanding of the paths that led us without forewarning to this violent blood-drenched crossroads in our collective history, the healing of time and the perspective of distance are essential.