The slogan has no scriptural sanction, but religious and secular connotations 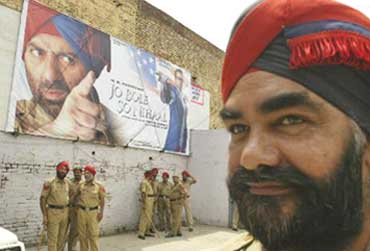 outlookindia.com
-0001-11-30T00:00:00+0553
The slogan Jo bole so nihal, Sat Sri Akal (Blessed is the one who says God is truth) has both secular and religious connotations. At the end of a religious congregation, one person says, Jo bole so nihal, and the congregation replies: Sat Sri Akal. But there is no scriptural sanction for this, it is part of the maryada, the tradition, born much after the gurus.

As for the secular aspect, it was the war cry of the Sikhs when they went out to war against the armies of the Mughals and the Pathans. The Hindu equivalent would be Har Har Mahadev, the Muslim equivalent Allah-o-Akbar. This was a war cry the Sikhs used especially when they went on the offensive, what they called Jaikara.

The slogan is also used in both political and religious meetings as a form of applause, a sort of "Well done!" And just how freely the words are used can be illustrated by the fact that Sikhs use it as a toast before they start drinking, just as Muslims start with a Bismillah.

While there has been an increasing growth of intolerance among the Sikhs, they still don't bother to understand the words of the gurus. "Ikna sudh, na budh, na akal sar, akhar ka bheo na lahant/Nanak se nar asal khar, jo bin gun garab karant (Neither thinking nor understanding, they read words without meaning. Nanak says they are real donkeys, those who without doing any good are proud)."

It's a shame that a community that was so self-confident and could laugh at itself has become so bigoted, especially with the growth of a Taliban element among them. I've been slapped with a warning by the SGPC: they don't like me making jokes about Sardarjis. They threatened action against me if I didn't stop. What can they do—summon me to the Akal Takht and make me polish the shoes of worshippers? I just went ahead, using their letter in the introduction to my latest joke book. As one Sikh historian put it: "Sikhan ki jaatpaat hai danga, danga unhone guru seon manga (The Sikhs' creed is trouble; that's the blessing they asked from the Gurus.)"