Summer’s upon us, and whether you’re sweating in Chennai or baking in Delhi, it’s time to make a few dietary changes your body will thank you for...

Fruit
Why: You get lots of fibre, antioxidants like Vitamin C and essential salts like potassium. Juice is great, but you’ll miss the fibre. Ditch: Pastries and heavy desserts

Cold Soups
Why: Tastes great, plus all the gains from fruits and fresh or lightly cooked vegetables. Ditch: Fried snacks.

Water
Why: Restores the physiological balance upset by hot weather; drink even when you’re not very thirsty. Ditch: Alcohol, caffeine 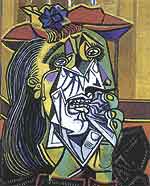 What: Famous painting from Picasso’s later, post-cubist period, modelled on his lover at the time, Dora Maar.

Big picture: Depicts suffering of the Spanish in their civil war. Micro view: Stunning representation of what happens to a woman’s face when she begins to cry. Compulsive lothario, Picasso had had plenty of experience...

So you thought you knew all about
K.L. Saigal 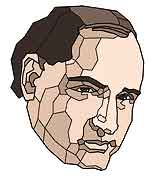 2005 is the birth centenary year of the man who defined singing, acting in his time. Spot the slip here.

B. Was a typewriter salesman before joining New Theatres where he worked with R.C. Boral, Pankaj Mullick.

E. His Devdas so impressed director P.C. Barua, he gave him the same role in Bengali.

Representation of reality; like, graphics in computer games can be a simulacra of reality. Also referred by philosophers (Jean Baudrillard, Gianni Vattimo) to explain why, say, malls with commercial images become architectural simulacra of market image more than just physical space.