Peace may prevail over its enemies finally, as Colombo opens up the country beyond Vavuniya and the Tigers find a stake in talks 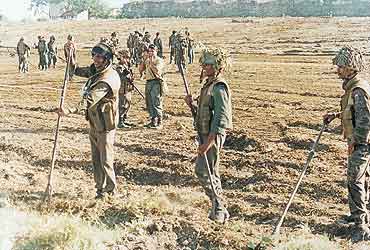 outlookindia.com
-0001-11-30T00:00:00+0553
When in 1997 the Sri Lankan army tried to open the main highway from the northern city of Vavuniya to the Jaffna peninsula, it only managed to embroil itself in the bloodiest military operations in the 20-year-old separatist war the Liberation Tigers of Tamil Eelam (ltte) have been waging. The Tamil rebels fought back ferociously, killing 1,300 soldiers before the army stopped operations 18 months later.

What the bloody fighting failed to achieve then is now being done without firing a single bullet. Both the army and the rebels are busy clearing land mines in the Vavuniya axis, which cuts across the ltte-held Wannia or the northern mainland, to enter the Jaffna peninsula. The entry point at Vavuniya, the northernmost mainland town under government control, opened this week, and within a month land mines will also be cleared from the Jaffna end of the highway, connecting the government-held peninsula to the mainland for the first time in a decade and allowing people and goods to move without hindrance.

It was amidst all this that I stepped into Vavuniya last week, to see a team of the International Committee of the Red Cross (icrc) supervising army engineers busy removing hundreds of anti-personnel mines ahead of its trenches. About 500 metres away the rebels were involved in a similar exercise. But soon the clearing operation hit a snag. The rebels demanded that they wanted to clear 60 metres further towards the army lines. The army refused.

The icrc officials were quick to step in. The army major responsible for clearing the mines contacted his superiors; they said the original agreement between the rebels and the army had to be adhered to. Just when the icrc officials were ready to throw up their hands in despair, the major received a radio message: allow the ltte to clear the disputed 60 m of no man's land. Both sides broke up for lunch; the major quipped, "Well, that was resolved pretty fast."

Free flow of goods and people to the rebel areas was a key ltte precondition for starting peace talks. This contentious issue had indeed scuttled earlier attempts at peace. Says P. Sampanthan, spokesperson for the Tamil National Alliance (tna) which has 16 seats in Parliament: "Tamil people have the right to expect all the facilities and freedom the people in the rest of the country do. Otherwise, the peace process becomes a meaningless exercise for them."

The next stages in the peace process too have been delineated. An MoU declaring a ceasefire between the two sides for a year is expected to be signed in the next fortnight. Then a team from Nordic countries would place observers on the ground to ensure the ceasefire holds. Further, Prime Minister Ranil Wickremesinghe is expected to lift or suspend the ban on the ltte after local government elections mid-March, paving the way for 'talks on talks'.

But Wickremesinghe is being cautious. Talking to Outlook, he said: "This cannot be an open-ended process nor is there a firm deadline. I think this process will take two to three years before we have a final deal." The peace process could still falter but there are many who think that the two sides are now displaying greater pragmatism. As Dr Paikiasothy Saravanamuttu, executive director of the Centre for Policy Alternatives, points out, "Both the government and the ltte want to get the war out of the way. Secondly, there is a third party facilitation this time round. Thirdly, there is the new international political climate since September 11. All in all, the scenario looks better."

The winds of change are already sweeping the island. At Piramanalakulam, a hamlet located 18 miles west of Vavuniya, people are already moving freely between the government-controlled areas and the rebel territory in the north.Last month the government lifted the ban on free flow of goods, other than military hardware, to rebel areas. "The crossing point was open only for two days a week before. Now it is open five days a week. Checking is minimal. Ten times the number of people and goods are moving in and out now," says Ponnaiah Manikawasagam, a Vavuniya-based journalist.

There's optimism in the air. A.J. Cruez is a deputy director of education in the rebel area of Wanni. He had come down to Vavuniya on his way to meet his family in another town. Cruez is hopeful of a breakthrough: "People are optimistic that this time peace will come. The hardship in the rebel-held areas has eased considerably. Prices have come down ever since the supplies began to come in freely."

So far so good, but opposition from hardline Sinhala groups and the People's Alliance (PA) of President Chandrika Kumaratunga is expected to mount in the coming months. The PA has expressed its support to the peace process, but there are many who feel the uneasy co-habitation between Kumaratunga and Wickremesinghe will be short-lived. Says Lasantha Wickremetunga, editor of the Sunday Leader newspaper: "President Kumaratunga can dissolve Parliament anytime after the first year and she is very likely to do so. It would have made political sense for the prime minister to move against Kumaratunga soon after the general elections in December. But I think the prime minister wants the peace process firmly in place before he does that."

The government, however, is banking on the pro-peace sentiments of a population tired of two decades of violence. Argues Wickremesinghe: "There are groups both in the south and in the north that oppose this process. But I think a vast majority wants peace. If that support can be harnessed properly, we can overcome the opposition."

For the rebels to give up on their dream of a separate state won't be easy. At least 20,000 of their comrades have been killed and thousands wounded. But with the war reaching a stalemate and the ltte already banned in India, the US, UK, Australia and Canada, the rebel leaders know their terror tactics post-September 11 can only enable Colombo to muster international support against them. In other words, the ltte now has a stake in peace.

So, what can the ltte hope for? Says the tna's Sampanthan: "It has to be some sort of shared sovereignty.... For the prime minister, devolution of power is not a problem." True indeed if we are to believe what Wickremesinghe told Outlook: "Everything is on the table other than the territorial integrity of the nation." If that can't usher in peace, nothing would.