Brands empower us to choose, be it products or politicians. And to kill the unfit. 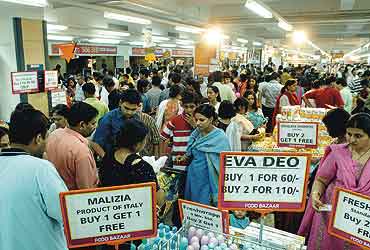 outlookindia.com
-0001-11-30T00:00:00+0553
From the roof of the apartment building I stay in, in the Delhi suburb of Gurgaon, you can see the mall lights glittering. Massive brand logos shimmer in neon; giant screens hung outside the malls spew music videos and commercials at the gathered throngs; and the sound of horns being blared by frustrated drivers caught in traffic snarls in front of the plazas waft through the still night air for miles. If you turn your back on the malls, across the barren field behind the building, next to the Delhi-Jaipur highway rises a striking behemoth of a building, the world's largest single-site call center, owned by Convergys.

In Calcutta, even on weeknights, the restaurants in the five-stars are choc-a-bloc. And the number of restaurants all over the city must have quadrupled in the last four years. What you see outside discotheque Tantra any midnight isn't very different from what you would see in Times Square. And this in a city over which a smog of gloom appeared to have been getting thicker by the decade ever since the mid-1960s. It's almost like at the turn of the millennium, Calcuttans just decided to bootstrap themselves into a state of consumerist bliss.

Everyone's willing to pay in today's India, and for everything. For beauty, for love, for unscrambling one's mind, for a life that would seem less ordinary. Everyone's also willing to reject. All around us, stores and eateries shut shop with alarming regularity and are replaced by other stores and eateries even before the ink on the "To Let" sign has dried. Slates are wiped clean and the new scribbles appear magically. There's always someone to take another shot at wooing some wallets, and some wallets are always ready to try out the offer and pass swift verdict and move on. In the high-speed drive down the highway to happiness, there's no time to look at the rearview mirror.

Which has shrunk faster in these ten years: attention spans or memories? I can't remember.

We know all the reasons for rising consumerism. Globalisation, Americanisation, rising aspirations, the growth of a new middle class free of their parents' guilt about not saving enough, urban fatigue finding solace in the joys of possession, the traditional joint family support system being replaced by the comfort of being part of a mall mob, self-esteem getting linked to what you can flaunt, constant bombardment through the media of the message that lifestyle can be quite an acceptable surrogate for life. Those are supposed to be the causes, and they are now cliches. What is more intriguing are the effects. For the effects are hardly confined to products, markets and wallets. 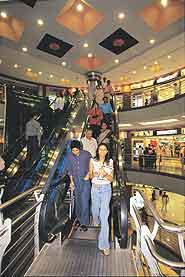 At the heart of consumerism resides the concept of choice. When there wasn't a choice, you paid for a Bajaj scooter and waited for years to get delivery. Today there are dozens of two-wheeler models to choose from, and each one of them is promising at least one seemingly perfectly valid reason why it should be bought. Even when the consumer has decided on the price band within which he is going to shop, there are myriad choices he has to make before he can finally ride home on his new wheels. And once he learns he can and must choose, once he knows choice, he carries that power within himself, consciously, in every role that he has in life.

Across the world, whenever a dictator has opened up their nation's markets to a deluge of brands, he has rung his own death knell. Brands mean choice, and citizens cotton on pretty damn quickly that if I have the power to choose between stuff stored on shop shelves, I should have the power to choose in other areas too, including who rules me. To choose from between six brands, you need to ask questions and answer them yourself, or demand the answer from the merchant. In its most fundamental form, choice is the right to demand answers. So the mental leap from democracy on the shelves and democracy in the streets is a short and inevitable one.

The next decade could be the most interesting ever for watchers of Chinese society.

But in India, we have always had democracy. So choice has manifested itself in deeper ways, making our polity much more uncertain, but arguably richer. Between 1950 and 1990, 41 years, India had 11 governments. Since 1991, 15 years, when the economic reforms began, we have had six. In a span of 34 years, between 1950 and 1983, we had eight governments. In the 22 years beginning 1984, when Rajiv Gandhi first opened up India's doors to multinational corporations, we have had nine.

Of course, this is oversimplification, as almost any statement trying to explain India cannot avoid being. There have been Mandals and riots and wars and assassinations and unlikely coalitions in these years, but hear me out. The deep rich-poor divide still rules our nation, hale and hearty, but the way it plays out today may be significantly different from how the script read in say the 1950s and 1960s. When the poor knew that they were poor, but did not know how the rich lived.

Today, they know. Something very profound changed in our society when the colour television replaced the refrigerator as the first consumer durable a family buys. Entertainment scored over hygiene and convenience. And vast masses instantly became privy to lifestyles that are pure fantasy for anyone outside maybe a charmed 0.3 per cent of the country. Not everyone who goes to a mall in Gurgaon comes out with a laden shopping bag. Those who spend are outnumbered by those who merely window-shop and aspire. And most of them will never manage to earn enough to own the baubles they covet and watch the more fortunate buy.

Aspiration is as old as the first sapient primate who decided he wanted to swing in other ways than from trees. And the gap between aspiration and reality was invented a moment after the first realisation. Garibs knew better than anyone else what Garibi Hatao meant. But today, that gap between what you desire and what you have has expanded to a wide chasm, and growing fast. And it is almost impossible for any government to fill that gorge in five years, to any extent that is acceptable to very large numbers of Indian citizenry. You can build the world's fanciest highways and froth at the mouth about the coming multiplier effects, but who has the patience to wait for the multiples to reach in their own sweet time? Consumerism is as much about shrugging rejection as it is about choice. It is also about instant home delivery.

And those who have benefited most from the reforms have booked their profits and used their gains to cut themselves free from public services. There is no public transport system worth its name in New Gurgaon. Security is provided by the private sector. As is much of the electricity. Water harvesting is done on a war footing to reduce dependence on government water. It is possible that there are more phone lines supplied by the private sector than by the public. And in the last Haryana assembly elections, a polling booth here had the lowest voter turnout among all the constituencies. 12.67 per cent.

While the haves have chosen to opt out, the have-nots now know exactly how much they don't have. This is not a good time to be a politician in India. And that's the best thing that the economic reforms have wrought. May there be more brands on our shop shelves.