A subtle rattle of sabres at China, Russia will be the background music for all the BRICS deal-making 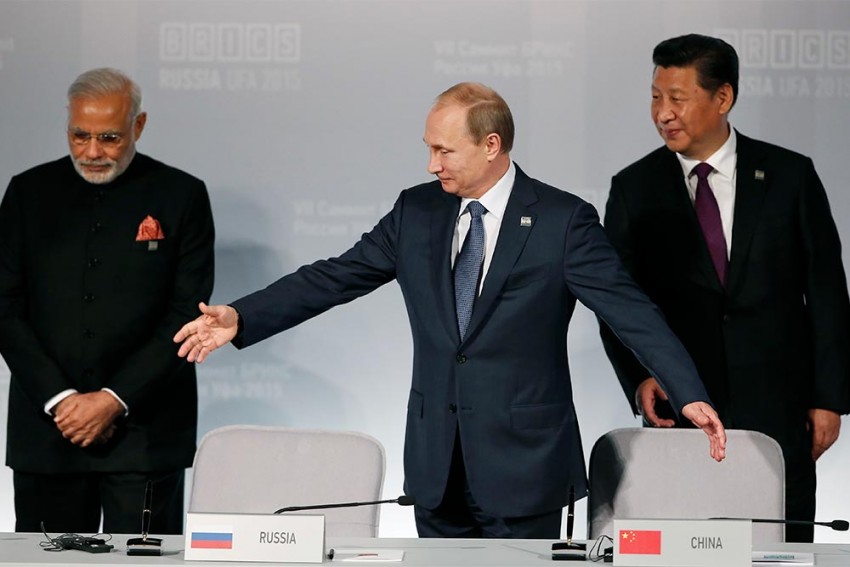 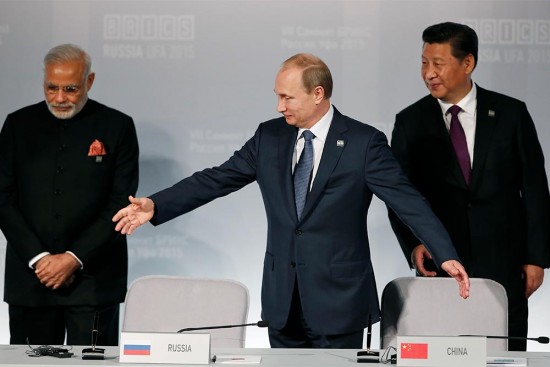 Days before he plays host to one of India’s biggest internatio­nal events—the BRICS summit, plus the BIMSTEC outreach in Goa—Prime Minister Narendra Modi is faced with a tricky diplomatic challenge involving China. On the one hand, he needs to register India’s resentment over cosy Sino-Pak ties. On the other, he wants to reassure the Chinese leadership that India is still willing to work together with Beijing for their mutual benefit and in restructuring the world to emb­olden emerging economies.

Heads of government from the five-member BRICS countries and senior leaders of the BIMSTEC, a grouping of seven reg­ional neighbours of South and Southeast Asia, will converge on Goa on October 15-16 to negotiate multiple bilateral currents in a multilateral space. The key event will be a meeting between prime minister Modi and Chinese President Xi Jinping on the sidelines.

“This is not a summit meeting between the two leaders where all issues are discussed. But some issues of interest and the general direction of the bilateral relations are definitely going to be part of the talks,” says a senior South Block official.

A social media campaign has been gaining ground in India in recent days to boycott Chinese goods. The resentment about cheap China-made goods flooding Indian markets, ruthlessly pushing out small Ind­ian manufacturers, has been simmering for long, but it has started gaining traction after China’s recent decision to put on technical hold a proposed UN ban on the chief of Pakistan-based terror outfit Jaish-e-Mohammed, Masood Azhar, for a second time. The heightened nationalist fervour after the ‘surgical strike’ inside Pakistan has only strengthened the campaign.

“Barring fresh air, perhaps, we have started importing just about everything from China,” says N. Ravi, former Secretary (East) in the MEA. Ravi says the boycott call has surfaced following reports on how Pakistan continues to get China’s support despite carrying out cross-border terrorism against India. “The government can take advantage of the prevailing sentiment and create space for PM Modi’s ‘Make in India’ initiative,” adds Ravi.

There is perceptible change in the mood in the government as well as among the public when compared to 2012, when the last BRICS summit was held in New Delhi. Then, the Manmohan Singh government, facing a series of corruption scams, was literally under siege from a massive protest rally launched by Anna Hazare and his supporters that clogged much of Delhi’s arterial roads.

The Centre hasn’t tried to curb the ‘boycott Chinese goods’ campaign, indicating its concerns about Beijing’s cosy relations with Pakistan.

Four years later, with India again at the BRICS chair, PM Modi has been basking in the glory of a strong nationalist mood for being able to “teach Pak­istan a lesson” by targeting terrorists inside its territory. The upbeat mood will definitely reflect in Modi’s speech when he addresses the summit and it will colour his interactions with BRICS leaders and BIMSTEC members.

Through its ambassador in Moscow, Pankaj Saran, India has conveyed to Russia its displeasure about the former’s joint military exercises with Pakistan at a time when India is trying to isolate it as the state sponsor of terrorism in the region. A summit between Modi and Russian President Vladimir Putin is also due in Goa. The Russo-Pak engagement may come up, but since Moscow has subsequently shown its support for the ‘surgical strikes’, the two leaders are likely to highlight the strong India-Russia relations and their future cooperation.

A summit with Brazil and a meeting on the sidelines with South Africa are also due. But it is the Modi-Xi meeting that will generate much more interest than most of his other engagements.

Bilateral ties with China, the world’s second largest economy, are vital for India, but also pose one of its key foreign policy challenges. The fact that the Modi government had not tried to curb the “boycott Chinese goods” campaign indicates that it wants Beijing to realise that the full potential of Sino-Indian relations will be difficult to achieve so long as China condones Pakistan’s ‘soft line’ on terrorists operating from its soil against New Delhi.

But Modi is also mindful of the role China can play in India’s economic growth—a key plank for him to win imp­ending assembly elections and his own re-election in 2019. Moreover, a greater say in decision-making at key international financial institutions like the IMF and the World Bank is also in India’s int­erest as much it is in China’s.

A strong statement on the need to fight global terrorism is likely to come out of the Goa meet. Leaders of BRICS countries—that is, Brazil, Russia India, China and South Africa—will be joined in their call to meet the challenge posed by terror outfits across the world by Bangladesh, Bhutan, Nepal, Sri Lanka, Myanmar and Thailand. Though Afghanistan and Maldives are not members of the BIMSTEC, they have been invited to attend the outreach programme as observers.

The fact that the only notable absentee at this high-profile meet is Pakistan is a clear message on how India and others in the region see it as a problem for their cooperation and economic growth. 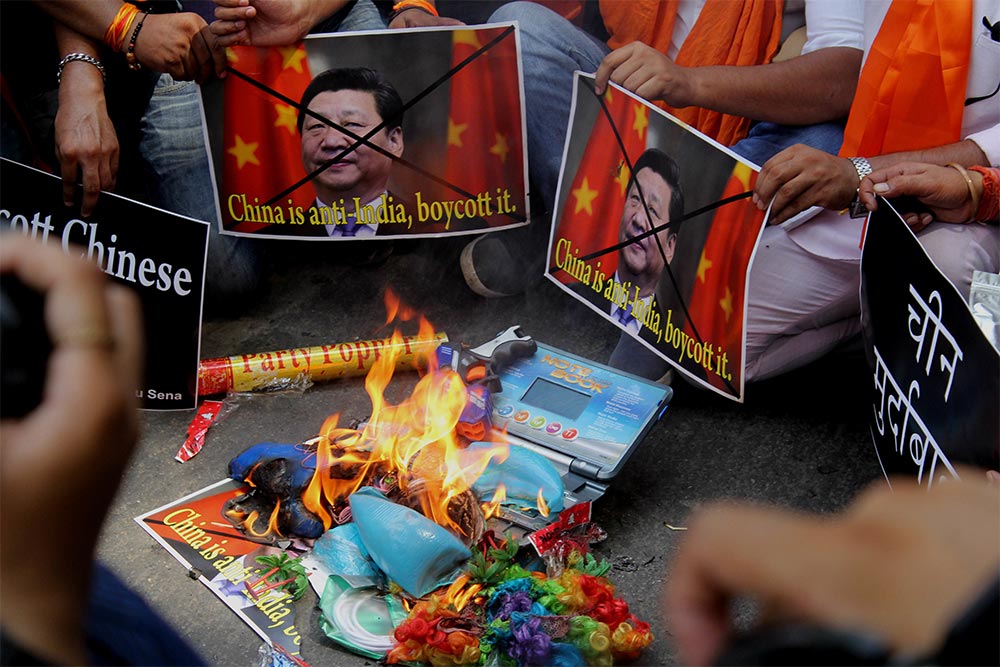 In addition to highlighting the scourge of terrorism, the BRICS focus will be on how this grouping of the emerging economies can claim a leadership role in the global economy. While ‘Building responsive, inclusive and collective solutions’ is the theme of the summit, special emphasis will be on enhancing closer cooperation and intra-­BRICS trade and investment. Ind­ian officials say that another objective will be to ensure that BRICS nations work clos­ely to find solutions to issues confronting their respective economies.

As an indication of the growing clout of the emerging economies, India has proposed the setting up of a BRICS credit rating age­ncy that can end the domination of the West, as the existing agencies like Standard & Poor’s and Moody Investor Services are all based and controlled by the developed economies. It’s a significant proposal. A credit agency set up in the dev­eloping world will be used mainly for emerging economies and will reduce the dependence on western agencies that arb­itrarily downgrade ratings of developing economies, resulting in rise in the cost of their borrowings. A BRICS rating agency can bring a different focus to the evaluation of economies in the developing world.

Along with these will be an attempt to increase greater cooperation among BRICS members in the services and goods trade by removing non-tariff barriers and enhancing closer and regular interactions amongst private sectors in the BRICS nations.

With the BIMSTEC countries, Modi will engage in areas that can lead to a faster economic integration among its members. The fact that regional cooperation and int­egration cannot go hand in hand with terrorism will, of course, be stressed during all discussions at the meeting.

Neither the BRICS summit nor the BIMSTEC outreach may have been pla­nned keeping in mind Pakistan’s growing regional and international isolation. But while presenting India as a responsible and capable country to meet the vari­ety of economic challenges facing a globe still convalescing from the slowdown, PM Modi is unlikely to miss this grand opportunity to reiterate his strong message against terrorists and their sponsors.