Dehli, That Town Which Was

Audacious in scale, the panorama made by Mazhar Ali Khan in 1846 gives a 360-degree perspective of the Red Fort and Shahjahanabad 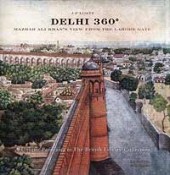 Shahjahan decided to move his capital from Agra to Delhi in 1638. A decade later, he made a triumphant processional entry through the Lahori Gate to his dream abode. The city it now overlooks—call it Shahjahanabad—took another ten years to fully come up.

The envy of the world when Shahjahan was ensconced at the Qila-i-Mualla, Shahjahanabad saw a precipitous decline within a period of 200 years. In 1857, the last of the Mughals, Bahadur Shah Zafar, was exiled to Rangoon and the Red Fort became a magazine and a garrison for British troops. Exquisite marble pavilions were pulled down to create barracks. Entire parts of the city were demolished and the city changed beyond recognition.

Mazhar Ali Khan, one of the great painters of the period between 1803 and 1857, when the British took charge of the city and the Mughal king was reduced to being a pensioner, was commissioned by the British Resident, Thomas Metcalfe, to do a series of paintings on different buildings and monuments of the city. This was a period when British rulers still had a certain respect and curiosity for native culture and commissioned artists like Mazhar Ali to record for their own memory and for people ‘back home’ the architectural marvels of the city.

For the sheer audacity of scale, the Panorama of Delhi made by Mazhar in 1846 is undoubtedly the most ambitious and significant work of this oeuvre. Almost five metres long, it provides a 360 degrees detailed perspective of the Red Fort and of Shahjahanabad, with annotated details of almost all the significant monuments and buildings in vision. It provides an accurate historical record of what old Delhi was like before the savage destruction of 1857. There is nothing close to this work, since the first photographic panorama was taken by Felice Beato only in 1858, after the mutilation.

J.P. Losty, formerly the curator-in-charge of the extensive India visual collection in the British Library in London, is eminently qualified to put this book together. Ritesh Nanda, the highly talented conservationist of the Aga Khan Trust for Culture, has added very valuable comments on each section of the Panorama and Pramod Kapoor, the publisher of Roli Books, who has conceptualised the book, has packaged it extravagantly, as is his style. As bonus, the buyer gets a beautiful reproduction of the Panorama—all five metres of it.

When another set of rulers, the British, decided to make Delhi the capital in 1911, they built New Delhi, discarding the old city. Like some ageing courtesan, Shahjahanabad gradually became a crumbling and chaotic relic of the past, while New Delhi got—and continues to get—all the attention of a new bride. Interestingly, when New Delhi was being planned, there was a proposal to organically link the old and new cities, so that they could both be part of one urban organism, but this was rejected. Now, through this book, readers can get a 360 degrees trip to the past, and actually see what once was, and how much of it has been either destroyed or allowed to fade away. This book is a collector’s piece for history buffs and Delhi lovers.