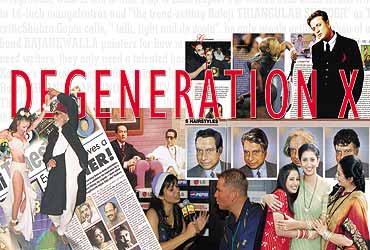 Have you checked out the Buzz of late? One Big Buzz that you couldn't have missed involved President A.P.J. Abdul Kalam's hair. Newspapers splashed pictures of his silver curls licking his collar; publications, including Outlook, suggested suitable computer-generated hairstyles on their pages, TV anchors discussed the Kalam Cut ad nauseam (one channel even ran an opinion poll about it). But when the President spoke about judicial activism and racial intolerance in Bhopal recently, hardly any paper reported his speech on the front page. Clearly, the President's views on the brotherhood of man matter much less to the media than his hairstyle. And that's what you call dumbing down—where noise blocks out the news.

Here are some real and hard-to-swallow facts:

Not dumb enough? Then, chew on this:

Gobsmacked? India's Dumbing Down, no doubt about it. As our media turns news, politics, sports and arts into entertainment and dubious celebs-turned-authorities hold forth on everything under the sun, no-brow rules. The dividing line between high-brow and kitsch is blurring: painters rub shoulders with models, Amartya Sen is interviewed in pulp city supplements, "serious" filmmakers make sad attempts at commercial cinema. Five minutes of fame is all everyone seems to be aspiring for.

The Times of India (TOI), which still remains for many a fine newspaper, recently ran a front-page story on the launch of the Viva variant of the Hyundai Accent. Why did this car launch make it to the front page in a country where new car models are launched frequently? To be fair, when scores of readers wrote letters of complaint, the paper apologised. On yet another day, on the front page again, was "Lovesick pilot flies into trouble". Perfect for Gen X, who'll lap up a Tom Cruise-like iaf pilot who flies a service helicopter to Jaisalmer 80 km from the Indo-Pak border to drop off a gift for his sweetheart. The only issue really was gross indiscipline but then Archies doesn't sell cards in a category called "Have a Nice Court Martial", does it?

Not that we're singling out the TOI. Even Outlook has celebrated Serena William's rump, Padma Lakshmi's cleavage and more. Almost every newspaper has plunged into the war of colour supplements. In a Hindustan Times (HT) story, "Who will dare to bare at lifw (Lakme India Fashion Week)?", the reporter writes: "Last year, Jesse Randhawa walked out in a nipple-revealing top which Randhawa says slipped, but what a slip—this time's lifw promises a lot more transparency on the ramp and lots of T&A." (If you don't know what t&a means, read no further.)

Shobhana Bhartia, vice-chairperson, HT, when shown the story and the accompanying photo of semi-nude models, said, "These pictures and language certainly upset sensibilities. A decision was taken that we shouldn't have such pictures as our paper caters to the entire family, not just adults.However, sometimes things slip in." When informed that some paper vendors in east Delhi had been instructed by families to deliver HT without the supplement, she asked: "Is that really true?"

So now marketing men sit in editors' chairs and news reports are targeted and positioned with fine-tuned product attributes. They say the results show in the numbers. At 2.14 million copies, TOI claims to be the world's largest circulated English daily. The National Readership Survey ranks HT as numero UNO in Delhi with 12,57,000 readers. Says Bhartia, who has been trying to jazz up HT, with some success, "We want to develop a bond with our readers, especially the younger ones. We have the best analytical minds for our op-ed pages. We want people to grow with us so we have a mix of national and world news along with reporting from the mohalla (neighbourhood) level."

From Ravi Dhariwal, executive director, the Times Group's perspective, "The race is to capture younger minds." Proud of every brand extension, Dhariwal states: "It's always us who lead the market with pioneering strategies like invitation pricing that have paid off wonderfully." But is the toi a newspaper or a lifestyle? You can start your day with the Gayatri Mantra on a Times Music CD, drive to work listening to Radio Mirchi, lunch hours are for viva! at Planet M's Barista coffeeshops promoted by a Times family member, and evenings are for partying where Times Music DJs mix the beats. And after-hours for chat with strangers on www.indiatimes.com.

The secret is out: the Fourth Estate, like real estate, is up for sale. It's the numbers, stupid, not the news. Most papers and magazines today work to the marketer's 3F formula of Food, Fashion and Fornication. The first 2 Fs, editors openly admit, is a part of success, the third one they say doesn't play a part. But how do you explain a news agency report about Madonna turning to spirituality accompanied by a picture emphasising her cleavage? Social scientist Shiv Vishwanathan comments: "India must be the only country where at any given time 30 per cent of our population is trying to secede and we don't even know it nor do we care. And the real tragedy is that people still read papers and watch TV for the news."

But then the media's priorities have never been more stark and candid: feel-good "news positive" stories are in; and feel-bad stories have no place. Says P. Sainath, journalist and author of Everybody Loves a Good Drought, "While the total number of correspondents covering poverty at a national level is zero, the number of articles by journalists on the LIFW this year was 400. This makes for a 1:1 ratio between journos and buyers. We have 40 million unemployed in our country but not a single labour journalist." When Ajit Bhattacharjea, director, Press Institute of India, recently met the Uttaranchal CM, he found two editors also waiting to see him. "What shocked me was that they had come to get advertising proposals signed, not for any editorial purpose. Now they are muzzled."

Flummoxed by 24-hour news channels which saturate an event within hours, dailies have opted for a revenue-earning gambit called "Page 3". A good place to park your friends and reduce lawsuits for the maliks, says Pritish Nandy, MP and former editor of The Illustrated Weekly of India.

Delhi-based advertising executive Suhel Seth, who claims to be a not-always-voluntary fixture on P3, says: "I go to a book launch and next thing I am in the papers." He is angry that "P3 has legitimised people who should be ostracised or behind bars". Outlandish? Not totally. Many original P3 blondes have one more common factor besides their golden highlights—fathers or husbands who have been in jail for anything from tax evasion to smuggling.So, take heart, P3 pop-up Abhishek Verma, you are not alone in your FERA-gamo suits.

Politics, arts, sports, everything is now an "event" with a "fun" spin. Ram Jethmalani on a current affairs programme gets asked more about whether he will drink alcohol in Rashtrapati Bhavan than about realpolitik. When 'From Mohenjodaro to the Mahatma', a huge mural on which painter Jatin Das laboured for two and a half years, is unveiled in the Parliament Annexe, Das says:

The End Of Days