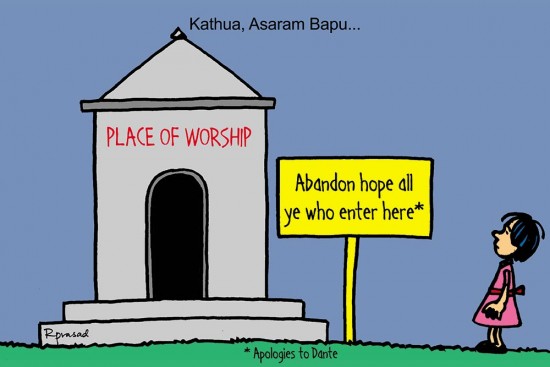 During his UK visit, the PM is believed to have discussed the extradition of fugitive Vijay Mallya with his counterpart, Theresa May. Sources say that May responded positively but wants a tit-for-tat. The UK has several pending extradition ­requests with India, but is ­concerned with expediting one in particular: Aman Vyas, who is wanted in the UK for several counts of sexual assault and murder. His crimes date to 2009, when he was in the UK on a student visa. The ext­radition request has been pending since 2011. We hear that diplomatic ­channels of both countries are ­seriously working on the exchange deal.

As Kashmiri expatriates in the US confronted former CM Omar Abdullah at UC Berkeley and one even called him a “war criminal”, Omar took the abuse calmly, saying it was just 45 seconds of an interaction that went on for over an hour. But National Conference spokesman Junaid Azim Mattu had a different response, tracing  the antecedents of Berkeley protesters in Srinagar.  He claims that one of the “Berkeley hecklers” is the son of an NC worker who sought asylum in the US in the 1990s by claiming that his life was under threat from militants in Kashmir. Another one is an absconder, evading arrest in Pak-occupied Kashmir on criminal charges of child kidnapping. Omar, meanwhile, is busy posting his pictures of cycling in San Francisco.

The cold war between Sasikala’s brother Dhivakaran and her nephew TTV Dhinakaran has turned hot. Dhivakaran described TTV’s new party, AMMK, as a mushroom with a short lifespan. TTV hit back, saying his party was more important than a few relatives and he would expel them if needed. Exploiting this, the ruling...