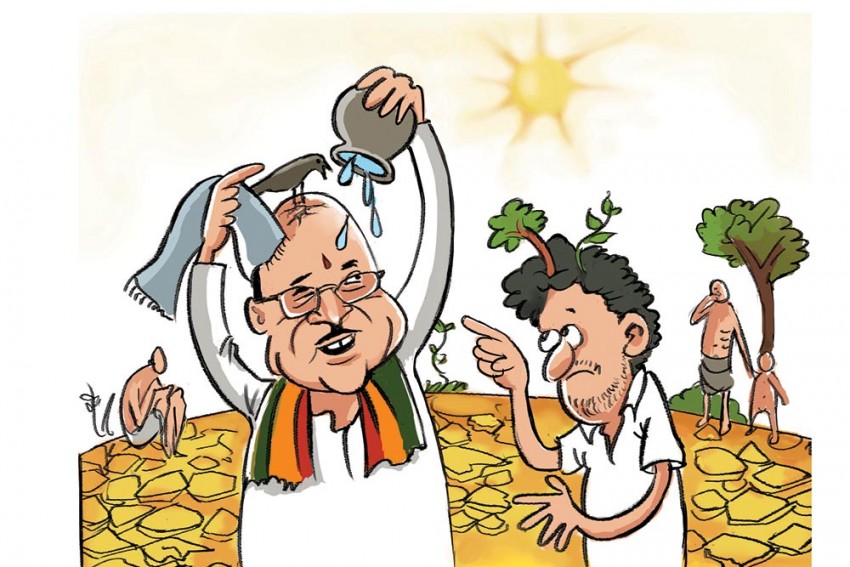 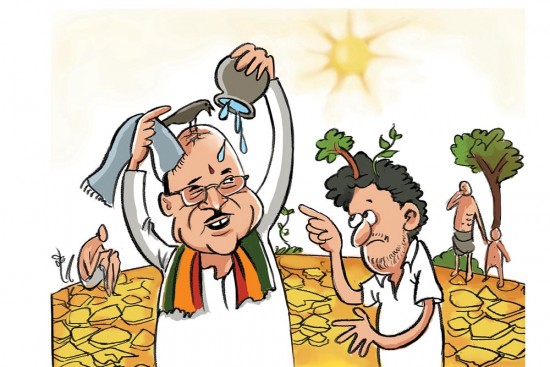 Madhya Pradesh
Going With The Flow

A glass of water and a towel is what Madhya Pradesh cabinet minister Antar Singh Arya orders before beginning his interaction with the people anywhere in the state. He pours the water on his bald head and then rubs it with the towel. “See, it’s almost dry,” he tells bewildered watchers, showing them the almost-dry towel. Then he summons from the crowd someone with a rich crop of hair. The experiment is repeated. The towel is soaked in water. “That is what trees do. They help retain water. So do plant trees and do not cut the existing ones,” he tells them, before moving on to other things. Some teaching aid this.

Ahead of a long-promised reshuffle in Narendra Modi team, the capital is abuzz with rumours, lobbying and kite-flying. The hot money is on journalist-scholar M.J. Akbar finally finding a berth. A much-rew­arded right-leaning intellectual is said to be eyeing the HRD ministry. What of Smriti Irani, you ask? Here’s another rumour that could make your head spin right off. It seems the former soap star is not on the long list of the party’s potential chief ministerial candidates for Uttar Pradesh 2017. Instead, she might replace Anandiben Patel in Gujarat next year!

It looks like Padma awards are so passe in Kerala. In Mollywood, a membership in either house of Parliament is the new style statement. With the BJP sending actor Suresh Gopi to the Rajya Sabha, and the Left putting actor Innocent in the Lok Sabha—he won from Chalakudi in the 2014 general elections—others are jostling to get there. The buzz is that Mammootty and media personality John Brittas, both known for their colourfully red leanings, are eyeing the Rajya Sabha. Mammootty is the chairman of the CPI(M)-run Kairali TV channel, while Brittas is its chief editor and managing diriector. If Mammootty gets there, can Mohanlal be far behind?

For someone who entered office with a reputation as an able administrator, Karnataka chief minister Siddaramaiah has had little going for him in that department. Last week, his government managed to stave off a strike threat by police constables, who have been complaining about work conditions. Then, separately, a young IPS officer, who was once the victim of a minister’s high-handedness, sent in her resignation, as she was fed up with getting thwarted again while doing her duty. Apparently, it was the ‘rum rajya’ at work. Go figure.

Heard Uma Bharati, who once complained that it took months to get an appointment with the PM, has now sought ‘top performer’ Nitin Gadkari’s advice on how to get files stuck in the PMO cleared

Overheard In an endeavour that would have done Pandit Nehru proud, the PMO is said to be finalising lists of “BJP-friendly” academicians and intellectuals to deliver lectures to civil servants