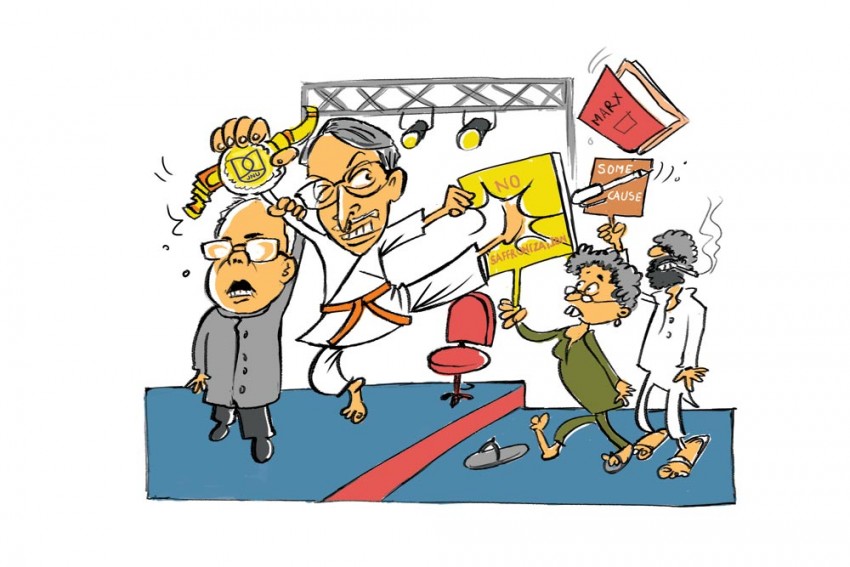 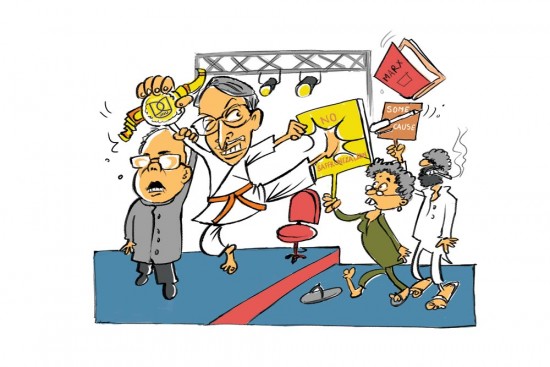 Much has been made of President Pranab Mukherjee backing Jagadesh Kumar as JNU’s new vice-chancellor over HRD minister Smriti Irani’s choice. Top IIT Delhi-wallahs, however, insist that there is more to the institution’s “gift” to its left-of-centre neighbour than meets the eye. Though Kumar is backed by impeccable credentials, he was viewed as reasonably RSS-friendly at IIT Delhi. Some say it’s a matter of time before JNU erupts in protests. What will make it interesting is that Kumar, a karate expert, is no pushover. The story goes that when an IIT hosteler got aggressive, Kumar closed the matter with karate moves.

The vocabulary of central Delhi, it is a-changing. Scribes invited for a press conference, where Sangh parivar functionaries were present, were puzzled at the use of chaste Hindi for matters mundane. Sangh men were seen dishing out calling cards, which would have possibly been dumped, as they usually are, except that something caught everyone’s eye. On the cards was mentioned ‘Bhraman Dhavani’ with a 10-digit number listed against it. Turns out Bhraman Dhavani stands for mobile. The test to be run now is, Shravan Kaushal, which stands for listening capability.

The Patidar revolt led by Hardik Patel last year sparked speculation of a bid to rattle Narendra Modi’s successor, Anandiben Patel. Now, reports in The Hindu that the PM has asked the CM to “dispel the perception” that her daughter Anar and son Shwetank had emerged as “parallel power centres” has lent it even more credence. The reported proximity of the duo to builders and real estate players has set tongues wagging. But what has led to raised eyebrows is the timing. Amit Shah, who was tipped to return to the state after the Bihar debacle, is now firmly in the saddle as BJP chief. That, and the anonymous source “close to her and the PM” quoted by the paper. So who was behind the leak, and why?

Conspiracy theorists are having a field day over Pranab Mukher­jee’s fuss-free assent for imposition of President’s rule in Arun­­­achal Pradesh. With over a year to go before Mukheree’s tenure ends, one view is officers who have served him at  Rasht­rapati Bhavan are looking for plum placements. Saurabh Vijay, a 1998 batch IAS officer, was sent off by the Modi government to the World Bank as executive director last year. Mukher­jee’s OSD Suresh Yadav, a 1994 batch IRS officer, too is said to be hea­ded there. Mukherjee’s addl secy Thomas Mathew is in the reckoning for the SEBI chief’s post.

Heard A former Union minister had the chattering classes all abuzz at the Jaipur literary festival with his latest companion, who was by his side at various events

Overheard When Press Trust of India editor-in-chief M.K. Razdan hangs up his other hat as CEO of the news agency by March-end, the role might go to a BJP-friendly journalist

The Parable Of A Slaughter