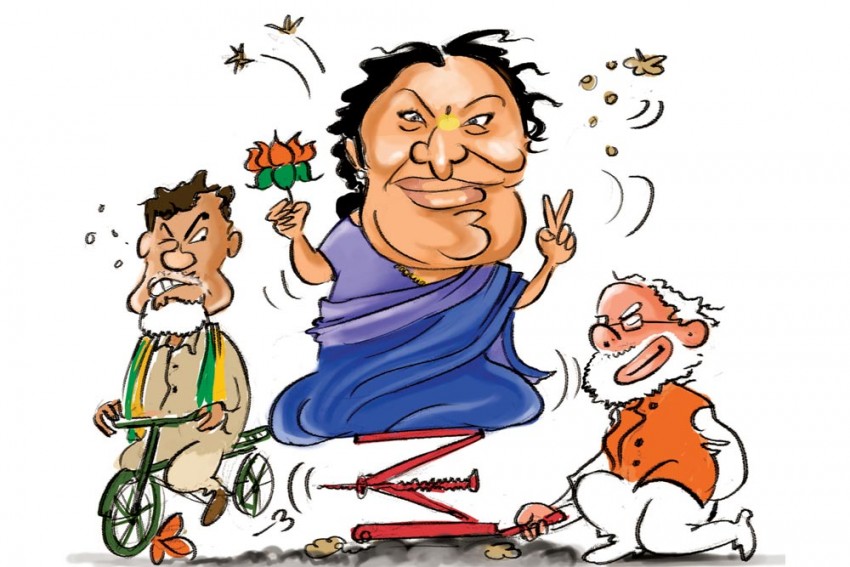 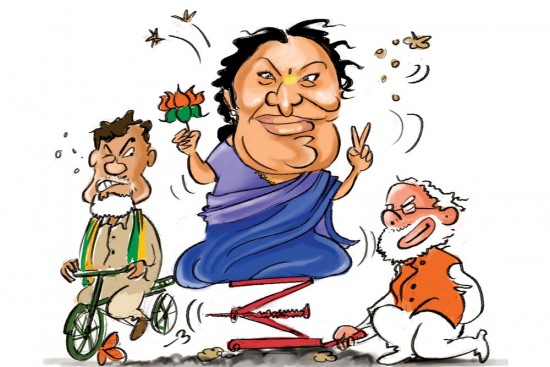 NTR’s daughter Daggubati Pur­andeswari, who joined the BJP last year, seems all set for a bigger role in the party. Curr­en­tly in-charge of the mahila morcha, the buzz is she may be in line for the state president’s post since incumbent, Visa­kh­a­p­atnam MP Kambhapati Har­i­­babu, isn’t keen on continuing. While Hari­babu is seen as Union minister Venkaiah Naidu’s man, Purand­eswari is the choice of other state leaders. But given her uneasy vibes with the CM (who is also her brother-in-law), her ascension may not agree with Chandrababu Naidu, though BJP sources say this is one way of reining in an ally. Yes, the two share power, but of late the TDP boss  has been grumbling....

With elections around the corner, Mamata Banerjee is fishing for talent. Rumour is the CM plans to rope in composer Bappi Lahiri and singer Kumar Sanu, both known to be close to the BJP, to join the TMC. The whispers gained strength after the state government conferred hon­orary awards on the duo. The move has caught state BJP leaders by surprise as Bappida contested the 2014 LS poll on a party ticket. Tho­ugh the “golden boy” lost to TMC heavyweight Kalyan Bandyopadhyay, the BJP considered him a star catch. Mea­nwhile, Sanuda hasn’t yet contested an election but Mam­ata may entice him with a ticket.

Who is the ‘KD’ in the CBI director’s visitors’ book? While the voluminous tome, said to have been compiled by the Intelligence Bureau to get even with Ranjit Sinha, is being studied by a Supreme Court-appointed commi­ttee, the buzz is that the large number of visits by ‘KD’ to the director’s bungalow aroused sufficient curiosity for the panel to probe and discover that it was not K.D. Singh, a former JMM-turned- TMC MP of the Republic of Chic­ken fame, but Ketan Desai, the controversial former president of the Medical Council of India. Desai is apparently very close to the BJP national president Amit Shah and is believed to be the de facto Union health minister.

Madhya Pradesh
Trouble In The Heart

Attempts to destabilise Shivraj Singh Chouhan, now MP’s longest-serving CM, have begun. And the team of the saboteurs is led by a senior cabinet minister. The heavyweight min­ister is busy collecting docume­nts to prove Shivraj’s complicity in the Vyapam scam and enjoys the backing of a senior central BJP leader, who has been sidelined by Modi & co. He’s also trying to prove the involvement of Shiv­raj’s family members in various scams. The minister believes he has a natural claim on the top post and also has a bone to pick: Shivraj has clip­ped his wings and, more imp­ortantly, curbed his money-making spree.

Heard After the Bihar debacle, the BJP has drafted in number-cruncher Prashant Kishor’s former colleague Shubhrastha Shikha for ‘special ops’ in Assam, ahead of the 2016 polls

Overheard Will the new year usher in wedding bells for a youthful former chief minister and a prime-time news TV anchor, both divorced and both hailing from the same state?