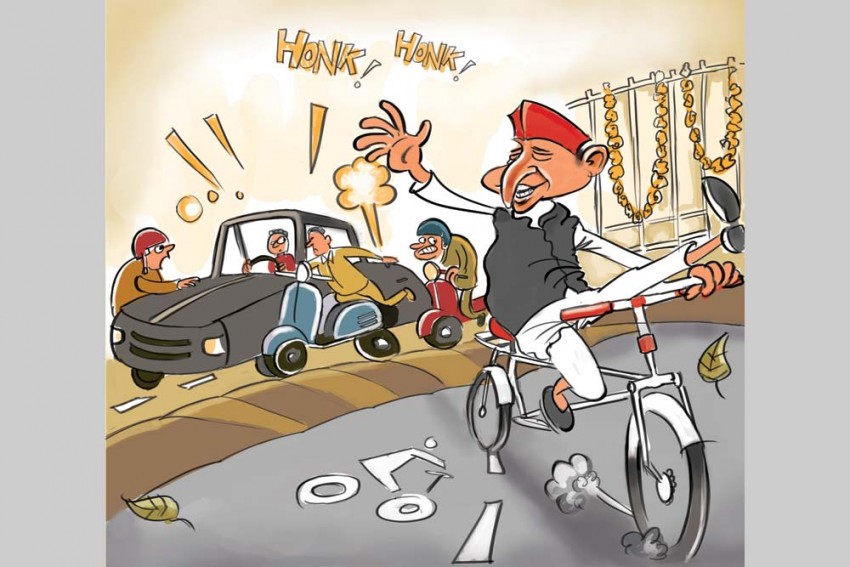 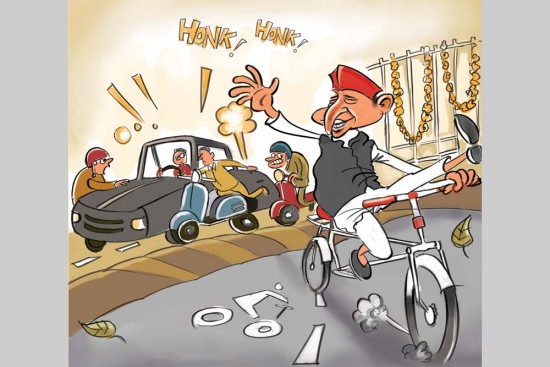 Heard: Surya Namaskar was dropped from World Yoga spectacle not because of Muslims, but because someone was not used to it

Overheard: Due to controversies involving the HRD ministry, the foreign varsities issue was taken to Niti Aayog, bypassing Smriti Irani

It may be the electoral symbol of the Samajwadi Party, but Akhilesh Yadav has made the bicycle a Big Wheel in the state capital, much to the annoyance of vehicle owners. Not only is the CM frequently seen straddling his bike, but almost every road in the city has seen the addition of a cycle track, regardless of how narrow it is or whether it encroaches on parking spaces. Insiders say that Yadav’s favourite destination is the Netherlands, where cycling is popular and roads are designed accordingly. Inspired, he decided to replicate the concept back home. Unfortunately, Lucknow is not Amsterdam, and Yadav’s cycle mania has seen the PWD department laying cycle tracks everywhere, even giving pedestrians short shrift. In Uttar Pradesh, power flows from the pedal.

The man behind Narendra Modi’s winning election campaign in 2014, Prashant Kishore, is now much sought after by politicians seeking votes, the latest being Nitish Kumar, who has hired him to run his campaign for the upc­oming Bihar elections. Kish­ore’s fame, however, seems to have gone global. The political grapevine is abuzz with news that he and his team have bagged a con­tr­act from a candidate for the pre­sidential elections due shortly in Tanzania, East Africa. There are 38 candidates, so it’s unclear who has hired Kishore, but the list includes the vice-president, the prime minister and Charles Nyerere, son of the country’s founding president, Julius Nye­rere. It is also possible that Kish­ore’s name was recommended by Modi, since he is reportedly quite close to the prime minister.

Most victims of Lalit Modi’s rev­elations were connected to him, which is why there is so much speculation around why he targeted President Pra­­­nab Mukherjee’s long-time aide Omita Paul. Modi hinted at a hawala racket involving Omita and a businessman, Vivek Nag­­­­­­pal. In Jaipur, the buzz is about a business rivalry betw­een Nagpal and Modi’s friend, Nitin Shah. Both compete for sup­­plying high-security regist­r­ation plates for vehicles. Omita’s name may have been used to target Nagpal and his alleged connection to her, but it dragged in the presid­ent. Rashtrapati Bhavan has filed a police complaint against Modi.

Maharashtra
Up in the Air

His return flight on Air India went pretty smoothly, but now all eyes are on chief minister Devendra Fadnavis, back from the US where he held several meetings in connection with his ‘Make in Maharashtra’ campaign. He had warned that he would file defamation suits against anyone writing falsehoods about his departure, when the Air India flight was allegedly delayed because his chief secretary, who was part of his team, had taken the wrong passport which did not have a valid US visa. Despite his warning, local papers have been quoting passengers who were inconvenienced because of the delay. He also has to make another tricky decision, whether to give the nod to naming a planned coastal road after late Shiv Sena supremo Bal Thack­eray. The Sena had been sharply critical of the Air India fiasco.