It is Team India and not Team BCCI, says the court 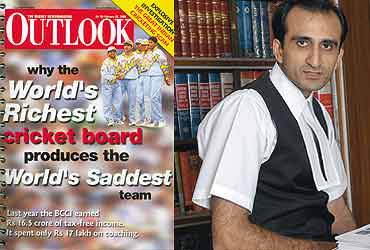 The judgement was necessitated because the Board of Control for Cricket in India (BCCI), since its inception in the late 1920s by a bunch of princes, has behaved as if the sceptre never slipped out of its hand, placing it above the law of the land. The board's refuge is its status of a private society registered as an association under Tamil Nadu's Society Registration Act of 1860, making it answerable only to its members—the 31 state associations.

The board took the same cover when two cricket-lovers filed a public interest litigation (PIL) in February 2000, seeking accountability and transparency in the way cricket is run in the country. The petitioners—lawyer Rahul Mehra and his friend Shantanu Sharma, both 26 then—were incensed at India's 3-0 loss in the 1999-00 Test series in Australia. More so because board secretary Jaywant Lele had predicted the result even before the team embarked on the tour.