Decline Of The Maratha Empire 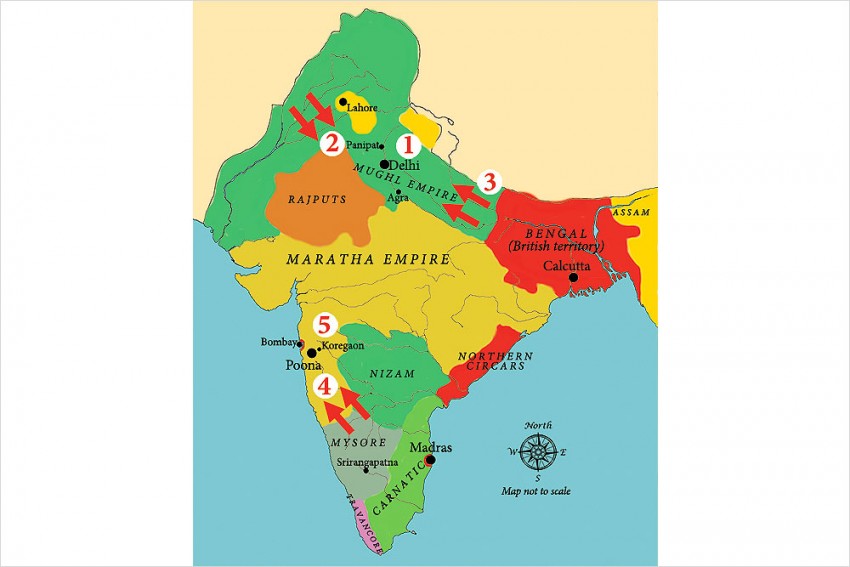 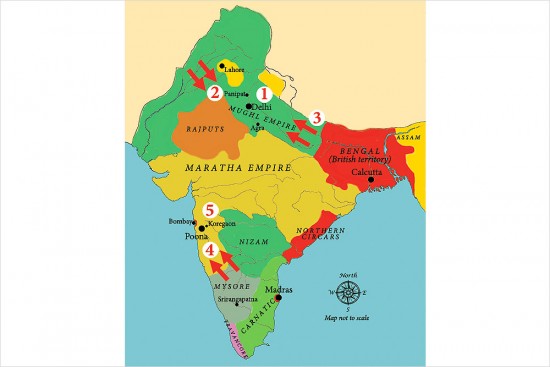 1. Following the death of Aurangzeb (1707), the Mughal empire declines. In the absence of an assertive central power, ­regional ­powers like the Marathas, Sikhs and ­Rohilla Pathans expand. The Marathas prevail, gaining control of Delhi (the emperor being a nominal one). 2. Afghan raider Ahmed Shah Abdali attacks India. Acting on behalf of the Mughal emperor, the Maratha army, led by ­Sadashivrao Bhau, meets the Afghans and is defeated in the Third Battle of Panipat (1761): the first big dent on what was till now an expanding Maratha power. A vacuum awaits the British. 3. A new power was rising in the east. The British defeat Bengal’s Nawab Siraj-ud- Daula at Plassey (1757), and a combined force of the Mughals, Oudh, and ­Bengal at Buxar (1764). Thus they gain diwani rights over Bihar, Bengal and Orissa. Soon they turn their gaze towards Delhi. At the Battle of Delhi (1803), General Lake (left) defeats the Marathas and pushes them southward. 4. Meanwhile, Arthur ­Wellesley (right, the future Duke of ­Wellington), having only recently eliminated the threat from Tipu, ­pushes the Marathas from the south. He ­defeats them at ­Assaye, Ahmednagar and in many other skirmishes. The ­Second Anglo-­Maratha War (1803-1805) ­concludes with a number of treaties that  cripple Maratha power. 5. The Third Anglo-Maratha War (1817-1818). Peshwa Baji Rao II attacks Poona residency. The British strike back. As the ­Peshwa flees, a small ‘British’ force, which has Marathas, Muslims, Mahars, Jews, follows him. He makes a stand at Koregaon on the Bheema river, but is defeated. Peshwai is abolished.