Nobody really knows how he manages to be so quick off the pitch. Adding to the deception that his diminutive figure offers, his run up too is slow. But mysteriously the ball goes like a bullet. 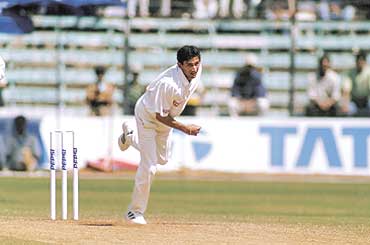 outlookindia.com
-0001-11-30T00:00:00+0553
I first saw Ajit Agarkar when I was the chairman of the selection committee. Part of my job was to be on the move and spot budding talent. I used to watch a lot of club-level matches. It was in one such match that I saw this frail, little guy bowling deceptively fast. His deliveries would just kiss the pitch and take off like a rocket. Even then he was considered some sort of an all-rounder.

When I first saw Agarkar bowl, he reminded me of Ramakant Desai with whom I have played Test cricket. He too was small and frail but could bowl very quick. He had the audacity to bowl bouncers to the West Indians in West Indies. Agarkar is the modern avatar of Desai, in shape, form and attitude.

After impressing at the club level, Agarkar later went on to play for Mumbai and then the country. Frankly in the beginning I was not very sure if Agarkar could make the big league. Though he was quick, he conceded a lot of runs and his batting was inconsistent. But this lad from Shivaji Park lived up to the early promise by racing to 50 wickets in one-day internationals faster than anyone else—breaking the record held by none other than Dennis Lillee.

When he burst onto the Ranji Trophy scene, he picked up a lot of runs and wickets. Though he had come into the Mumbai side as a bowler, he was quickly recognised as an all-rounder. After the Lord’s century, he is exactly what the Indian team needs at the World Cup.

People have always commented on how Agarkar may be expensive but somehow he always takes wickets. Agarkar is a typical wicket-taking bowler. Nobody really knows how he manages to be so quick off the pitch. Adding to the deception that his diminutive figure offers, his run up too is slow. But mysteriously the ball goes like a bullet.

He is not afraid of trying variations or of experimenting. He has a lovely outswing, a good slow delivery, a well disguised off-spin and a very mean bouncer. Agarkar has been working on the cutters for some time now and I believe he is close to perfecting them.

He has a big heart and a great spirit. Nothing scares this boy, nothing worries him. When Agarkar is down in the bins, he works harder on his game. I would describe him as a very brave, young lad.

There is an understandable discussion on cricketers from small town India. Everybody is praising their quaint attributes. But there is something very special that cricketers from the metros have brought to Indian cricket, especially those from Mumbai.

Ajit Agarkar symbolises all that is good and alive in Mumbai cricket. Forget the talent for an instant. The mind of a Mumbai cricketer is very interesting. Playing for Mumbai brings with it all the effects of playing international cricket. There is the media focus, there is criticism, some days you are out of the team, you can never take your place for granted and there is a lot of pressure.

As a Mumbai cricketer, Agarkar finds it easy to navigate through all the odds and come out stronger. He is used to playing a lot of cricket and so it never really tires him out. He is also used to criticism and never takes it in a defeatist manner.

He was going through a very bad patch the last time India toured Australia. His batting had plunged to new depths. He scored so many ducks that every time he went out to bat, the crowds would start making noises. He never felt humiliated. I asked him once, after the tour, how it felt batting in Australia. He said, "I don’t know. The bat never touched the ball".

He has a strange sense of humour. But he is normally known as a quiet serious chap, who is very focussed about the game. I hear that with close friends he opens out and is just another fun-loving boy.

One of his biggest advantages is his friendship with Sachin Tendulkar. Sachin, the people who know him well will tell you, is wonderful to his friends. In fact, I would say that Sachin has been a great contributing factor to Agarkar’s batting. He is always giving him tips and helping him improve.

Agarkar today has all the strokes in the book. He has not been fair to his batting skills but now the time has come to show the world what he can do with the bat.

But essentially his core worth to the team is his bowling. Sachin always asks Agarkar to bowl to him in the nets, especially for the booming short-pitched balls he specialises in.

Ajit Agarkar symbolises all that is traditional and good in our middle-class society. He respects talent and age a lot. A trait very obvious in his behaviour. I believe that this nice, modest boy will go a long way. He has begun his true ascent in the Indian team as an all-rounder. His courage of conviction will stand by him.

It is his sheer fearlessness that makes him experiment time and again and pick up big wickets. And it is the same fearlessness that makes him an exciting batsman to watch, especially in the limited overs game. He goes by his instinct. As a hardworking boy he has been systematically correcting his flaws. I think he should keep working on the in-cutter that could be lethal at his pace. He should try to get that in-coming delivery to come in much sharper. He has developed a good reverse swing that will be very useful in the slog overs.