The cultural harvest season of old Madras lives and thrives in a new age. Two sisters on their journey. 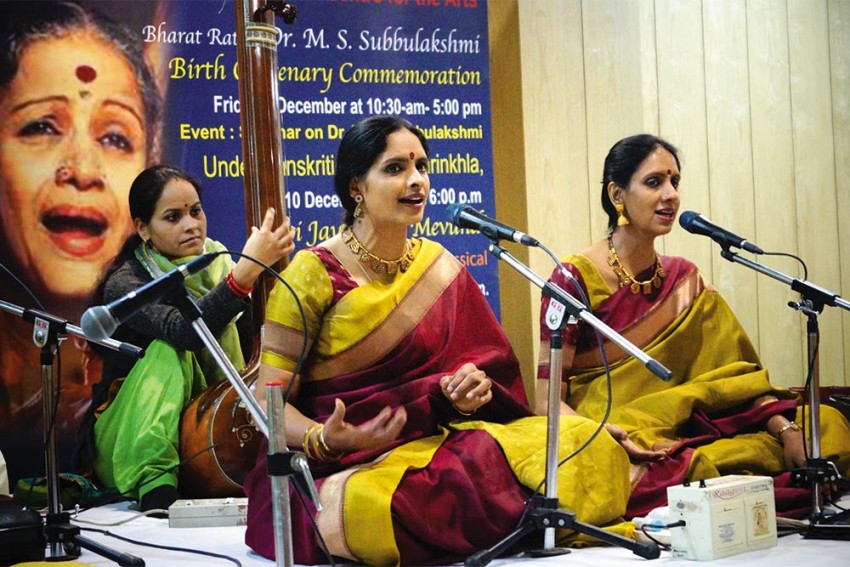 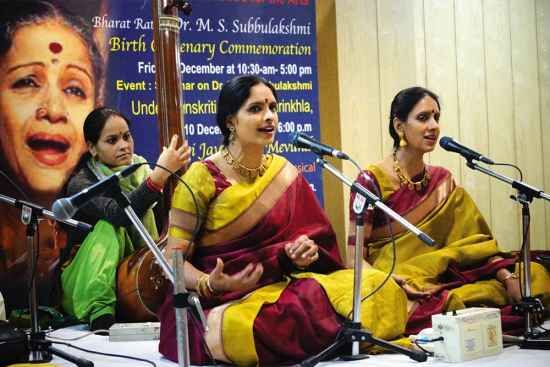 During their school days in Bombay where they grew up, the two sisters would visit Madras on a pilgrimage of sorts around Christmas vacation every year in the 1980s. In the rain-cooled Tamil month of Margazhi, the land of their forebears would see them in a breathless but pleasant frenzy—hopping sabhas, chasing down the masters, soaking in as much music as possible. Today, Ranjani-Gayatri are residents of the southern metropolis, where yet another ‘December season’ keeps them busier than usual as performers.

In their forties now, the siblings are accomplished vocalists. On stage, their tryst with Carnatic began as instrumentalists. In fact, their first brush with the Margazhi festival was a 1988 violin recital—two years after they debuted in a temple close to their Matunga home back in Bombay, having spent their childhood years learning from T.S. Krishnaswami Iyer. Mridangam exponent Karaikudi Mani spotted the two talented little sisters, and introduced them to the katcheri circuit in his resident city that had become the hub of Carnatic music by the 20th century.

Talking to Outlook before the curtains went up for a winter evening concert in smog-ridden central Delhi, the duo recall the array of icons who occupied the front row during that long-ago concert. Gayatri, at 40, three years younger than Ranjani, starts off on the roster…“D.K. Jayaraman, M. Chandrasekharan, S. Kalyanaraman, the Sikkil sisters…” and trails off, still in awe. The warm feedback was validation: of their open, eclectic style as much as of their talent.

The rest of the season was spent in total immersion. And not just the classical, says Ranjani. They would be there at the temples that dot the suburb of Mylapore at the break of dawn and join the devotional veedhi bhajanai perambulation. “A quick idli-sambar at Rayar’s café, and then we’d be there at the Music Academy for the morning lec-dems.” Then, across venues, a grand line-up of afternoon and evening concerts, spilling over to dinner time, “by when we’d be occasionally nodding off, yet eager not to miss a moment’s bliss”.

December, after all, is a unique time to wade through the entire gamut of Carnatic music in “that three-km radius” of downtown Chennai. In quantity, the Margazhi season has grown by leaps and bounds since the mid-’90s. Today, it’s billed as the world’s biggest festival of traditional arts—primarily south Indian classical music and dance—with around 1,400 programmes featuring no less than 750 artistes in six peak weeks. Co-hosted at over five dozen big and small venues, the extravaganza warms up by the second week of December, slightly ahead of the actual Margazhi month, and extends to mid-January, fringing on the winter harvest time of Pongal.

The sheer volume has its pluses and minuses, say the sisters, who branched out to vocals 15 years ago and still take classes from P.S. Narayanaswamy, an octogenarian of the Semmangudi stream. “The best thing is that the season helps a buff get a digest of contemporary Carnatic. There’s practically no noteworthy artiste who does not perform there,” points out Ranjani. “All you need to do is prioritise your schedule and track down your favourites at the sabhas.”

That in no way means the music clubs showcase just celebrities. “In fact, the sabhas do a lot of grassroots work. Up-and-coming artistes are customarily given slots,” says Gayatri, who was just 10 when she gave her first violin performance along with Ranjani on that distant Matunga evening. On the flip side, quite a few promising youngsters struggle to make it to the top. The festival has a handful of leading artistes who draw massive crowds alongside another set who have a relatively low but highly loyal following.

The vastness of the canvas that unfurls at Margazhi can be guessed at from one little nugget: Ranjani and Gayatri try to ensure minimum duplication of ragas and compositions at their recitals across auditoria. The main pieces and tunes are never repeated in one season, says the younger sister. “You can’t completely guarantee it, of course. We, too, get audience requests for this kriti or that abhang,” she shrugs. “It’s a happy obligation.”

The fanfare around women in Carnatic comes with a pinch of gender bias. “We have vidwans and rasikas who still believe that female artistes who manage to earn popularity are those without scholarship. To them, men alone can be insightful and yet be sought-after,” says Gayatri. “It’s assumed that ladies primarily thrive on glamour. Only those with merely two-and-a-half people listening are supposed to be vidwans.” The sisters prefer accompanists who go well with their approach to laya. “One unnecessary note from the violinist—howsoever correct technically—can mar our essence of unison.”

It’s exactly a quarter century for Ranjani-Gayatri now of having been regulars at Margazhi—from 1992, they have been busy every year. So how many concerts do they give through the season? Not more than ten of late, besides the occasional violin outing. “If we start accepting all the invitations, we’ll end up performing 35-plus. That will be crazy,” says Gayatri. Does being selective go with stronger sadhana? “Well,” Ranjani answers with a benign smile, “focus is integral to our everyday music. We don’t wait for Margazhi to sharpen it.”