The deadly attack comes after ULFA had talked peace 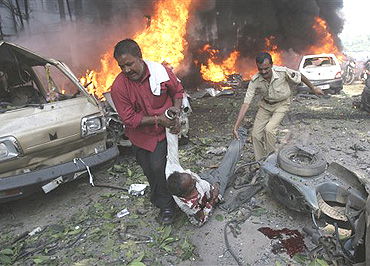 outlookindia.com
-0001-11-30T00:00:00+0553
When the nation's attention was focused on the faraway arrest of a sadhvi for the Malegaon blasts came a brutal reminder from the Northeast: a string of 13 blasts across Assam on October 30, shattering the fragile calm of the last six months. Five of the blasts were in Guwahati. The toll at the time of going to print: 61 killed and more than 300 injured, dozens critically. By far this is the deadliest attack that Assam has seen, and, as usual, the suspect is the United Liberation Front of Assam (ULFA), formed in 1979 with the objective of creating a "sovereign, socialist Assam".

Diwali had passed off peacefully, so the security establishment was caught completely off guard. In Guwahati, where 31 people were killed, the targets were well-chosen: the busy Ganeshguri square, less than a kilometre from the chief minister's secretariat; the crowded area near the deputy commissioner's office; and the business hub of Fancy Bazaar.

The other blasts took place in the western towns of Kokrajhar and Barpeta Road. The first is the headquarters of the Bodoland Territorial Council (BTC), run by Congress ally Bodo People's Front (BPF). 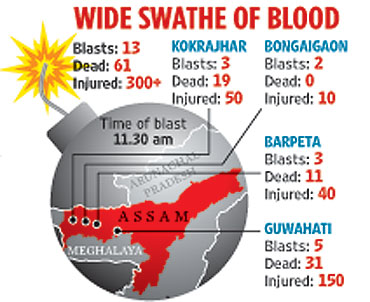 Says Subhas Das, Assam's home commissioner: "The terrorists blew up cars and auto-rickshaws packed with explosives in three of the blasts in Guwahati. Initial reports indicate the use of potassium nitrate." But police do not rule out the use of plastic explosives like PE3, which are quite similar to RDX.

The authorities appear to have been complacent, particularly after the June ceasefire with ULFA's "28th battalion", its potent strike force. The so-called Alpha and Charlie companies of the "battalion"—the 'Kashmir camp'—had reached a truce with the state government, promising to help resolve the problem of insurgency peacefully.

Then came news, attributed to the police and the pro-peace ULFA faction, that the "709 battalion", active in western Assam, was also willing to talk peace. Its commander Hira Sarania, it was bruited, had a serious ailment. Many were of the opinion that in time Sarania would give up violence. That, the authorities came to believe, meant a virtual end to ULFA troubles.

After the blasts, people on the street were angry both with the terrorists and the government. The ULFA has been quick to deny by e-mail any hand in the blasts. "We are not in a position right now to pinpoint who is behind the blasts. But ULFA's denial does not surprise me, for the group had denied many things in the past," says B.J. Mahanta, Inspector-General of Police.

This terror strike has dangerous ramifications. If it is the ULFA that has carried out the blasts, it would mean that the rebel group is ready to drive home the message that it is not a spent force. If it has executed the blasts with the help of an Islamist terror group, as some in police and intelligence circles believe, it would mean that the streets of Guwahati and other parts of Assam could witness more car-bomb attacks. And finally, if the ULFA is actually not behind the explosions, the question arises as to whether an invisible third force has made its entry into Assam. For investigators, the task is challenging indeed.