In their deadliest blow ever, the Maoists render state might a mite impotent 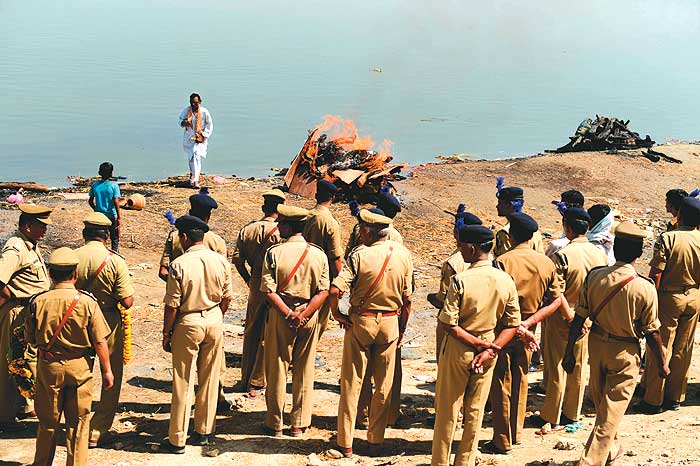 The air in the jungles of Dantewada district must have been thick with the foreboding of doom, but the jawans of CRPF’s Alpha company were perhaps too tired to notice. Setting up camp in a shaded clearing about six km from their base camp in Chintalnar, all these men of the 62nd Battalion would have been craving for was a few hours of sleep. As they slept, however, two companies of 220 men of the People’s Liberation Guerrilla Army (PLGA) crept up, surrounded the virtually unguarded camp and assumed positions on the dominating features around. At around 5.25 am on April 6, the 34th hour of an ongoing area domination exercise undertaken unilaterally by the CRPF, they fired the first shots.

It was two companies of 220 PLGA men—not thousands—which attacked the men sleeping in a clearing.

In the next 30 minutes, the battle became a turkey shoot as the Maoists killed the startled CRPF men at will, showering them with a merciless hail of bullets. As some CRPF personnel managed to radio back for help, a fresh team of Bravo company set out for Chintalnar. Unfortunately for them, the Maoists had anticipated the arrival of reinforcements as well. Not only had the PLGA cadres laid IEDs and pressure mines along the road that would lead to the Alpha company camp, they had also set up machine guns at tactically sound positions.

So, as the bullet-proof vehicle sent from the CRPF base camp wended its way through the route considered safe by security forces, it came across a typical ambush tactic—a tree trunk blocking the way. As the special police officers (SPOs) jumped out to clear it, the Bravo company commander decided to take the other route, perhaps forgetting in his nervous haste that it was prone to Maoist-laid mines. Within minutes, the vehicle drove over a powerful pressure mine and was blown to smithereens.

By the time the first reinforcements could arrive at the Alpha company’s makeshift camp, 76 men, including deputy commandant Satyavan Singh, assistant commandant B.L. Meena and the lone representative of the Chhattisgarh police, head constable R. Siyaram Dhruv, lay dead. The attack, which had begun with intensive fire from all sides, progressed to PLGA men lobbing grenades at the CRPF jawans. Several petrochemical bombs too were lobbed into their midst, burning several CRPF personnel alive. Those who survived probably pretended they were dead even as the Maoist attackers quickly gathered the weapons of the fallen CRPF men and melted away into the jungle. 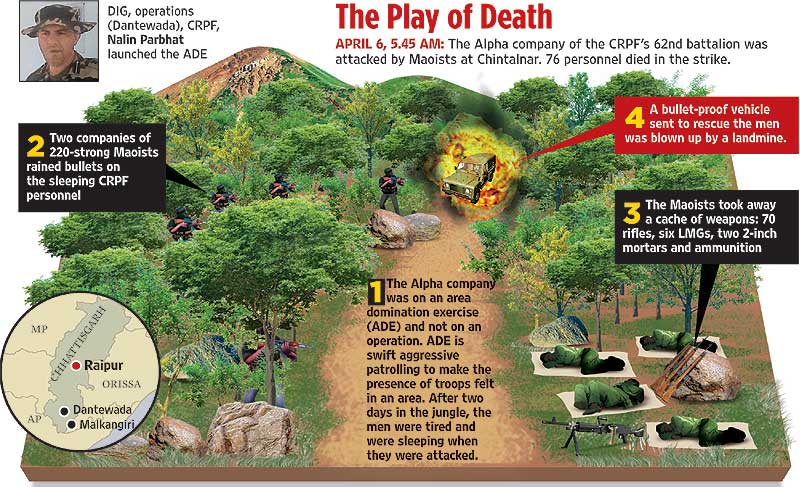 For a nation at war with itself, the April 6 attack was in many ways the tipping point in the battle between the Indian state and the CPI (Maoists) for the tribal heartland. It does come as a loss of face to Union home minister P. Chidambaram’s offensive—Operation Green Hunt—which began across six states last year. But more than inflicting a tragic loss of men and material—the Maoists picked up six light machine-guns, several two-inch mortars with high explosive (HE) ammunition, over 70 AK-47s and INdian Small Arms System (INSAS) rifles and a few pistols, grenades and ammunition—they displayed a hitherto-unseen lethality. Questions on the overall strategy must naturally follow. But for the moment, confounding security officials are the contradicting statements and circumstances that have surfaced around the attack. Among the several disturbing questions that have arisen on the precise circumstances leading up to the attack are:

While a systematic effort is under way to brush these issues under the carpet, the uncomfortable fact is that the CRPF is perhaps just not ready to take on a major offensive against the Maoists. Last year, it was hit nearly 68 times by the Maoists while the state police rarely saw an attack on their positions. Worse, it took CRPF director-general Vikram Srivastava two days to land at the site of the attack and visit his troops at the base camp. While morale has plunged new depths, the overall CRPF leadership seems to be still missing from ground zero.

This attack, however, could be the turning point in the offensive against the Maoists. Chhattisgarh DGP Vishwa Ranjan told Outlook that the offensive will continue. “We will continue to build our troop levels and plan our operations better.” While CRPF DG Srivastava declined to comment on the incident, he expressed his grief at the death of his men in Tuesday’s attack.

That won’t deflect basic questions on the CRPF, though. Its preparedness is limited by a defensive mindset and its standard operating procedures dictate that its troops won’t operate beyond eight km of their base camps. The men are also unfamiliar with the terrain since they are largely drawn from the states of UP, Haryana, Rajasthan and Bihar and are unfamiliar with jungle warfare. The troops do undergo a refresher course before being deployed in the state, but it has clearly proved to be inadequate in the light of Tuesday’s gruesome strike.

As for the two PLGA companies which attacked the personnel, intelligence reports indicate they dispersed with their captured weapons and have returned to the forests of Malkangiri district in Orissa. As per procedure, all captured weapons must be submitted to the central committee before being reassigned to their cadres. A smaller group is believed to have fled towards the dense forests of Abujmarh bordering Maharashtra.

Will the attack become the harbinger of more bloodshed, as the state renews its pledge to wipe out what PM Manmohan Singh termed the gravest security threat to India? A systematic escalation of violence seems inevitable—but without tactical soundness or the desire to keep the tribals away from the crossfire, it may achieve nothing. A one-man inquiry committee headed by former DGP E.N. Rammohan has been set up. But the biggest challenge in not letting this become an unending cycle of violence will be to match deployment with efforts to wean the adivasi away. High rhetoric will not suffice.

Masons To The Wall