Death In The Beef Market

A ray of hope in Dhule. Unfortunately, it wasn’t the police force. 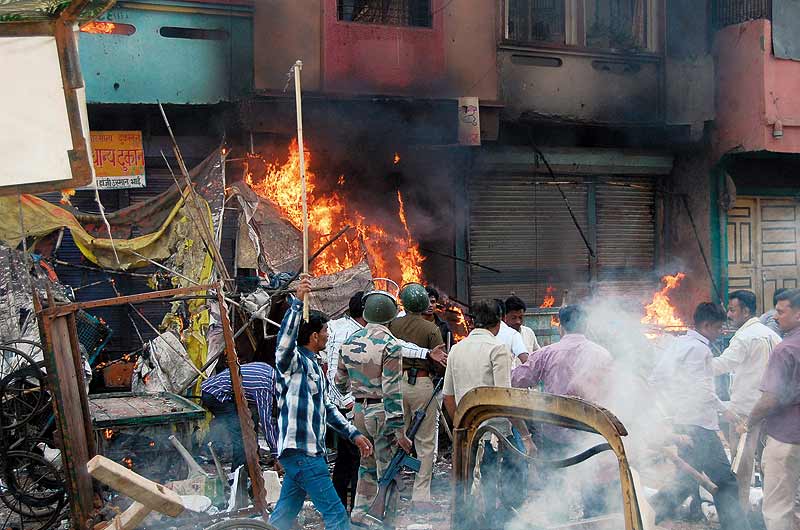 On January 9, 2013, Dr Vipul Bafna of Sahas Critical Care Centre in Dhule, north Maharashtra, received a strange request from Inspector Kohli of the local Azadnagar police station. He wanted Dr Bafna to surrender the bullets removed from the shooting victims brought to the hospital after the recent riots. The good doctor politely declined, demanding a proper medico-legal procedure, including witnesses and forensic experts, to ensure that the evidence is not tampered with.

Ironically, Kohli, one of the policemen accused of indiscriminate firing, made the request just three days after the shooting. At least 10 other policemen were also involved in the incident which left six Muslims dead and 36 people critically injured, all from the Machibazaar locality. On the ground, we found bullet marks at some 10 spots in the bazaar, all aimed at small businesses of the minority community—Aslam Egg Stall, Star Fish Centre, Mohammed Kalim Mohammed Shahbaz Jalebiwala, Haroon Rashid Abdul Aziz Bakriwala and the entrance of the beef market itself. It begs the question: why were so many shots fired here and why did the police specifically target these small establishments?

Another request for the evidence came from the local crime branch two days later, on January 11, which again Dr Bafna firmly declined. Nine of the 11 bullets now lie in sealed plastic packets in his office locker at the hospital. They will be crucial evidence in the judicial inquiry into the police firing on January 6.

A short walk from the terror-struck locality, Sahas hospital, located on an 80-feet road—the self-demarcated ‘border’ between the Muslim Machipura and the Hindu localities of Dhule just behind—was a natural choice for the desperate victims. No one was turned away here. Vipul and his wife, Dr Madhuri, along with other staff members, worked for 40 hours at a stretch to save some of the victims. But even as the first one was arriving in the ER at 5.30 pm, Dr Bafna was getting calls from some in the majority community exhorting him not to admit the injured (the advice leaned on the idea that Muslim mobs would gather and become a threat to the hospital). “I told them nothing would stop me from doing my duty. We worked as a team, the ICU under Dr Ashwini Bhasin provided trauma care and, once stable, we undertook the vital (read life-saving) surgeries. We needed some 90 bottles of blood in the first hours,” says Dr Bafna.

Khalid and Chand, two of the survivors, will have to live with a leg amputated due to the gangrene that had set in. Chand recovers now in a Pune hospital, but Khalid is still admitted in Sahas. Treatment for all the injured, including ongoing care, will be free at Sahas. Dr Madhuri showed me photos from some of the operations—liver ruptures, pelvic wounds, a bullet in the upper cheek which narrowly missed the eye. What hit home in all this was that the narrative of numbers around the Dhule violence would have been radically different if the hospital response had not been what it was. Many more Muslims would have lost their lives that day.

The violence in Dhule is not just about the three brutal communal riots (2008, ’10 and ’13) from the last 6-7 years. Behind the facade is the growing animosity fuelled by the political classes and their accomplices in the illegal drugs, oil pilferage and other mafias. Unemployment is rampant, and a ghettoisation that fuels violence and a separateness of the mind is a lived reality. In 2008, property worth crores was gutted,  but little justice came by way of the townspeople. This time around, vociferous demands for a judicial inquiry (made nationally) forced the state into action. But this is not a problem of Dhule alone. Dhule, Maharashtra and India also have to deal with the fact that behind these selective killings is the consistent allegations of bias in the functioning of our police. It’s another reality we seek to deny. After the 1992-93 Bombay riots, ACP, state intelligence, V.N. Deshmukh had told the Srikrishna Commission of the dangerous levels of communalisation in the Bombay and Maharashtra police. Other senior policemen—be it ex-BSF chief K.F. Rustomjee, former Punjab DIG Padma Rosha or Vibhuti Narain Rai of the UP cadre—have all been upfront in their concerns. Yet nothing in our recruitment procedures equips the man or woman joining the force with the requisite constitutional values of equality and non-discrimination and screens them for caste or communal bias. Communal bias, especially the institutionalised kind, remains the dark underbelly of our system, a cancer eating away which we are loath to confront.

Meanwhile, speculation around the powers of divine justice is rife once again in Dhule after the death of Inspector Kohli’s writer, K. Wagh, a rather sudden death two days ago. Was it a heart attack or suicide brought on by the stress and guilt from the interrogations into police misconduct?

Cactus To The Kamala