Local experience helps contain plague in a Himachal village, before it could turn epidemic 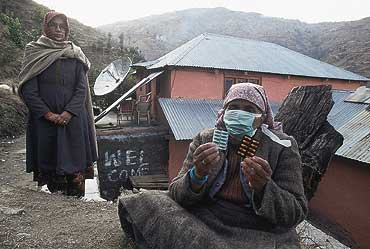 outlookindia.com
-0001-11-30T00:00:00+0553
On any given day, the outpatient department at Rohru's civil hospital is bustling with nearly 400 people queued up before wards, waiting to see the doctor. But since last fortnight, the hospital that caters to the 25,000-strong population of this far-flung hill town, about 100 km from Shimla, has been wearing a deserted look.

It's not just the hospital. The busy marketplace has no customers either. The school's closed till month-end. The bus stand looks abandoned, with no discernible movement. The inhabitants prefer to stay indoors and look anxiously at every ambulance that moves in and out of the hospital. This small prosperous town of apple orchards made shocking headlines for an entire week due to an outbreak of lethal pneumonic plague that claimed four lives in a single family, as 11 others continued battling for life.

Despite the fact that no new cases of plague have been reported since February 14 and the official announcement that the epidemic has been contained, the scare hasn't lifted. Initial panic has now diminished to a still-palpable concern. The masks and a variety of antibiotics that sold like life-saving gears to fight plague in the town are still in good demand.

At the Rohru hospital, a team of 12 doctors is currently attending to four plague patients in an isolation ward. The hospital played the most crucial role in diagnosing the 'mystery illness' as suspected plague in the initial stages after it received the first patient, Randheer Sauhta, on February 4.

Among the various theories that are being propounded to explain the exact outbreak of the disease in a single family of nearby Hatkoti village, that of the doctors at the Rohru hospital appears to be the most credible. Dr R.L. Sharma, senior medical officer-in-charge of Rohru civil hospital, says: "Randheer, the first victim, had gone to his father-in-law's house at Kelwi village in Jubbal, on January 26, along with his brother-in-law Purshottam. Both of them went to Murl forest area for hunting and stayed there for two to three nights." Although it's not confirmed, because the family has not been forthcoming with all the details, it's believed that they hunted some game and consumed its meat.

Significantly, hunting is prohibited in the Murl forest area. However, small-time hunting activity is an adventurous sport for the residents of nearby villages, who often venture into the forest for some recreation. The forest and surrounding areas are known for a huge rodent population. It's suspected that the animal hunted by Randheer was infected with the plague bacillus, Yersinia pestis, transmitted by fleas from an infected rat to the animal.

Says Dr Sharma: "Randheer returned on February 2 to his village Hatkoti. According to his mother, he was already ill. On February 3, he reported to Jubbal civil hospital and took some medicines for running fever, cough and chest pain. When his condition deteriorated, Randheer was brought to Rohru at 10.30 pm on February 4. He succumbed within three hours."

On February 8, Randheer's wife Sulochana was brought to Rohru with similar symptoms. She was rushed to the Post Graduate Institute of Medical Education and Research (pgimer), Chandigarh, where she died on February 14. On the same day, Krishna, a relative of the Sauhtas, was admitted to Rohru hospital with similar symptoms. Another Sauhta kin, Pushpa, who was visiting Randheer's family from Banpur, Uttaranchal, was also brought to Rohru at 10.30 am, where she died at 3 pm. When Hapinder and Damayanti, Sauhtas' neighbours, reported similar symptoms to the Rohru hospital, the doctors, who so far were studying the disease pattern with great alacrity, were convinced that the disease was plague and started clinical and prophylactic treatment.

Currently, four patients are in Rohru, one at the Indira Gandhi Medical College (igmc), Shimla, and another six at the communicable diseases ward of pgimer. Two children from the Sauhta family have also been admitted to the advanced paediatric centre of pgimer. Says pgimer director S.K. Sharma: "Out of six, five patients have shown improvement. One is still running a high fever. Various departments, such as those of internal medicine, microbiology, and social medicine and epidemiology, are engaged in treating the plague patients. They are being given wide-spectrum antibiotics."

He adds that as a prophylactic measure, all those who have come in direct contact with the patients are being given antibiotics. Further, great care is being taken in fumigation of patients' cubicles and disposal of their wastes. A far more extensive action is on at Rohru and Jubbal. Plague has not hit Rohru for the first time. The same region had seen it twice before—in 1965 and 1982. Dr R.L. Sharma, who personally handled the plague cases in 1982, says: "Then eight patients had died of plague that broke out at Tangnu village in Chirgaon." His previous experience played a crucial role in preventing the further spread of the disease.

So, while the bacilli were still being cultured at pgimer and the National Institute of Communicable Diseases, New Delhi, and the official confirmation of the epidemic was withheld to meet the who guidelines, Rohru civil hospital doctors launched a massive screening drive on their own.

"We noticed that almost all the patients who reported at the hospital here or the pgimer belonged to the same village and the same family. We screened each and every person in that family and other locals who came in direct contact with them during the past week. The human chain was thus followed closely and all such persons were brought under close observation and given antibiotic treatment," says Anuj Gupta, medical specialist at Rohru hospital.

Treating Hatkoti as the centre, a circle of 5-km radius was drawn for prophylactic measures. "From local cable TV telecasts to distribution of antibiotics like doxycyclines and tetracyclines, the drive was carried out effectively by the local doctors. And this was much before the administration did anything to control the epidemic," says Pratap Singh Mukhia, a local lawyer. Says another resident, Ashok Syunta: "It was such a serious matter, but neither the health secretary nor the district commissioner bothered to come to Rohru. Even the state health minister, J.P. Nadda, paid a customary visit as late as February 17, 12 days after the first death had occurred on February 5."

But local doctors could not wait for the administration or the experts in Delhi. As they themselves admit, the luxury of taking chances or waiting for official declaration of plague was just not there, considering that its pneumonic strain is the most lethal compared to the two other forms: bubonic and septicaemic. "In pneumonic plague, the bacillus directly affects the lungs. With an incubation period of one to four days, the pneumonic variety can cause death by the time the patient realises that something is seriously wrong. Further, it spreads by droplet infection, making a whole lot of people vulnerable," says Ravinder Sharma, state medical officer posted at Rohru.

With a week having gone by after the last case was reported, the locals tentatively believe that the outbreak has been contained. Experts substantiate it with facts. Says S.K. Sharma: "The very fact that almost all the cases have been confined to one family proves that the threat has been adequately contained. The incubation period for the bacteria is over and the bacteria must have been attenuated by prophylactic use of antibiotics in carriers.Had this not been the case, we would have got several fresh cases by now." He adds that plague is no longer a mass-death-causing epidemic as it can be treated with the available antibiotics.

Gradually, calm is returning to Rohru. But with patients still undergoing treatment at the quarantined ward of the local hospital, it'll be some time before tranquillity returns to the apple orchards. For the time being, antibiotics have taken care of the scare.

Break Up Of The Writing Instruments Market