Death By An Inch... Lies By The Mile

Will Azad become Congress’s Sohrabuddin? His post-mortem suggests he was killed in cold blood. 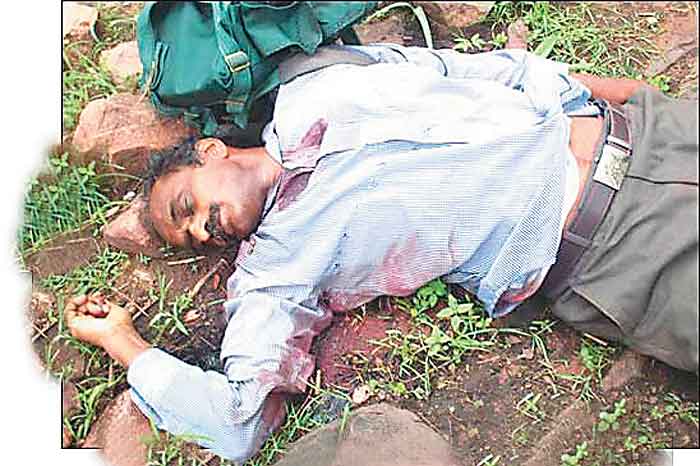 Dead men tell no tales. But when the deceased is Chemkuri Azad Rajkumar, the manner of death can speak volumes. The Maoist leader’s post-mortem report, which Outlook has now accessed, categorically establishes that he died in a fake encounter. Read along with the FIR and inquest reports, it exposes the elaborate set of lies drawn by the Andhra Pradesh police to explain his death. The claimed encounter, a much-touted “gain” in the UPA government’s war against India’s “gravest internal security threat”, was in fact a cold-blooded execution by the state. Azad, a key player in the planned negotiations with the government, was picked up and shot with a handgun from a distance barely more than the size of an outstretched palm. The official version, that the Maoists were atop a hill and fired at the police party and Azad died when the cops retaliated from down below, just doesn’t add up.

The post-mortem on Azad’s body, conducted by doctors at the Adilabad district hospital on July 3, two days after the killing, records a 1-cm oval-shaped wound just a few inches above the left nipple where the bullet entered, tore through his heart and exited from the back just between the ninth and the tenth vertebrae. The wound’s entry point, the doctor conducting the post-mortem records, had “darkening (and) burned edge” at the “left second intercostal space (the space between two ribs)”.

In forensic medicine, which also deals with decoding fatal bullet wounds, the words “darkening, blackening and burning” are revealing. Experts with hundreds of autopsies behind them all say that when there is “burning” associated with a “darkening or blackening” of an entry wound, it can only mean that the victim has been shot from a distance less than 7.5 cm or less—practically point-blank range.

Outlook invited three experts to analyse Azad’s post-mortem report, without revealing his
identity. All three say Azad was shot from a distance equal to, or less than 7.5 cm

“If there is darkening, blackening and burning around a bullet entry wound, it is caused by the flame, smoke and gunpowder emerging from the firearm. The flame and the gunpowder, due to low mass, cannot travel very far. These residual marks, therefore, strongly suggest a near shot.” —Dr Sudhir Gupta, Associate Professor of Forensic Medicine & Toxicology at AIIMS, New Delhi. Has conducted nearly 30 autopsies of police encounter deaths.

“While the report mentions burning, there is no tattooing. But if the deceased was wearing a shirt, then the tattooing could be on the shirt and only the burning is visible. The presence of burning in an entry wound accompanied by tattooing clearly indicates a shot fired from less than 7.5 cm.” —Dr B. Umadethan, Former head of the department of forensic medicine, and police surgeon, Thiruvananthapuram Medical College. Author, Principles and Practice of Forensic Medicine.

To get a better interpretation and assessment of the observations in the post-mortem report, Outlook gave a copy of it to three of the country’s top forensic medicine and wound ballistic experts in three different cities. To ensure an unbiased and objective assessment, only the contents of the report were made available to them, the victim’s name was not revealed. All three agreed that the probability of a close-range shot, perhaps even less than 7.5 cm, was very, very high.

Dr Sudhir Gupta, a gold medallist in medicine and currently an associate professor of forensic medicine and toxicology at the All India Institute of Medical Sciences in New Delhi, is considered an authority in his field. He is also an expert on encounter deaths, having handled 30 such cases. After going through the Azad post-mortem, Gupta summarised that a very “near shot” had killed the victim. 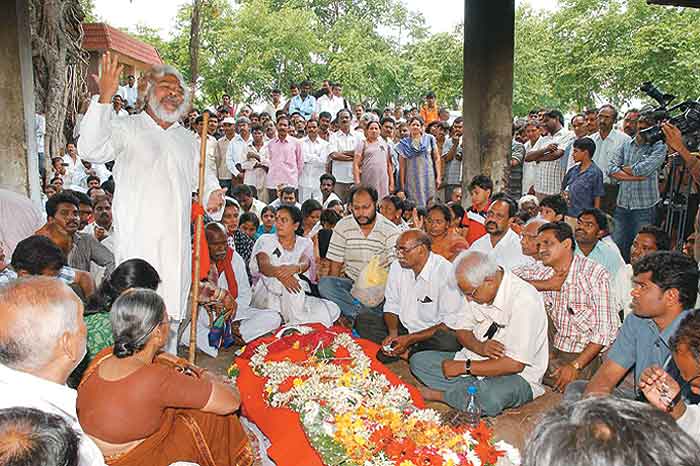 “No way can firing from below go down a person’s chest and exit like that,” says Azad’s doctor brother.

He explains: “When there is darkening, blackening and burning around a firearm bullet entry wound, then it is caused by the flame and smoke of gunpowder emerging from the gun. These residual marks strongly suggest a near (close-range) shot. The burning is caused by a flame that has no mass. So, it travels a very short distance from the gun and therefore can only cause a burn if the shot is fired from close range. The gunpowder residue which hits the body at near range penetrates the skin and causes the darkening. Please note that the flame and the gunpowder, due to low mass, cannot travel very large distances.” However, exercising the customary caution of a professional, Gupta advocates “test-firing of the gun with the type of ammunition that was used in the original shooting for an accurate assessment of the range of fire”.

The second expert Outlook approached is a name students of forensic medicine are all too familiar with. Dr B. Umadethan is the former head of the department of forensic medicine and a police surgeon at the Medical College of Thiruvananthapuram. His book, Principles and Practice of Forensic Medicine, is a standard text for forensic students. A cautious man, Umadethan makes it very clear that it is difficult and even dangerous to form an opinion from the available data. But he finds the “darkening and burned edges” intriguing. “Usually, a very close-range shot, less than 7.5 cm, leaves behind three telltale marks: the entry wound is burnt; it has a halo tattoo from the unburned gunpowder and blackening created by the smoke. If the deceased is wearing a cotton shirt, then the gunpowder tattoo can be left behind on the cloth. But a burn along with these other indications definitely indicates a very close-range shot.”

“If they kill the very man sent to talk with the Maoist leadership, who do we talk with?” asks Swami Agnivesh.

A third expert who comes with formidable qualifications requested anonymity. A former director of the Central Forensic Sciences Laboratory in Chandigarh, he is an expert on wound ballistics and has authored several books on the subject. “The darkening of the wound’s edge could be due to dirt and deposit of power residues and contusion, but when accompanied by burnt edges, it’s almost certain that the bullet was fired at extremely close range and the weapon used was a handgun, not a rifle like the AK-47. It causes a wound of almost similar dimension but inflicts much more damage to the tissue. My guess is that the bullet was fired from a .38” (9 mm) pistol,” he says.

If the post-mortem report exposes the police claims, then the FIR, lodged on a complaint filed by Circle Inspector Raghunandan Rao on July 2, is an even greater exercise in self-contradiction. It states that the police received a tip-off from the state intelligence police about a 20-25-strong Maoist squad infiltrating into the Wankedi forests from the Maharashtra side. Rao’s team, equipped with night vision devices, found the squad in the midst of hundreds of acres of forests in the dead of the night on July 1. The police claim they challenged the squad, but came under intense fire. The cops too retaliated; the exchange of fire lasted 30 minutes. When the firing stopped, Rao led his team towards the hilltop to halt and rest for the night. Early next day, he resumed his search and stumbled upon two unidentified bodies, each with their individual kit bags, an AK-47 and a 9-mm pistol. One body was Azad’s; the other victim was a freelance journalist, Hemchandra Pandey. 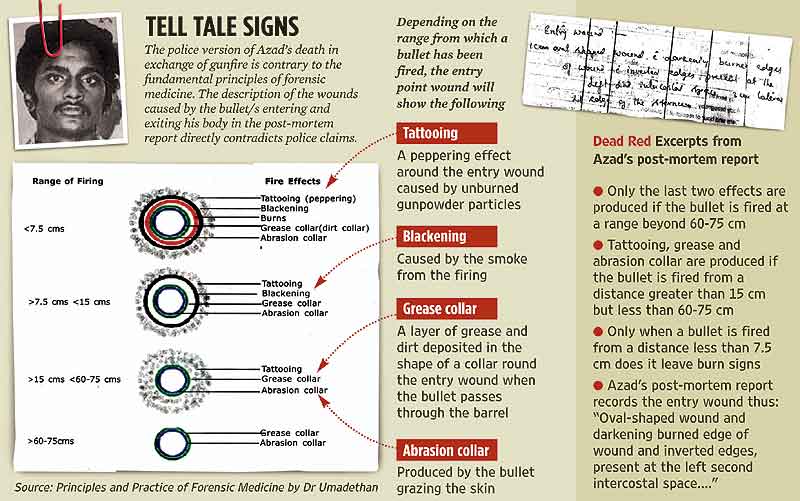 Not only do the first series of contradictions emerge here (see Holes in the Dark), the FIR and inquest report are unable to answer two more key questions:

Swami Agnivesh, who had been asked by Union home minister P. Chidambaram to initiate talks with the Maoists in search for peace, is a perplexed man. “If they kill the very man who was carrying my message to the Maoist leadership in Dandakaranya to begin talks and offer a substantive gesture to show their sincerity, then who do we talk with? Are we keen to end this conflict or are we getting ready for a perpetual war in the heartland of India? When such disturbing facts emerge from the death of such a man, doesn’t it merit a decent inquiry?” For a nation at war with itself, the truth is the least it owes itself.

Else, Azad will become the Congress’s Sohrabuddin. Like their counterparts in Gujarat (who did not budge till the Supreme Court stepped in), the Centre and the state are in denial about Azad and attempting to bury uncomfortable facts. Like in the Sohrabuddin encounter, there is trickery involved in Azad’s death too. The Maoist ideologue, from all credible accounts, had been drawn out for peace talks. Only, instead of allowing him to speak, the government silenced him forever.