The ISI, primed for jehad, is too subversive for Pakistan itself. Time for a total rethink. 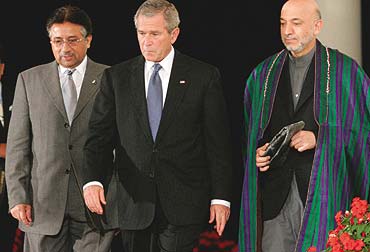 The world accepted this logic. Or, it ignored the ISI's chicanery, confined as the problem was to the subcontinent.

This perception is changing now, considering the fusillade of charges from around the world against the ISI in the last few weeks. Forget New Delhi's claims about the ISI masterminding the Mumbai bomb blasts; that's old hat. What should worry the ISI is Afghan President Hamid Karzai's accusation that it is bolstering the Taliban and providing sanctuary to Osama bin Laden and Mullah Omar. Add to this the demand of NATO commanders from five nations operating in Afghanistan that their governments get tough with Pakistan over the ISI's support for the Taliban.