Days And Nights Of The Locusts

The passions, hopes and betrayals of a tortured land is reopened in its raw luridness 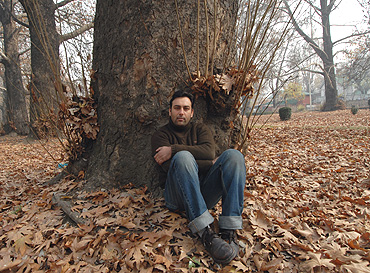 Curfewed Night
By Basharat Peer
Random House Pages: 256; Rs. 395
In his remarkable debut about growing up in Kashmir, Basharat Peer mixes a mosaic of memories with reportage and history to present an intimate and gut-wrenching account of one of the most tragic conflicts of our time. It is an insider’s view on what it was like to grow up in the shadow of an occupying army pitted against a violent separatist movement.

Born in rural Anantnag, not far from the Pakistan border, Peer was barely twelve when his carefree childhood was irrevocably changed by the separatist movement which exploded in Kashmir in 1989. The son of a bureaucrat in the state civil service and the grandson of the village’s stern headmaster, the shy, bookish boy feasted on Kipling, Dickens and Shakespeare, and the occasional movie.

Before long, the young boys in Peer’s tiny village of Seer were adding words like crackdowns, arrests, torture and Kalashnikovs to their vocabulary. Like hundreds of other boys his age, a cousin crossed the border to camps in Muzaffarabad to receive guerilla training. Cries of "azadi" rent the air as Kashmiri civilians were caught in the crossfire between militants and the Indian army.

Peer narrowly escaped crossing the border himself. Unable to step over the headscarf his mother placed at his feet, Peer quickly abandoned the boyish dream of becoming a jehadi. As trouble spiralled, Peer—like so many boys whose parents could afford it—was packed off to Aligarh in 1993 to complete his education.

Even though he faced the brunt of post-Babri Masjid communal tensions, Peer discovered a sense of freedom here—a far cry from his image of India as an occupying brute force. Not daunted by the discrimination against Kashmiri youth, who found it impossible to rent a place without raising suspicions, Peer began exploring the "various Indias that existed, Indias that I liked and cared about". He also heard about the Hindu right-wing militants, wielding their "saffron-painted crowbars and daggers". But Kashmir, where the violence continued to rage, was never far away.

As a reporter for Rediff and Tehelka, Peer took every opportunity to return to the Valley to tell the story that affected him most. His parents were nearly killed by a landmine set for their car by militants as they returned from a wedding. Like many other attacks in Kashmir, it turned out to be a case of personal vendetta against his upright father. The incident shook Peer to the core, and he yearned to return home to give voice to "the fear, the tension, the anger and hopelessness" of his people. Resigning from his job and armed with a load of books, he boarded a bus to Kashmir in 2003.

Things had changed since the 1990s, but a low-intensity war continued. Kashmir’s Sufi tradition and long history of religious tolerance had largely been replaced by a more orthodox Islam. The second half of the book is a painstaking reconstruction of the 1990s as seen through the eyes of people who suffered the most during those years. Peer’s descriptions of the Kashmir of his childhood are lyrical, and he tries hard to inject some of the lightheartedness of the first pages into the rest of the story.

But that is no easy task—there is nothing lighthearted about the bride who was raped on her wedding night, the countless women who lost their sons, the mother who set up the ‘Association of the Parents of the Disappeared’ after her son didn’t return, the mercenary militant, the man who could not come to terms with his impotency after being permanently scarred in an interrogation centre, and the so-called political leaders who were willing to sell out to both India and Pakistan for personal gain.

If there is any criticism possible of this beautifully-written and heartbreakingly sincere first book, it is that Peer is too kind to some known devils who strove to further their personal goals as the rest of Kashmir bled. He even manages to find good words for some members of the occupying army that has raped and humiliated women, burnt down entire villages and medieval shrines and killed thousands of young boys like him.

For those acquainted with Kashmir, the book is a hard-hitting reminder of the heavy price ordinary citizens pay for a political problem that continues to fester and which remains the United Nations’ longest-standing dispute. Curfewed Night might prove a tougher read for those not familiar with the subject, and even harder for those not willing to acknowledge India’s role in the deep alienation of Kashmiris. They can rest assured; this is no work of fiction.

A Book Of Life Through The Cracking Glass