Burma sees a whole future through a tiny window of freedom 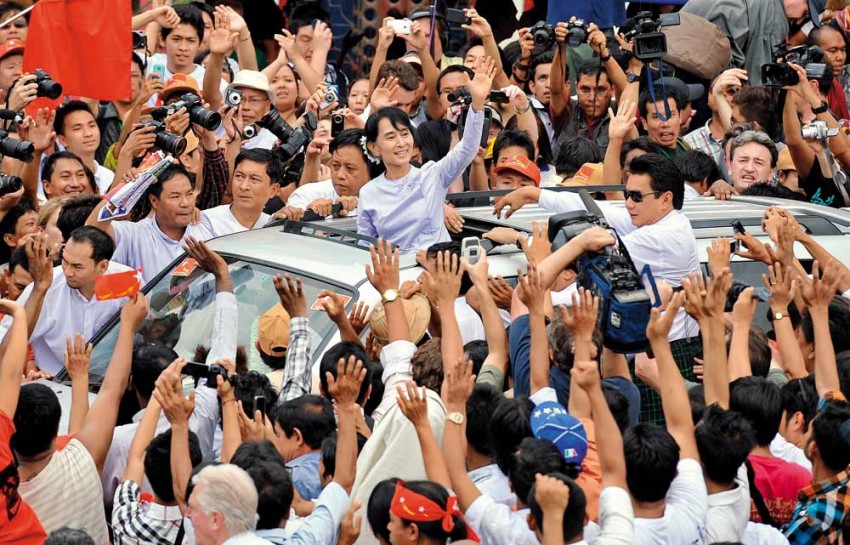 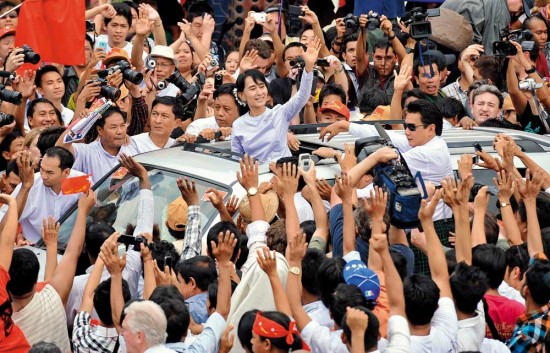 The taxis of Yangon, mostly Toyota Corollas and Camrys from the early ’90s, look much older. Steering wheels have an oily patina from overuse, windows are missing, door handles stick, wires hang from dashboards, and the leather seats are cracked yellow like overripe melons.

But there’s change on the street. The opening up of car imports has meant that the Chinese Chery QQ3 Mini and its locally assembled version—the Myanmar Mini—are now plying as taxis. The moneyed drive reconditioned Japanese cars.

Taxi stereos belt out ‘Mother Suu is coming back’, sung by exiled Burmese singer Lashio Thein Aung. Recorded in the US to mark Suu Kyi’s release, the song has taken the country by storm. Amidst the heat and pollution of Yangon’s streets, the palpable feeling is that with the National League for Democracy (NLD) entering Parliament, the country is on the threshold of democracy.

The NLD’s sweep—winning 43 of the 44 seats it contested—shows which way the wind is blowing. The party took all four seats in brand new capital Naypyidaw, populated largely by pro-government bureaucrats and army personnel, and all six seats in Yangon. Despite the transition being tightly calibrated by the army, people in Myanmar believe that this time around, the change will be irreversible. Ma Phyu Phyu Thin, the victorious NLD candidate from Yangon’s Mingalar Taung Nyunt township, is a trained nurse who runs an HIV/AIDS prevention and care centre. Sitting on the floor of her home-cum-campaign office, she says, “I think the government is serious about democracy this time. The world over, dictatorships are going, so in Myanmar too you see a change.”

The recognition that its insular policies were no longer working impelled the army to initiate political and economic reforms. The current president, Thein Sein, was selected after Gen Than Shwe, the military dictator who ruled Myanmar from 1992 to 2011, sidelined hardline contenders. Despite his cardiac issues, he was tasked with overseeing a carefully-orchestrated democratic transition. 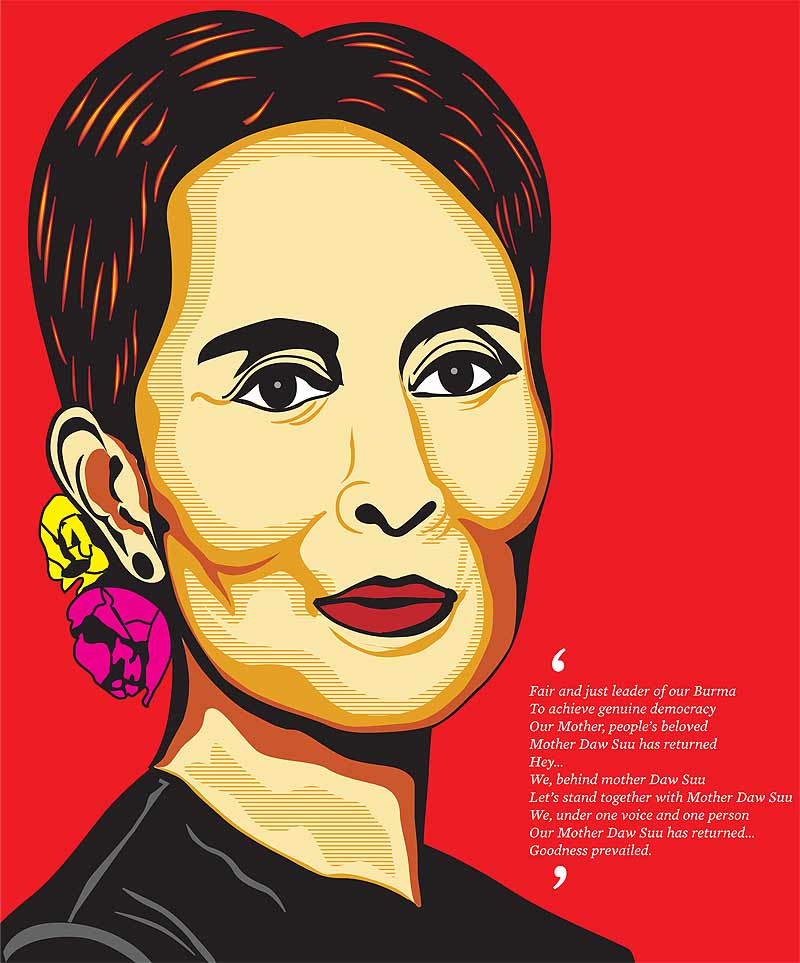 There was also the strong desire to be accepted once again by the international community. Sensing this, ASEAN leaders played a crucial role in pushing Myanmar towards democratic reforms. In fact, Myanmar’s commitment to reforms began with its joining ASEAN in 1997. The country is hosting the 27th Southeast Asian Games in 2013 in capital Naypyidaw. It is also set to take over the ASEAN chairmanship in 2014. A year later, the ASEAN Free Trade Agreement comes into force—by which time Myanmar’s financial systems and banking practices will have to catch up with those of its developed neighbours. As a Yangon-based diplomat explains, “This government would not like to do anything that would upset the ASEAN processes. Its desire to be part of the international mainstream is the primary motivation for the changes.”

International sanctions imposed in 2003 had taken a toll on some sectors of the economy; the garment sector, for instance, suffered a big blow as 300 out of 500 factories shut down. Foreign banks did not want to trade with Myanmar, and the big US and European companies pulled out of the country.

Besides, the army top brass and their cronies who became super-rich working the levers of politics and business now want to enjoy their wealth. “They could not travel to the West for tourism, education or even for accessing health services,” says a political commentator. “If sanctions are removed, they can do all this. They’ll also have an advantage over others when the economy opens up.”

Some wonder about NLD. “Daw Suu is not the entire party.” Its leadership too is ageing, Suu Kyi herself 65.

However, the Myanmar army wants to control the pace of the democratic transition. The process began in earnest with the writing of the 2008 Constitution, followed by the 2010 general election, boycotted by NLD. The government which took over has close links with the army. The ruling Union Solidarity and Development Party (USDP), essentially a party of demobbed army officers, won about 70 per cent of the seats that were up for election in the two Houses of Parliament in 2010. Add the 25 per cent nominated seats reserved in both houses for the army’s serving officers, and you have 90 per cent MPs willing to do the army’s bidding. Of the 32 cabinet ministers, only seven or eight are civilians.

The army thus controls both the legislature and the executive; it also appoints the judiciary. So it’s a confident Myanmar military leadership and not one in retreat which has initiated the move towards what it calls “disciplined democracy”.

This calibrated transition to democracy has also provided the West with an opening. The US and European Union realised that sanctions had not led to a regime change; and the downside was that they had left the field open to China, which was fast converting Myanmar into a captive resource hinterland. Having Suu Kyi in Parliament would allow the West to lift sanctions and retrieve lost ground.

On their part, Suu Kyi and her NLD decided to participate in the political process because they realised that the government was indeed moving towards democratisation—Suu Kyi herself was released from house arrest, hundreds of political prisoners freed and political exiles allowed to return. After the August 19, 2011, meeting between Suu Kyi and President Thein Sein, the restrictions on party registration were also lifted and the NLD decided to contest the byelections.

Before quitting and appointing Thein Sein, General Than Shwe had also retired the entire top leadership of the army up to the level of two-star generals—ensuring that those who had enjoyed absolute power for years no longer remained. Today, there is a new crop of army brass—all under 55. The army nominees to Parliament are relatively junior officers—captains and majors. They seldom speak out, and vote as they are told.

However, the army’s seeming commitment to democracy does come with a rider. It has emergency powers to take over government under the Constitution, which can be invoked if something unexpected happens. “There could still be a U-turn,” warns U Ohn Kyaing, NLD spokesman and winning candidate from Mandalay’s Maharangmyae township.

Besides, NLD’s influence is likely to be limited despite its victory. The legislative power would remain with the combined team of USDP and the army-nominated MPs. It would be difficult for the NLD to change the Constitution as more than 75 per cent of the MPs have to vote for an amendment. The 25 per cent seats reserved for the army will stay till 2015, when the NLD hopes to win a majority.

Says a young Burmese journalist, “After 50 years of dictatorship, even Laos and Vietnam have surged ahead.”

However, Suu Kyi is immensely popular in the country and what she says in Parliament would have significance far beyond the numbers she commands. She might be able to achieve some changes by mobilising the support of the ethnic parties. “Maybe our voice will be small in Parliament,” says Kyaing, “but we’ll work for the rule of law and establishing internal peace in the country by continuing the ceasefire with ethnic groups and engaging them in political negotiations. We will try and redraft the Constitution. This won’t be easy but we’ll try to get the support of non-NLD MPs.”

There are some worries, though, about the state of the NLD itself. A veteran Burmese political commentator says, “Daw Suu is not the entire party. My fear is that a lot of them do not have the requisite capacity to govern.” An ageing leadership is another issue, with Suu Kyi herself pushing 66 years and other top leaders mostly in their 70s and 80s.

Political reform apart, the pace of economic reform has been relatively slow. The government began by selling some assets in public sector units; the retail distribution of petrol was partly privatised; and import of palm oil and of new and reconditioned cars was opened up. The term for leasing land by foreigners has been extended from a year to 30, with two further extensions of 15 years each. Licensing processes for exports/ imports have been streamlined. The government is planning tax incentives for foreign companies, and opening the oil, gas and telecom sectors to private players.

However, as a Burmese economist points out, “To engage with the world economy, we need to reform our fiscal and monetary policy, banking processes, have a unified forex rate and a clear investment law for foreigners.” The dual exchange rate (an official one of USD1=6.4 Kyat, and another, more prevalent one, of USD1=800 Kyat) creates problems not just for the unwary tourist but also for organisations like the IMF and World Bank, who can’t make sense of the Burmese economy. To address this, its parliament on March 27 passed the much-awaited Foreign Investment Amendment Bill. There is to be a controlled floating of the Kyat and a unified exchange rate. A modern stockmarket too is planned with aid from Japan’s Daiwa Securities.

Despite all this, there’s a distinct feeling in Myanmar that while the world’s moved on, they’ve missed the bus. Says Khin Maung Soe, a journalist in his mid-20s and an NLD supporter: “While some in the army may have reservations about losing power, most of us have realised that after 50 years of dictatorship, even Laos and Vietnam have surged ahead of us.” Dressed smartly in white shirt and blue-check lungi, Khin is fully kitted with laptop, two mobiles and a handycam. He takes spoken English classes for local students while pursuing an MBA and preparing for an internship in Thailand. Eager to see political and economic reform, his generation isn’t willing to wait forever to catch up with the rest of the world. Do those who rule Myanmar realise this?