Dam Up The Fury 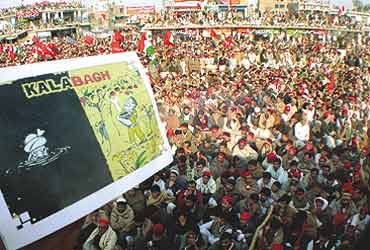 To be constructed on the Indus river in the Mianwali district of Punjab, the proposed 260-feet-high Kalabagh dam has stoked fears in the three other federating provinces that the hydro project could flood their lands, dislocate people and cause acute water shortages. And this time around, they are not willing to countenance Punjab's 'colonial' contempt for—and exploitation of—the three smaller provinces.

The popular anger against Punjab's domination has brought back those dark memories of 1971. As former prime minister Benazir Bhutto said in Dubai, "Presently, the military establishment is following the (dictum) that the rule of might is right.... Prior to this, another military dictator had treaded the same path: of imposing the minority will on the majority that finally led to the dismemberment of East Pakistan." Similarly, NWFP chief minister Akram Durrani said the Kalabagh dam "literally endangers the federation of Pakistan".