Tamil Nadu has almost perfected the admission procedure for engineering colleges. The system is so transparent and well-oiled that few other states can match it. 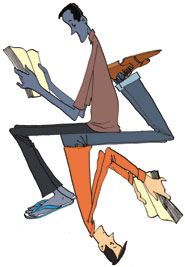 Every year in June Tamil Nadu works itself into a unique frenzy. Engineering college admissions become a state obsession, almost a summer sport. The newspapers are full of stories on the ever-increasing cut-offs, sundry TV channels try to predict the hottest courses and colleges, and almost all neighbourhood gossip is on the lines of who got a seat in which college. Despite having passed out last year, and having no vested interest in this year’s happenings, I had to listen to my mother rattling off the cut-offs and the prospects of every kid in our colony, and also the fate of cousins I did not even know existed. Still, there’s a sense of deja vu when I hear these stories. Five years back, I was part of this frenzy too. I think Tamil Nadu has almost perfected the admission procedure for engineering colleges. The system is so transparent and well-oiled that few other states can match it.

After the results for the statewide common entrance exams (TNPCEE) are out, the Department of Technical Education (DoTE) assigns a counselling date for each candidate depending on marks scored. Toppers and those within the same bandwidth of marks are called first and get to choose the colleges and courses they want. They fill up the government and government-aided colleges where course fee is as low as Rs 10,000 a year. As seats in the most preferred colleges and courses get filled, options for those who have scored less keep getting costlier. Students in the second rung and below have a choice of close to 300 private or self-financing colleges, with fees in the range of Rs 50,000-60,000.

There are counselling centres in major cities hooked up to the nodal centre at Anna University, Chennai. The system is quite similar to computerised railway reservations. At my centre at Anna University, anxious students and their parents sat under a huge makeshift coconut palm thatch-roof gawking at a giant screen which provided up-to-the-minute information on seats left in each engineering course in every college across the state. There would be a collective sigh of disappointment each time the giant screen showed that the seats in in-demand courses like IT or electronics and communication engineering (ECE) had been filled up.

It’s such a grand spectacle that it attracts hundreds of curious passersby, even parents of children who are still in Class X or XI. During the famed ‘single window’ counselling session, students are given provisional admission in a college which they choose. The students thereafter go to these colleges, pay the tuition fee fixed by the government (currently at Rs 49,000) and secure admission. Five years ago, I scored about 92 per cent in my board exams and had a "cut-off" of 235 out of 300, which enabled me to pursue ECE in an up-and-coming Chennai-based private college.

During my interaction with engineering graduates from other states, I find that our system is quite admired. But Anna University (to which all engineering colleges are affiliated) is still finding it difficult to ensure that infrastructure and facilities at the colleges conform to standards. The quality of education rendered too is often substandard. There is a shortage of good professors in areas like IT and communications where developments happen rapidly. Still, there’s a huge gap between industrial needs and student numbers. I often wondered whether the skills I had acquired would get me a job. For there’s absolutely no correlation between what I studied (ECE) in college and what I do (write codes) in TCS. The ongoing boom in IT and ITES firms is such that almost every engineering graduate is virtually guaranteed a job. But it hides the inadequacies of the technical education system in the state. There is still a long way to go if we want to compete with the IITs. Or maybe it’s time for engineering-obsessed states like TN to look beyond the BE and BTech as a career option.

(The writer is currently employed with Tata Consultancy Services)

Also see: The other side of reservation coin