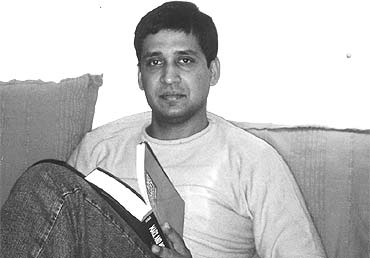 Tabish Khair’s Filming draws a unique connection between photography and barbed wire: both inventions, intended to freeze movement, were perfected in the year 1880. In many ways, the rest of the novel is the story—romantic, tragic, bloody—of how these two inventions played out in India. The story of how still images began to flicker on white screens in dusty villages and then started to move, then to talk and sing—first in black and white, then in scintillating, money-churning, record-breaking colour. And of how barbed wire was stretched across the subcontinent, to separate and to secure, and how its sharp points killed unsuspecting souls or left deep wounds in those who got past, their identities in shreds—wounds that continued to ache decades later, at the memory of a song, or a childhood caper, or a youthful love.

The story follows a young prostitute who runs away with one of her regular customers, the film-crazy postal clerk Harihar. Along with their young son, they bring the magical bioscope to village audiences, cranking out dreams for hungry imaginations. When they run into a young village landlord and reignite his subdued passion for the stage, an unholy deal is struck: the father, unknown to the mother, trades his child to the landlord’s family for resources to set up a film studio. The postal clerk becomes a film director, the prostitute becomes a studio manager—"a minor, insubstantial, ghostly figure in the glorious hard dream of Bombay films." Several new filmi characters—producers, scriptwriters, even Shetty and Helen(!)—walk into the narrative and we enter the world of pre-Bollywood Bombay. Khair evokes this lost world with a deft touch, skilfully using allusion and metaphor. One cannot help thinking of the kind of studio that was immortalised by Guru Dutt in Kaagaz Ke Phool, with its black-and-white intensity, the dust particles floating in the filtering light, the agony of underpaid scriptwriters, the loneliness of the director’s chair, the lilt of a melody sung on a moonlit night by a heroine with long tresses....

But ultimately, and despite the fact that it is structured in reels, not chapters, this is not a novel only about films. The politics of Partition looms large over the screen. Where dreams can enter, so can nightmares. The vicious cycle of communal violence, the frenzy of illogical hatred, the achievement of freedom with a savage cut across its body—all these contribute to the core of the novel. The material provided by Partition to fiction-writers has been explored in various ways. Khair approaches it from the viewpoint of those who left, in particular the Muslims who left India for Pakistan. His inspiration is clearly Saadat Hasan Manto, who left a moderately successful Bombay film scripting and radio career to die in Lahore a disappointed man. And there are those like ageing scriptwriter Rizwan Hussain ‘Batin’ who leaves India for Pakistan and then moves on to Denmark. When tracked down by the scholar-narrator, he says: "I did not choose to leave, I never chose to leave. I simply chose to live." But Manto’s question, in his five-page monologue, is haunting: "Will you be able to write if you start living?" Yet, it is true that the post-Partition generation of the subcontinent—Muslim, Hindu or Sikh—was all too aware of what people had to do to simply live. The changing of identities and the painful reconstruction of devastated lives was only one way of carrying on. To say more would be to give up the book’s suspense.

Khair’s poetic predilections often peep through his prose: "He understood, if vaguely, that life cannot be remembered as memory, for that will make it seem like death; life always survived as life. It was tenacious. It learned to crawl under the barbed wires of hate; it even managed to escape the loving embrace of still photos." Such restrained power of narrative is unfairly limited by the structural somersaults the author insists on making—Faulkner-like attempts at sentences several pages long, voices in italics, voices in bold italics, changes of point of view without warning. But the reader should dismiss this as a mere quibble; Filming is an assured and competent effort to tell a story whose strands "are entangled like the spools of a film slipping from its reel, like lengths of barbed wire".