Cut Ice With The ‘K’

Kashmir is a bellwether for Pakistan vis-a-vis India. It must be tackled for a way forward. 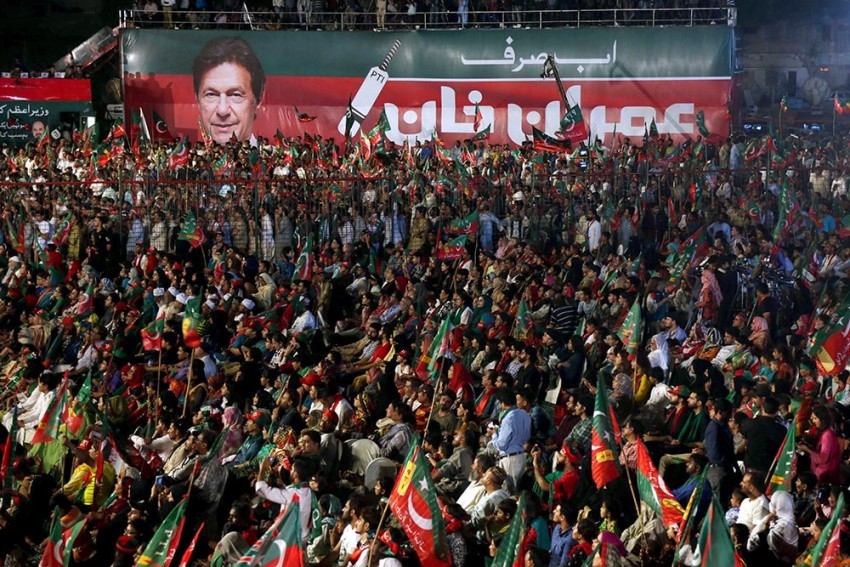 PTI supporters cheer the man who says he is ready to do business with India
Photograph by AP
Pranay Sharma August 02, 2018 00:00 IST Cut Ice With The ‘K’ 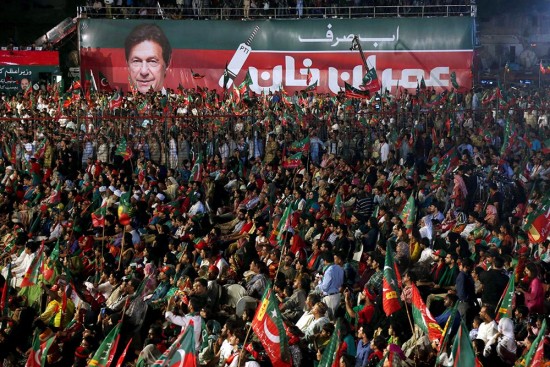 The first interaction between the two leaders was marked by obligatory civility. However, Nar­­e­ndra Modi’s congratulat­ory phone call to Imran Khan on July 30 seems to have led to a series of interpretations among policy planners in India and Pakistan.

Pragmatists see it as nothing more than a customary courtesy extended by the Indian prime minister to his soon-to-be Pakistani counterpart. Opt­imists, on the other hand, are enc­ouraged by the gesture, and read in it the first stirrings of a thaw in frozen bilateral relations.

Various events—untrammelled firing across the Line of Control, terror att­acks by Pakistan-based militants, the Kulbhushan Jadhav case and a Kashmir in turmoil—have cloaked India-Pak­istan ties in a prolonged phase of tension. The result is a lack of meaningful contact or attempts at engaging in a dia­logue to put relations back on track.

Imran promised two steps to India’s one towards normalising ties. But he said relations would only improve if Kashmir is resolved.

So, with a change in civilian leadership in Pakistan, one that enjoys the crucial backing of the all-powerful military est­­ablishment, are we looking at any mov­ement towards the talks-table?

Within hours of his Pakistan Tehreek-e-Insaf being declared the single largest party after the parliamentary elections, Imran had decided to reach out to India. But he stressed on the centrality of the ‘K’ issue in his overture. The chief claimant to the PM’s chair said he would like to match every step Delhi took towards normalising relations with two of his own. But he reminded that such imp­rovement could only be possible if the Kashmir issue, which sits at the core of bilateral relations, is resolved.

“Kashmir has been central to national identity in Pakistan since the outset,” says British historian and author Ian Talbot. He explains how ‘K’ stands for Kashmir in the nation’s name and how there is a deep sense in Pakistan that the two-nation theory—the very justification for its creation—was undermined by its exclusion. “Hence this is an existential as much as a case of territorial irredentism from the Pakistan state’s perspective,” he adds.

But if one goes by the prevailing mood in Pakistan, it is difficult to gauge why Kashmir becomes so important for its dealing with India. None of the major political parties—Imran’s PTI, Nawaz Sharif’s Pakistani Muslim League (N) or Bilawal Bhutto-Zardari’s Pakistan People’s Party (PPP) had made Kashmir the major plank in the polls. Nor were candidates of Hafiz Saeed-backed Allah-O- Akbar Tehreek or those from other parties that back militant groups perpetrating violence in the name of Kashmir shown any special preference by the electorate.

What then makes Imran put Kashmir at the centre of Pakistan’s relations with India?

“What the Indian audience must und­erstand is that, though Kashmir is nowh­ere an election issue, it has been made central to improving India-Pakistan relations,” says Pakistani str­a­tegic commentator Ayesha Siddiqa. “Without the Kashmir issue there is no India-Pakistan peace,” she adds.

According to Siddiqa, Imran spoke about peace, but meant that Pakistan would like to improve relations if India gave an impression of being inclined to solve the issue. “The ball is still in India’s court,” she feels. 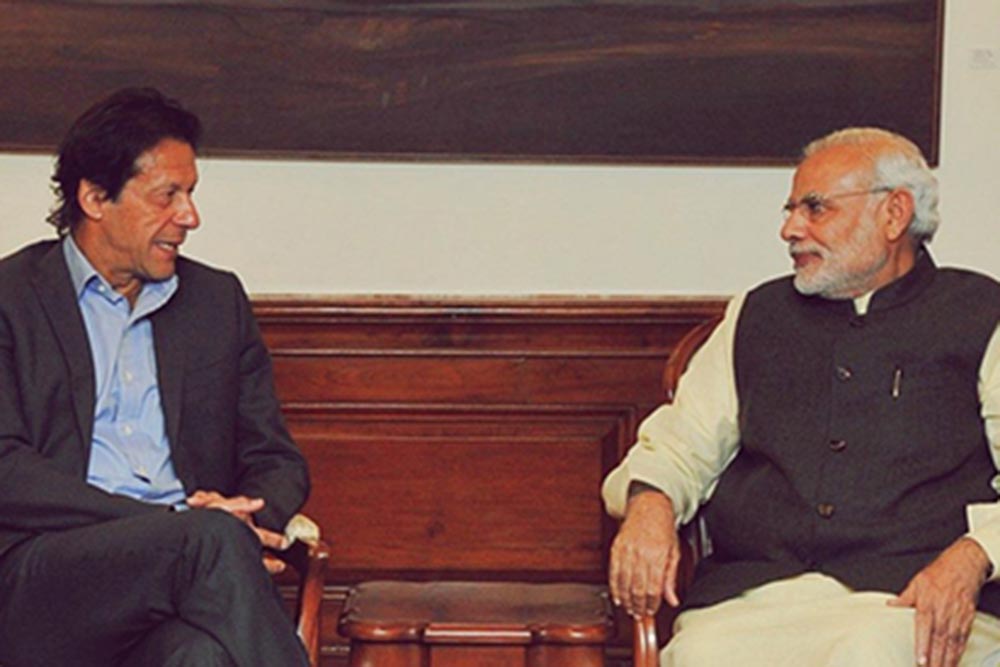 Imran is reportedly following Modi in inviting South Asian leaders to his swearing­-in ceremony. If that is so, will Modi visit Pakistan?

Many Indian observers, while acc­epting Kashmir’s importance to Pakistan, argue that it has to be seen beyond elections. “Elections in Pakistan, as in India, turn primarily on domestic issues. But Kashmir remains an important foreign policy issue in its own right,” points out historian Srinath Ragh­avan. He argues that considering Paki­stan’s enormous diplomatic, military and covert investment into the issue, there is no reason why it should cease to remain important in its foreign policy.

Some Pakistani commentators, such as pol­itical scientist Rifaat Hussain, see Kashmir’s relevance lying in its inclusion as an India-Pakistan dispute in the United Nations agenda. “Kashmir casts it shadow on every aspect of India-Pakistan disputes: water, Siachen, LoC ceasefire. Efforts to resolve Kashmir have to be part of a grand reconciliation bet­ween the two countries,” argues Hussain.

Yet, Kashmir’s centrality in Pakistan is seen by Indian policy planners as something that is nurtured as a favourite tool of the Pakistani military to deal with India.

“The J&K issue has become central in Pakistan’s thinking on India. It matters little if it is raised by the principal political parties or not during the election campaign,” say former MEA secretary Vivek Katju.

According to him, what is important is that the ideology of Pakistan, which the army safeguards, consists of anti-Indian rhetoric. One of the reasons to justify such sentiments is J&K. “Thus this issue is beyond elections,” Katju adds.

Political commentator Hamid Mir admits that the right wing always exp­loited the Kashmir issue in Pakistan, but holds India responsible for that. “The Modi government has helped the right wing by introducing pellet guns against agitators in the Valley,” points out Mir. The resistance in Kashmir, he says, is historically older than the Pakistan movement, pointing out how observing the martyrdom of those who were fighting against the Maharaja from 1931 began to unite large numbers of people and leaders. This, he says, was at least nine years before the Muslim League officially announced its support for the creation of Pakistan.

“It is not possible for any government in Pakistan to move forward without resolving Kashmir. Ayub Khan, Pervez Musharraf, Nawaz Sharif, all tried it but failed,” Mir adds.

Significantly, in India. too, there are sections who try to keep Kashmir as the central issue in their dealing with the difficult neighbour.

“India, of course, has its own Kash-mir lobby,” points out Talbot. “The commitm­ent to a secular view of the state drove Nehru’s stand in the post-Independence decade. Today, a Hindutva element provides ideological support to an unyielding response. So there are similar, alt­­­h­­ough less powerful, symbolic group interests and nat­i­onalist drives in India that keep Kashmir as central to relations with Pakistan,” adds the British historian.

According to him, there is wider public discourse in India, but the media, textbooks and popular culture all see the Kashmir dispute as not only a cause, but the symbol of fraught India-Pak­istan relations.

However, there is another interesting development at the international level regarding Pakistan that is likely to affect its involvement in Kashmir. This has to do with Pakistan being put on the ‘grey’ monitoring list by the Financial Action Task Force (FATF) for its close links with and financing of terrorist outfits.

“The grey listing of Pakistan may affect its image and its ability to effectively argue its views on Kashmir,” admits former Pakistani high com­­m­i­­ssioner to India, Ashraf Jehagir Qazi. “Ironically, for opposite reasons, the Azadi option is the one issue which India and Pakistan both oppose. India says Kashmir is part of India; Pakistan says the UN resolutions do not include a third Azadi option,” he adds. According to him, revival of the LoC understanding should address India’s concerns reg­arding militant infiltration to a great extent, while FATF will surely impact Pakistan’s policies. “But the viability of a people’s resistance, especially when it has the backing of its people, cannot be crushed out of existence,” says Qazi,

With dialogue frozen, only barrages of allegations—and live ammunition—being exchanged across the border, these are interesting times for India-Pakistan relations.

“Imran’s PTI has signalled its desire to work with India. Will this goodwill gesture get reciprocated by India? That is the key question,” says Rifaat Hussain.

There are speculations that for his swearing-in ceremony Imran could well follow what Narendra Modi had done in May 2014 and invite South Asian leaders to Islamabad.

If such an invite does come, will Modi go to Pakistan? In 2014, Nawaz Sharif sent a powerful message by his presence in New Delhi. It would take enormous political will—something that overrides the risks involved—for Modi to return the gesture.