Cut From A Different Cloth

11 other countries in Asia, Africa and Europe which attained independence around the same time as India... 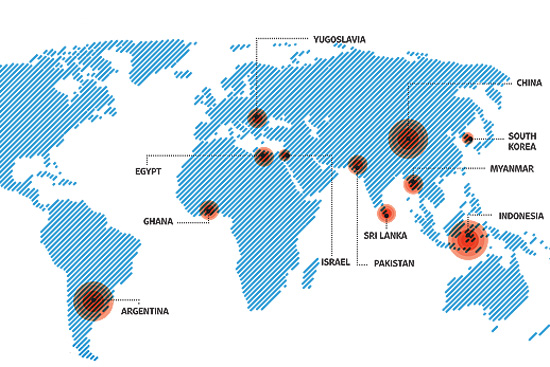 In post-liberalised India, Pandit Jawaharlal Nehru’s legacy has not merely been questioned but has often been the object of ridicule. A young, restless republic which has seen other Asian Tigers rise and roar has tended to view India’s first PM through the prism of economics. But Nehru’s impact goes beyond growth numbers. Pranay Sharma looks at 11 other countries in Asia, Africa and Europe which attained independence around the same time as India to see how they have evolved, not just as economic stories but as nations.

Gamal Abdel Nasser, a key member of the group that ended monarchy in his country in 1952 was also a founding member of NAM. As President of Egypt between 1956-70, he was responsible for a series of military misadventures, perpetuating autocratic rule, paving the way for military’s return to power and ruthlessly marginalising the opposition. Egypt still bears the marks.

Juan Peron, the most popular leader of Argentina in the late 1940s, brought about a series of policies to improve the lot of the poor and weaker sections in the country. But he could not prevent the country from plunging into political and economic instability, mass murders and military takeover by a series of generals.

Emerged as an independent nation in August 1947 from the partition of the subcontinent. Despite starting from a weak economic and social base and occasional wars with Pakistan, it has remained a vibrant, pluralistic democracy mainly due to the base provided by 17 years of Jawaharlal Nehru’s prime ministership in its formative period.

Kwame Nkrumah, founding NAM member, was leader of the Gold Coast and Ghana between 1951-66, playing a crucial role in the country’s independence struggle and the cause for  pan-African unity. The self-proclaimed ‘Lenin of Africa’ actively encouraged policies to perpetuate a ‘personality cult,’ and culture of corruption and autocratic measures to keep him in power for long years.

Mao Zedong’s ‘red army’ successfully defeated the nationalists of Generalissimo Chiang Kai-shek to establish the People’s Republic in October 1949. Though hailed as a leading Communist ideologue of the 20th century, the spectacularly ill-conceived ‘Great Leap Forward’ and ‘Cultural Revolution’ led to the death of millions of Communist party members and citizens.

Emerged as a republic in 1948 after the Korean peninsula was formally divided into North and South. Led by Syngman Rhee (till 1960) and backed by the US, it fought the first Cold War conflict, with USSR supporting North Korea. Its economic boom was also marked by political assassination, spells of army rule and suppression of opponents.

Sukarno led his country to independence in December 1949 and became its first president. A founding member of NAM, he had an international standing but by resorting to a series of autocratic policies to stay in power, he laid the way for prolonged phases of  social upheaval, political coup and military rule in the country.

Josip Broz Tito, founding member and the first general-secretary of NAM, was the supreme leader of his country in 1953-80. He headed its economic boom, but isolated nationalists and political opponents. The subsequent break-up of the country and bloody ethnic clashes in its wake can be traced back to many of his policies.

Though it came into existence with the partition of the Indian subcontinent in August 1947, the country miserably failed to live up to Mohammed Ali Jinnah’s explicitly stated dream to become a vibrant, secular republic. Long phases of military rule, rampant corruption and the spread of Islamic fundamentalist ideology within continue to destabilise the country even after years of its birth.

The island nation got independence from Britain in 1948 and changed its name from Ceylon to Sri Lanka only in 1972. Despite being led by moderate leaders like S.W.R.D. Bandarnaike (1956-59), successive Sinhala-dominated governments pursued policies to marginalise the Tamil minority. This gave birth to a prolonged, bloody ethnic war that killed lakhs, crippled the economy and destabilised the country for long.

Initially called Burma before changing its name to Myanmar, it emerged as an independent, democratic nation in 1948 led by Gen Aung San. But long spells of army rule led inevitably to corruption, stunted development and suppression of political opponents. It has prevented Myanmar from joining its Asian peers. It also has one of the longest, unresolved ethnic conflicts in South Asia involving the Rohingyas.

Emerged as a modern, democratic republic in May 1948 under David Ben-Gurion’s leadership but has been involved in a series of wars with its Arab neighbours ever since. Its hardline policy against the Palestinians, backed by regular military campaigns, has led its West Asian neighbours to shun it and see it as a regional bully.