A scam-soaked Customs chief lands in the CBI net, and the trail of benefactors could lead to many blushes at the top 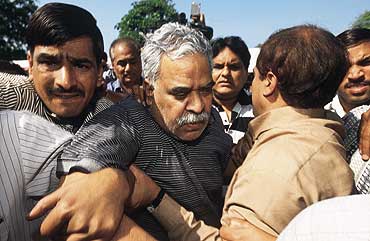 When sleuths of the Central Bureau of Investigation (CBI) swooped down on Central Board of Excise and Customs (cbec) chairman B.P. Verma's house in south Delhi's Andrews Ganj residential complex on the night of April 1, he did not know what had hit him. Verma, along with his son, Siddarth, were having a nightcap when nemesis knocked on the door. Verma was charged with receiving bribes for favours and amassing wealth way beyond his known sources of income, and his son for aiding his father in illegal transactions.

Verma was completely confounded by his arrest. For a man who was part of a well-oiled network of powerful bureaucrats, politicians and influential individuals in business houses, one that provided him unflinching patronage over the years, the arrest was a bolt from the blue. All along, he believed he was untouchable and liked to boast of his high-flying connections. "It suddenly sunk in that his lan (local area network) had come crashing," joked a CBI official.

Why the establishment suddenly decided to go after Verma, especially when he had enjoyed a seemingly unstoppable run for years in spite of the welter of controversies surrounding his rise, is still unclear. Verma had amassed huge amounts of money and property (see graphic) and had helped others too corner wealth discreetly. "We know he was overstretching himself trying to extract more favours from business houses, as he had just a few more months before retirement," says a finance ministry official, who suspects that one of the business houses may have turned against him and worked towards Verma's downfall.

It was the telephonic conversations, taped by the CBI, between Verma and Chennai-based exporter Vijay Pratap, acting as a middleman for A.K. Enterprises, that formed the core of the case against the former CBECchief. By tapping the mobile phone of Verma's "friend" (Bhavana Pandey), which he was using, the CBI got sure proof that he was part of dubious business deals. For instance, Verma had told Pratap that Siddarth would collect Rs 2 crore from a five-star hotel in the capital. In return, Verma promised to help clear an export consignment of A.K. Enterprises which had been seized by the customs in Chennai. The consignment contained rags instead of the declared item—garments. This had been done to falsely avail of duty drawbacks, a concession under an incentive scheme for exporters.

However, Outlook's investigations show that the telephonic surveillance the CBI maintained on Verma over several months reveals much, much more. And the A.K. Enterprises case is just the tip of the iceberg, say investigators. "If pursued thoroughly, this can of worms can humiliate top bjp politicians, government officials and some leading industrial houses," claims a senior Intelligence Bureau (IB) official. The coded references in the tapes show that a powerful conglomerate of industrialists, politicians and customs officials were defrauding the government of crores of rupees by misusing the duty drawback scheme. In one instance in the taped conversations, Verma is learnt to have talked at length to the representative of a business house with the intention of providing fake certificates for exaggerated exports figures.

Inflating exports is one route through which business houses can convert black money parked abroad into white or legitimate money. Typically, rags or pulses are exported. But the declaration provided would state that the items were garments or machine tools.The buyer abroad is in most cases a benami or front company owned by the business house. The black money is sent back as payment for the duty-waived "export".

The CBI has now widened its scope of investigation to discover the "beneficiaries" of the scheme, which empowers customs officials to waive duty on certain items of export. "To a large extent, Verma's elevation to the top post in the customs department can be attributed to the clout wielded by this mighty group," says a revenue department official.

The customs department gives over Rs 1.5 lakh crore revenue annually to the government. The CBI hopes to find out in how many cases Verma had pressurised his customs officials to use their "discretionary powers" with regard to the duty drawbacks. Other investigative agencies have also been roped in to determine Verma's foreign deals and connections.

Verma's arrest has inevitably focused attention on how he rose so swiftly from the post of member (excise) to occupy the chairman's slot of the cbec. What is more revealing are the actions of those who assisted him to clinch the job. Shortly before the then revenue secretary, N.K. Singh, was transferred to the Prime Minister's Office (PMO) in 1998, Verma was made member (budget), a crucial post in the board where rates of duties for industry are decided. "At that time, there was a move to bring in M.K. Bhada, customs commissioner based in Rajkot (covering Jamnagar), as joint secretary of the Tax Research Unit. And remember, Bhada and Verma are very good friends," says a senior revenue official. All finance ministry officials agree that this post is the nerve-centre for deciding customs and excise duties on individual items.

A senior official in the finance ministry told Outlook: "There was massive pressure mounted even on finance minister Yashwant Sinha to clear the decks for Bhada's appointment." Here, again, there is talk of one particular business house. However, when Javed Chaudhary took over as revenue secretary from N.K. Singh, Bhada's name was rejected.

The CBI suspects that Verma was passing on vital information to business houses for a consideration during his tenure as member (budget). For instance, details of duty structures were passed on even while the Union budget was being formulated.

How Verma moved out of the CBECin September 1999 to be promoted as special secretary and DG of the Central Economic Intelligence Bureau only to be brought back as chairman, eight months later, is another intriguing story. Even when questions were being raised about his integrity—through a warning from the Central Vigilance Commissioner, N. Vittal, in February 1999—the crucial post of CBECchairman fell vacant. The then chairman, S.D. Mohile, had retired and it was the norm that the seniormost member be appointed as chairman.

At that time, A.M. Prasad, member (prevention and vigilance), was a strong contender for the top post. The department of revenue had not even forwarded Verma's name for consideration to the selection committee, comprising the revenue, personnel and cabinet secretaries. The practice was to forward only the names of sitting members.

But in spite of the adverse remarks made by Vittal—who specifically telephoned the then finance secretary, Piyush Mankad, not to consider Verma—and despite the fact that his name had not been put forward by the revenue department, the selection committee chose Verma for the job. "Surprisingly, a senior PMO official sat in on the selection.This was unprecedented," says a finance ministry official.

Though Prasad went to the Delhi High Court claiming the CBECtop slot was his, citing the adverse remarks against Verma as proof that the government had mala fide intentions, he was later forced to withdraw his petition when he found he could not afford the litigation costs. He was later made member, appellate tribunal for forfeited property.

As CBECchairman, Verma grew from strength to strength. Through son Siddarth and business associate Rohit Jain, Verma invested in private companies. Siddarth had been reportedly running four companies, all fronts for his father's illegal transactions. The companies linked to Siddarth include Jubilee Investment and Jubilee Medicare, the premises of which were searched by CBI teams.

What has come to light from investigations is that in the course of his official visits to Mumbai, Verma is reported to have made private visits to the Dabhol power project. "We are investigating if he helped give duty concessions and also provided the jetty facilities free to Enron," says a CBI official.

Customs officials who worked in proximity with Verma told Outlook that in the 11 months that he was chairman, he played havoc with the powers at his disposal. "He had a weakness for women and wine and on most occasions, there were women who sat in the office and made full use of him," says a senior customs official. In fact, he often visited a house with his women friends in the capital's posh Gulmohar Park area, where one of his associates had a bar in his basement. One such liaison, which lasted for quite a period of time, was his relationship with Bhavana Pandey, who was also arrested by the CBI in the case.

Bhavana Pandey drives a Mitsubishi Lancer and is a key witness to many of Verma's activities. In custody, she is singing like a canary on her political and bureaucratic connections. The CBI is following up the leads thrown up by her to further bolster its case.

Along with Bhavana, Verma is reported to have accepted money for postings of at least a dozen customs officials. In fact, such was her hold over Verma that she even got the transfer orders sent to her one-bedroom house in Saket, south Delhi, so as to ensure that the transfers actually went through successfully. At one time a regular in Congress party circles, Bhavana shifted her loyalties and became well-known in the Samajwadi Party camp. "She told us that she had a good friendship with Samajwadi MP Santosh Kumar Singh," says a CBI official.

When Verma's "activities" became more brazen, sections of the finance ministry were embarrassed. In fact, Yashwant Sinha had got wind of Verma's dealings and kept him away from important meetings in the run-up to this year's budget. It is also believed that Sinha had written a letter to both prime minister Atal Behari Vajpayee and home minister L.K. Advani on March 1, asking for the summary removal of the CBECchairman. But action against Verma was delayed. "We could move only when we found a fit case which could stand up to judicial scrutiny," says a CBI official.

A joint probe by various investigating agencies is bound to throw up vital leads to the massive fraud that some officials in the customs department were perpetrating on behalf of business interests. According to a senior CBI official, the interrogation of Verma is also bringing to light the political patronage that corrupt officials enjoyed.But the trouble is, that very system of patronage raises a question mark over how far the investigating agencies will be given a free hand to clean up the mess.