Way back in May 1887, in the heyday of the Raj, Shimla's Gaiety Theatre opened with the play Time Will Tell. Who would have known then what time really had in store for this splendid building which became a prime hub of cultural and social activity. Twenty-five years after it was built, Gaiety Theatre, nestling on the Mall below Shimla's cedar-rimmed ridge, had become a crumbling edifice, and was destined for demolition. Its two top floors were lopped off as it struggled to retain some semblance of its former glory. But last week, a new act opened at Gaiety—one with a happy ending—with the completion of an ambitious and painstaking restoration project.

The restoration, which took five years, is the result of a rare mix of private effort and government support. It all began in the early '80s, though, when Jennifer Kendal Kapoor, who had performed several times at the Gaiety along with her parents' travelling theatre company, Shakespeariana, first took interest in its restoration. INTACH was roped in and Ved Segan, the Mumbai architect who built the new Prithvi Theatre, was sent to have a look. "It took us a good 15 years to decide whether something the British had condemned for demolition should be restored at all. But we have done it, and now it is up to those who run it to ensure it's used for the purpose for which it has been restored," Segan told Outlook. "Even though Jennifer is not alive to see it today, I am satisfied that I have kept my word to her," he added. Jennifer and Shashi Kapoor's daughter Sanjana visited the theatre after it was thrown open to the public in Shimla last week, and expressed keenness to develop an association between Prithvi and Gaiety. "The last time Laura and Jeffery Kendal (Jennifer's parents) performed here was in 1984, and though I was a child, I remember managing the backstage and sound for them. I have an emotional bond with this place and would like to link the two institutions by holding summer workshops for children here," she said. 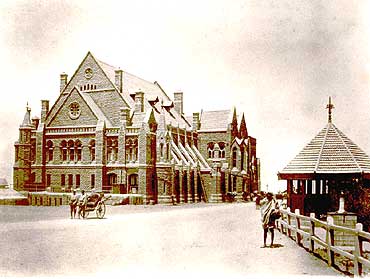 In the days of glory: Archival image of the Gaiety Theatre

The core of Gaiety all these years has been the Amateur Dramatics Club (ADC) which dates back to 1837. It was formed by a handful of British officers who produced, acted and directed plays in their spare time. Initially, the ADC functioned from various buildings in Shimla, but once the Gaiety Theatre building, which is actually a portion of the old Town Hall, came up, the ADC shifted here, paying an annual rent of Rs 3,000. The ADC passed into the hands of the army when the British left, and gradually became little more than a club for card games and dance nites.