As with some hearts, many shopwindows are also broken every year 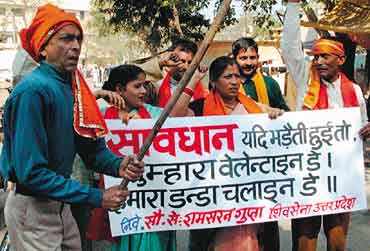 outlookindia.com
-0001-11-30T00:00:00+0553
That cash register jingle isn’t the only soundtrack to the Valentine’s Day show. There’s also the sound of breaking glass. In recent years, no lead-up to February 14 has been complete in India without angry men trashing greeting card shops. Violent and presumably cathartic as this activity may be, it is in general mated to the laudable cause of protecting India’s great cultural heritage from corrupting foreign influences on the youth.

Certainly, such influences can be both tawdry and pernicious. Mickey Mouse has after all colonised more minds worldwide than, say, the equally Western idea of Calvinist thrift and hard work.

Though objection to cultural invasion may span the ideological spectrum, Valentine’s Day violence has been largely a right-wing activity, with parties like the Shiv Sena and the vhp at the forefront. Last year several gift and card shops in towns like Mumbai and Kanpur were vandalised.

This year, wary shopkeepers knew they were being watched, which is why Shiv Sena MP Sanjay Nirupam was able to announce well before Feb 14 that Valentine’s Day would be "low key".

Rajesh Wahi, who owns a gift shop in Kanpur, has been careful this year not to draw attention to his shop with V-Day promotional banners. His customers came regardless: "Most youngsters know about Valentine’s and the students in the nearby colleges know about my stock of cards," he says.

Not every student is impressed. Sipu Thakur is a law student at Brahmanand Degree College and is a member of Shiv Sena’s Hindu Manch, "We’ll stop restaurants, card shops and florists from selling on Valentine’s Day," he says.

Many self-proclaimed cultural guardians are little more than ambitious demagogues. But it would be simplistic to assume the same of their masters, several of whom have a far better idea of what is really at stake.

The Sena’s former culture minister Pramod Navalkar has the answer squarely in his sights when he explains that advertisers target young consumers, who are more easily influenced, to sell their products. Absolutely true. But what he doesn’t add is that with well over half of India’s population less than 25 years old, anyone who captures the minds of the youth can eventually wield serious power.

This explains why even a corny greeting card is worth fighting over for some. Even if St Valentine is more likely to be Indianised than the other way around.