Kaavya got caught. But borrowing isn't exactly thievery in the Indian lexicon, nay, it's a talent. 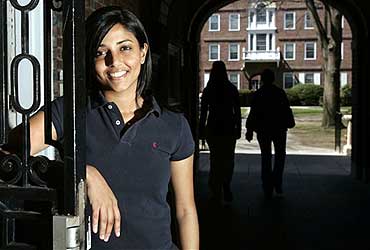 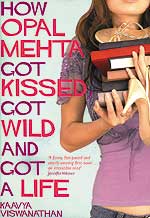 Now, if only all plagiarists were smart, photogenic, rich teenagers, studying at American Ivy League universities, with big bucks and movie deals riding on their debuts. Not only would their unwitting victims be assured of instant attention, but a healthy dose of free publicity as well.

It's a lesson Dr Rashmi Sanghi might easily draw from the Kaavya Viswanathan scandal, which saw the young author drown in an avalanche of evidence that she plagiarised freely from multiple sources. Sanghi, a senior research scientist at our very own "branded" educational superstar—the Indian Institute of Technology, Kanpur, discovered in 2002 that a paper she had submitted to a scientific journal had been plagiarised, from under her nose, by a lady colleague in her own lab. In a twist worthy of a TV serial, both women are wives of senior faculty.

Sanghi lodged a complaint with the IIT director, and a committee was set up to investigate it. The Society for Scientific Values (SSV), a respected scientific community watchdog, took up cudgels for Sanghi, after satisfying itself that her complaint was genuine. But despite badgering IIT Kanpur, it has not managed to extract an official verdict. "The SSV is concerned that an institute of national importance is not prepared to face the reality of a scientific fraud committed by a scientist of the institute," declares the watchdog on its website. But is anyone reading? Far from being dismissed or even publicly reprimanded, the alleged plagiarist continues to work in the same lab—and has since been promoted!

Plagiarism, in an Indian context, is not just about the things that make us laugh (perhaps more often than we should): Bollywood directors churning out frame-by-frame copies of Hollywood movies or desi Versaces ripping off the real thing for Indian ramps. It is, even more worryingly, about the brazen shoplifting of words—hundreds of thousands of them—in the academic world, the media, in publishing, and on internet sites. As we devour every copied phrase in the still unfolding Kaavya case, and speculate on who's the 'real' villain of this publishing potboiler—the overachieving teen or her packagers, we should also be asking ourselves: how come there isn't such a huge fuss when it happens in India? 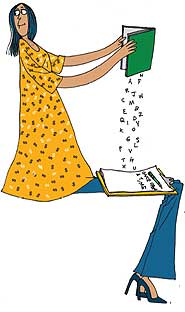 Partly, perhaps, because in India, plagiarism begins early. In school, to be precise, where "a photographic memory" and ability to "internalise" (to borrow Kaavya's well-chosen words) exact phrases that belong to other people is a talent to be envied. Says well-known novelist Manju Kapur, who has been teaching Delhi University undergraduates English Literature for the last 25 years, "Schoolchildren are encouraged to plagiarise—to reproduce someone else's writing is seen as a sign of success."

At the undergraduate level, the rules of the game don't change significantly: plagiarism may not be actively encouraged, but it is rarely frowned upon. "It's widespread among undergraduates," says Kapur. "Assignments are a mishmash of paragraphs lifted from the writings of literary critics." Comments academic and Knowledge Commission member Pratap Bhanu Mehta, "When western students plagiarise, it's often a wilful act, but Indian students seem to be less conscious that they are plagiarising, or that there is something wrong in doing that."

Kapur maintains that those who ascend the education and research ladder unlearn the early lessons in plagiarism. But others argue that worrying numbers, in fact, do not—even if they know by now that they're committing a cardinal academic sin. "It's happening in big universities," says the SSV's president, Prof K.L. Chopra, a former director of IIT Kharagpur, "it is happening in the IITs, in the labs of the Council of Scientific and Industrial Research, and the Defence Research and Development Organisation, and more commonly in smaller universities. Many PhD theses are being plagiarised and lifted work is finding its way into prominent Indian journals, because of a poor system of refereeing. But no one wants to admit and investigate it."

There might not be evidence, beyond the anecdotal, to suggest that there's more plagiarism in India than anywhere else—in a cut-and-paste Internet era, who can deny that it happens everywhere—but the way various stakeholders choose to deal with it suggests a moral haze around the issue.

In academia, when internal whistleblowers "out" plagiarism, it rarely leads to swift action. In the case of Kumaon University vice-chancellor B.S. Rajput, who was found to have co-authored a research paper on black holes that lifted large chunks from a Stanford professor's work, petitions by Indian scientists to President A.P.J. Abdul Kalam, the University's Visitor, and other concerned officials, had no impact until a bunch of international scientists, among them Nobel laureates, took up the issue. And even after being indicted in 2003 by an inquiry committee headed by a former high court judge, Rajput was allowed to resign, rather than being dismissed from his post. "So he moved on to become the director of a private technical college," says Chopra.

The publishing world in India, meanwhile, doesn't exactly rush to recall controversial books. A notable exception was Indrani Aikath-Gyaltsen's acclaimed 1994 novel Cranes' Morning, withdrawn by Penguin after it was found to have been plagiarised. The author died mysteriously.

More recently, in 2004, Outlook reported a controversy involving management guru and author of self-improvement bestsellers Shiv Khera, with retired railway official Amrit Lal alleging that there were 34 instances in Khera's 2004 book, Freedom is not Free, where sentences and paragraphs had been lifted almost verbatim from a book Lal had written. "It was like seeing a priest coming out of a whorehouse," Lal told Outlook then. Khera denied plagiarism but conceded to Lal that it may have "escaped our attention" to give credit to "some sentences" from his book. A veil has since been drawn over the controversy, with the two authors reportedly reaching an undisclosed agreement, and Khera bringing out a revised 2005 edition of the book. Khera's publisher, Rajiv Beri of Macmillan, who maintained a discreet silence at the time, now says, "There may have been an inadvertent reflection of another person's thoughts and ideas." And yes, Khera will be penning new books for Macmillan.

And then, there is the media. The internet has not just hugely multiplied opportunities for the scissor-happy, but, ironically, also for their detection. A writer snitches from what he or she may believe to be a little-read publication, and blogosphere erupts in outrage. Striking similarities between a film review by a senior journalist with the Times of India and a review of the same film by a Chicago Sun Times reviewer hit blogosphere first. So did similar charges about The Hindu's film reviewer. Both reviewers continue to review, and if any actions were taken by their employers, they are not in the public domain.

Nor do we know the Hindustan Times' official position on possibly the most high-profile case of media plagiarism in the country, involving its editor, V.N. Narayanan, who resigned in 1999 after a rival newspaper reported that he had plagiarised a column written by the UK Sunday Times columnist Bryan Appleyard. (Narayanan now guides journalism students as head of Bharatiya Vidya Bhavan's Harilal Bhagwati College of Communication and Management in Bangalore.) More recently, a sports journalist who was found to have plagiarised from Britain's Guardian newspaper was quietly fired by one employer but soon got hired by another.

"Newspapers, even big newspapers, do not respond with alacrity to charges of plagiarism," points out media critic Sevanti Ninan. "The reader deserves an apology which s/he does not get." However, in a departure from the norm, The Hindu's recently appointed readers' editor, K. Narayanan, responded, point by point, last week to a complaint against freelancer Neeta Lal's article in the paper, which also included a charge of unattributed borrowing. He concluded that there had been a "lack of fairness and journalistic ethics" on the part of the writer. Will the paper continue to use her? "That's for the editor to decide," Narayanan told Outlook. However, in general, he believes that when a writer has been found to plagiarise, "everything he or she writes will be suspect". And here's a reader's suggestion, which he rather likes: Let every piece of writing come with a declaration that it's an original piece of work.

Return Of The Red Glue