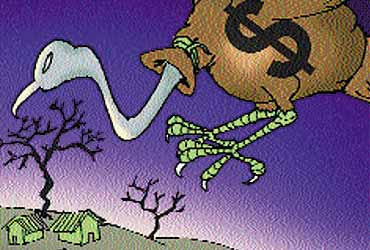 outlookindia.com
-0001-11-30T00:00:00+0553
Murli Deora, Rajya Sabha member and longstanding friend of Dhirubhai Ambani, in an article in the Business Line on July 7, 2002, recalled that the latter had a few days before his illness expressed concern over the deployment of our surging foreign exchange reserves. "What’s the use? The government is investing them in US treasury bonds which yield 2.5 per cent while borrowing at 11 per cent." Today, the reserves stand at US $75 billion and one should not be surprised if the figure crosses the 100-billion mark in the foreseeable future. In fairness, the government has taken a number of positive steps taking advantage of the comfortable reserves. These include prepayment of several foreign loans ahead of schedule and retiring costly debt. One area which needs some thinking though is our policy towards foreign aid—both as recipient and as donor.

There is no denying that the foreign aid policy pursued by several donors over the past several years has been in the form of ‘tied aid’, namely aid limited to procurement of goods and services from the donor country. In his book Quiet Crisis in India Economic Development and American Policy (1962), John P. Lewis writes: "...it seems eminently reasonable to require that US dollar aid to a country like India be used for purchases from American suppliers, as the Export-Import Bank has always done and as dlf (Development Loan Fund) started doing in late 1959. Moreover, this is one restrictive practice that does not appear to have been American-pioneered. On the contrary, when it tied dlf loans to country-of-origin purchases, the United States finally fell in line with what every other national government assisting India had been doing as a matter of course from the beginning of its Indian aid program."

The neglect of agriculture and agricultural research till 1969 is often attributed to the comfortable food situation, thanks to the import of foodgrains under Public Law 480 (PL 480) from the US (though it was the general view that imported wheat from there was no match to the quality of the ‘swadeshi’ wheat grown in Punjab). Several bilateral donors have the habit of dumping their obsolete machinery on developing countries and least developed countries (LDCs) under the garb of aid. Aid from the UK is one hundred per cent grant but totally tied to import of machinery and equipment from that country. Simultaneously, one has no alternative other than to buy spares from the same source. Similar is the position with regard to aid from several other countries like Australia, France, Germany and Russia. In the ’70s and ’80s, when foreign exchange was scarce, India used to follow the procedure—going in for a global tender and utilising the available aid to procure it from the lowest tender. There used to be competition among donors to get the order for their own mncs and it was not an unusual sight to see concerned country representatives making a beeline for the North and South Blocks. The interested countries also used to match prices to secure orders for their MNCs.

Even the procurement policy pursued by multilateral institutions like the World Bank is not fully "untied". There are cases to show that the equipment classified as ‘proprietary’ by the Bank has turned out to be more expensive than equipment available elsewhere. To cite an example, in the early ’80s two fertiliser projects—the Hazira Fertiliser Project (Gujarat) and Thal Vaishat Fertiliser Project (Maharashtra)—came up simultaneously. The Hazira project was largely funded by the World Bank while the Thal Vaishat Fertiliser Project was funded from bilateral sources. It happened that some of the equipment classified as ‘proprietary’ by the World Bank for Hazira worked out to be far more expensive than similar equipment procured from elsewhere for the Thal project. The imports of oil rigs for the petroleum sector till the 1990s financed by the World Bank are replete with several such cases.

IDA loans carry a service charge of 0.75 per cent with a 10-year grace period and repayable over 50 years. On the surface it looks attractive but if one takes into account the exchange rate of the rupee at the time of contracting the loan and time of repayment the rate of interest could well work out to be above 40 per cent. At the current level of reserves, there is no need for India to continue as an aid recipient—from both bilateral and multilateral sources. On the other hand, India could set an example by emerging as a donor of ‘untied’ aid. Japan offers a refreshing example in this regard. Since 1971, it has been handing out "untied" loans starting with a loan to Burma. In 1974, the Development Assistance Committee (DAC) adopted an MoU on LDC-untying, which meant the recipient country could procure from either the donor country or any developing country falling within the DAC definition. In 1978, the Japanese government announced its policy of progressing general-untying of ODA loans. Yen credits from Japan are available for procurement of goods and services from Japan and other developing countries, including India. In a number of cases, the yen credits have been utilised for procurement of machinery and equipment from countries like Korea as well as India. The procurement policy under the foreign currency credits from India could permit tenders limited to India and developing countries as in the case of Japan. A beginning could be made by earmarking US $10 billion for its foreign aid programme—a figure affordable in today’s context.

(The author, a Chennai-based IAS officer, can be contacted at sitharamgurumurthi@yahoo.com)