Hemmed in by the Left and the Right, Manmohan stands at the crossroads 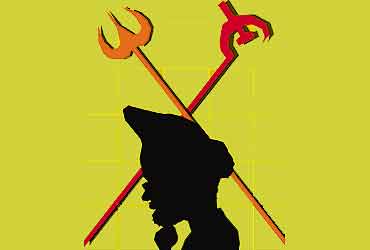 outlookindia.com
-0001-11-30T00:00:00+0553
Now we know what it's like to be caught between the devil and the deep sea, between a rock and a hard place. The Indian polity is trapped between the BJP, the sore losers, and the Communists, the sanctimonious winners, between the obscurantist Right and the obstructionist Left.

The confrontational politics of the BJP is matched only by the agitational approach of the Communists. Which government would want to take the unpopular decision of hiking oil prices unless global prices forced it to? But both the Left and Right are stomping the streets, competing to win the hearts of the common man that was never theirs in the first place. It is a curious situation. The Communists have power without responsibility. Prime Minister Manmohan Singh has responsibility without full power. And the BJP has neither power nor responsibility. What a mess!

Given what the Communists have done in Kerala, Tripura and especially West Bengal, their protests against the fledgling government appear hypocritical, even farcical. Certainly it isn't fair to dismiss all their objections. They do act as checks and balances, apply the brakes, re-examine accepted truisms. Why, for instance, should the government sell off profitable public sector enterprises? Or, why can't import and excise duties be streamlined so that the government gets its revenue without hiking prices? Creative approaches can solve old problems. Perhaps, what irritates is how the Communist leaders say what they have to say. Be they ageing Turks or old perennials, most of them look like protagonists puffed up with a newfound sense of self-importance. This is their 15 minutes of fame. Strutting and lecturing on the national stage is such a rare chance. This is their opportunity to go mainstream, spread their wings from their regional fiefdoms. They would do themselves a great service if they used this opportunity to realise two things. First, they are not the sole custodians of public good, exactly as the right-wingers weren't either. Periodically they should remind themselves exactly how many seats they have in Parliament. Then they would realise they do not have the mandate to sit at the driving wheel and steer the nation. Second, not unlike the BJP, the Communists should engage in a bit of self-introspection: why are they still confined to only three states?

But introspection requires humility, a quality that seems alien to the self-righteous know-alls of both the Left and Right. Ironically, the only man who seems capable of introspection in the current political circus is our prime minister. India has rarely been blessed with a man of such decency and integrity, brilliance and modesty, efficiency and humaneness. There are few presidents or prime ministers around the world who have a better grasp of economic fundamentals than Manmohan Singh. Not just India, the world is at the crossroads today—democracy, globalisation and economic reform have swept the globe, but rising disparity, injustice and inequity have made it unsustainable for reforming countries to continue on the same beaten track. India Shining may have exposed the cruelty of disparity in India, but the same tragic saga of urban-rural, rich-poor divide is devastating China, Russia and others.

As finance minister, Manmohan Singh showed how to initiate, pace and nuance reforms in a difficult country like India. Precisely because he is a man of introspection and creativity, he realises it is not sufficient to do more of the same now. He has to change gears, shift focus from the mainstream to the marginalised. This time around he must use his skill to give the poor a stake in progress. He is the perfect man at the perfect time. If he could help develop India's underclass, he would have done a great service not just to the country, but the world. His reforms, first for private enterprise and then for effective governance, could become an international model, the roadmap for the much-needed Third Way or Middle Path that combines the best of capitalism and socialism.

When he was finance minister, Manmohan Singh once told me he was able to do what was needed to reform India's antiquated economy without interference because his prime minister, Narasimha Rao, gave him complete freedom and assured him that he would take care of the political fallout. Rao acted as the buffer between him and the legion of angry protesters, most notably fat-cat Congressmen appalled that their empire of power and patronage was being wrecked from within. In a sense, Manmohan Singh is lucky this time too. Given her position, Sonia Gandhi could be the perfect buffer so that Singh has the political space and freedom to reform India in a humane way so that the poor too can benefit. No person is better poised to succeed than this prime minister and if he does, then India would take her rightful place as a world leader, the trailblazer of the Middle Path, a role achieved not through nuclear bombs, but through intellect, creativity and compassion—qualities that the Indian civilisation is fabled for.

But all this seems a fool's fantasy when one watches the antics of the Left and the Right. There are no soul-stirring qualities on display here. It's the usual medley of petty-mindedness, jealousies and rivalries. No one is thinking of the big picture. Everyone has their fatal flaw and Manmohan Singh's appears to be his seeming lack of firmness. The honeymoon phase is ending, inflation is rising and his window of opportunity to establish his authority is closing. He continues to be buffeted by the Left and Right. The Left objects, the Right protests. The Left undermines, the Right provokes. The Left accuses, the Right attacks. Left, Right, Left, Right—is the Manmohan Singh government marching to its doom? Could be, unless the prime minister takes charge and steers gently but firmly in his own direction.