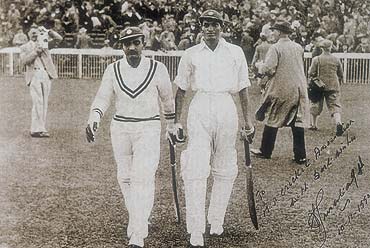 The Illustrated History Of Indian Cricket
By Boria Majumdar
Lustre Press/Roli Books Pages: 256; Rs: 1,295
Boria Majumdar’s book is a trip down memory lane. For cricket-crazy Indians who grew up on the game, the pictures and text vividly bring back the great events. There’s something here for even the most dedicated and informed cricket fans on how the game started in India. As Majumdar says, the book is an attempt to tell that story through pictures, many of them not seen before. It highlights the highs and lows of Indian cricket, including the ’83 World Cup win and the abysmal 42 all out in 17 overs at the Lord’s in 1974 with a picture of the Lord’s Score Board.

Boria captures the paradox of the game where blue-blooded aristocrats like Ranjitsinh, the maharajas of Patiala, Porbandar, the royal prince of Vijayanagaram and the two Pataudis played along with the great C.K. Nayudu whose bank ledger, reproduced here, shows a princely balance of Rs 306. He has gone to great lengths to collect copies of sports magazines of 1833, besides photographs across generations peppered with anecdotal facts. In Nagpur, for instance, a match was played between soldiers and the Nayudu Club XI in 1896 where C.K. Nayudu’s grandfather distributed copper coins to mark the his grandson’s birth. India played its first Test at Lord’s on June 25, 1932, creating a sensation by reducing England to 19 for 3. India’s first official tour to England in ’32 had an unusual slogan: ‘No Politics, No Caste, Just Cricket’. 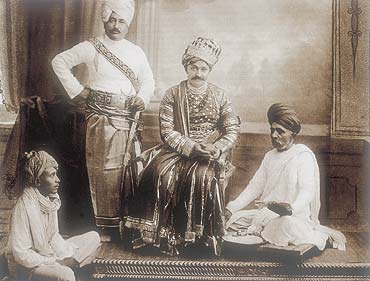 In the evolution of Indian cricket through the decades, it was Nayudu who dominated the game in the ’30s. The ’40s saw greater depth in the team from Pataudi Sr to Vijay Merchant, Vijay Hazare, Lala Amarnath, Vinoo Mankad, Abdul Hafeez Kardar and Mushtaq Ali. Feudal India had a natural preference for royalty at the helm. The maharaja of Patiala was once nominated as captain and he withdrew in favour of the Porbandar maharaja. A handwritten letter from Mushtaq Ali refers to the unrest in the Indian dressing room during the ’46 tour of England. One of the two rare pictures is from that tour of England—the foursome of Mankad, Pataudi Sr, Amarnath and Merchant. The other frame of value captures the five great spinners of the ’60s and ’70s, all on the same tour. One of these five, Salim Durrani, is now rarely remembered.

The highlight of the ’50s is the record opening partnership of Vinoo Mankad and Pankaj Roy, culminating in the 1959-60 win over Australia at Kanpur. The ’60s appear to be dominated by the youngest-ever captain, the 21-year-old Nawab of Pataudi, and the great spinners. Then we have Sunil Gavaskar in the ’70s, Kapil Dev in the ’80s and Sachin Tendulkar in the ’90s.

There have been many changes over the years from players’ outfits, the social character of the game to its commercial content and the quality of stadiums. Even cricketing controversies are no longer the same. What remains unchanged is India’s romance with the game.

(The author is BJP general secretary.)

Too Much To Bear