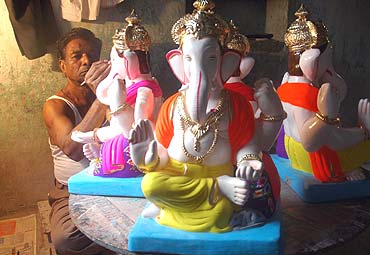 outlookindia.com
-0001-11-30T00:00:00+05:53
Nestled peacably in the Sahyadris, skirting the Konkan coast, lies the sleepy town of Pen. Like many such towns, its landscape is a familiar mosaic of farmland, tile-roofed houses, thatch-roofed huts, winding paths and one central road with specks of commerce. But what makes Pen, two hours from Mumbai, different is that it is the Ganesha capital of India. Here, making Ganesha idols is a passion, a tradition, and a thriving industry.

Idols marked 'Made in Pen' enjoy a special prestige, and command higher prices than those crafted in Mumbai's Parel area. In Pen, every household, except those of the Dalits, is engaged in some way in the Ganesha industry. Pen now boasts of 500 units producing about five to six lakh Ganesha statues, with an auspicious turnover of nearly Rs 6 crore annually. Over a quarter of the Pen idols wing their way abroad every year, the rest find their place in discerning homes and in pandals across Maharashtra during the 10-day Ganesh Chaturthi festival.

"I am the fourth generation to be doing this," says Shrikant Deodhar. The Deodhars are a name to reckon with in Pen—their Ganesha idol unit, called Kalpana Kala Mandir, is a landmark, and its billboards boast pictures of Deodhar conducting idol-making workshops around the world. This year, he will demonstrate his art in Basel, Switzerland. "I'll take some moulds and show them how we craft the idols," he says, "And then I'll talk about Indian culture."

What makes the Pen idols so special? The local shadu clay and the skill of the artisan families, say the veterans. The clay from around the region is reputed to give the best stability for volume for an idol—it is pliable for moulding but also sturdy enough to hold the shape. But with shadu supplies dwindling, local artisans now get a similar variety from specific areas in Rajasthan which they say matches the locally available quality. Rajasthan artisans, say Pen loyalists, do not quite craft the clay the way they do. Besides this arrangement, commercial constraints have now pushed many artisans to forsake clay for Plaster of Paris.

Idol-making in Pen started, as such things often do, by accident. "Poorer people used to make the idols and barter them with landlords in exchange for food, or as rent. That's how the first two generations of my family started," Deodhar recounts, "Around the '60s, factories began to be set up because of the spreading fame of the Pen idols. Then it grew like anything. People wanted jobs and there were none. This became their livelihood." In the early years, Pen artisans sculpted other idols and statues too, but gradually the Ganesha idol took precedence in every household unit or factory. Soon, Pen was synonymous with the elephant-headed god. The older, established factories—where many artisans learned their craft or honed their talent—make around Rs 8-9 lakh a year from Ganesha idols.

Despite other employment opportunities opening up now, most people in Pen still follow the same profession. That's because it's become a vocation, a passion for them, say old-timers. And the fact that nearly every house has a backyard with idol-making activities means that children have grown up learning the art. Yet another reason, as Deodhar says, is that it's a skill that needs no formal education. "You can join me as a cleaner, learn the skill and work your way up."

There's enough demand to keep Pen's artisans busy all through the year—as soon as Diwali is over, they start taking orders for the following year. Reputed artisans and veteran family-run units like Deodhars will not part with the secrets and techniques of creating the all-important mould. Each unit or factory boasts of its own unique mould. In a sea of smiling elephant-god faces, the differences are indeed visible. The quality of craftsmanship varies, as does the line of sculpting. The devil—or in this case, god—lies in the detail: the contour of the eye, the roundness of Ganesha's belly, the gesture of his raised hand and so on. Some, clearly, are better at the art, and Pen knows who the masters are, while regulars from other towns know who to place orders with. 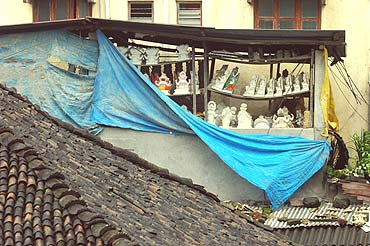 In one corner of town is the small shack where Vijay Mukunda Hajare is painting purple robes and yellow scarves on to a series of statues on a round table in front of him. "I've been doing this for 40 years," he says, "It's my family business." He takes special pride in the quality of the watercolours he uses, and has refused to switch from clay to Plaster of Paris. "Working with clay is more difficult, we can make only 500 idols a year—but I won't sacrifice quality for quantity," he says.

D.M. Valankar is reputed as Pen's 'eye specialist'—for 25 years now, he has been painting eyes onto vibrantly hued Ganeshas with the assured hand of a master and the reverence of a devotee. After Valankar has put in curling lashes and a fleck of white inside the pupils, his Ganeshas somehow begin to embody human qualities like intelligence and compassion.

There are other issues, though. "Environmentalists ask us to use eco-friendly colours," says Deodhar, "like haldi (turmeric) to paint robes yellow." But that's easier said than done, he scoffs. "Haldi will get washed off in the rain, and besides we don't find eco-friendly colours in large supply."

As the countdown to Ganesh Chaturthi (on September 15 this year) begins, workshops across Pen are beginning to empty out. Truckloads of Ganeshas have already been dispatched to Mumbai. Phones and computers are bringing in fresh enquiries. An old customer phones to reassure the artisan that his Ganesha idol is exactly like the God himself, and could he please make a slightly bigger one next time? And, while he's at it, could he craft a smaller one for his brother in the US and ship it by July next? A 10-day break, says Deodhar, and he will start again. And so Pen's Ganesha story continues.