POTO's legislative fate hangs fire. But the government tests its muscle on the PWG and the MCC. 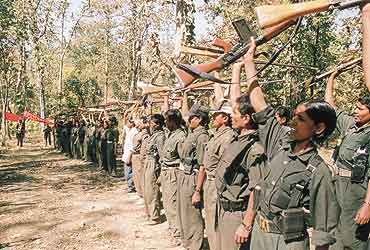 outlookindia.com
-0001-11-30T00:00:00+05:53
The government's decision to ban two Left extremist outfits, the People's War Group (PWG) and the Maoist Communist Centre (MCC), under the Prevention of Terrorism Ordinance (POTO) has evoked a mixed response in Andhra Pradesh, the state where the PWG has had a prominent presence for the past three decades. The ban comes in the wake of stepped-up Naxal violence in Andhra Pradesh and Orissa and the authorities in the two states believe it will give them an edge in their war against the rebels.

But civil rights groups say this is yet another arbitrary ban under an ordinance which is unlikely to be passed by Parliament. According to them, the ban will do nothing more than give public servants more room to act with impunity against innocent people. Says K.G. Kannabiran, national president of the People's Union for Civil Liberties: "poto is a new toy for the police to play with. The real fallout of this ordinance will be for ordinary people who come into contact with the Naxals."

However, officials in Hyderabad and Bhubaneshwar say the ban was called for, given the blatant violence unleashed by the PWG. Its most audacious attack was the storming of a milk-chilling plant last Thursday night in Chittoor district of Andhra Pradesh. Attacking a small, remote plant is nothing new, but by targeting a Heritage Foods-owned establishment, the Naxals took their fight right to the doorstep of chief minister Chandrababu Naidu. The Naidu family reportedly holds 27 per cent stake in Heritage Foods and his wife Bhuvaneshwari Devi is the executive director of the company.

That same night the rebels also attacked a Tata Coffee plant in Toorpan, Medak. After ensuring that nobody was left inside, the rebels blasted the place with half-a-dozen explosive-packed buckets strapped on to machines in the plant. The workers were told that it was a retaliation against "the Tata's and Birla's support for poto".

After blasting the Tata factory the guerrillas barged into the home of former air chief marshal Denis A La Fontaine, who lives close by, and took away his 0.9 mm pistol.

Almost simultaneously, some 15 km away, in another secluded pocket in Medak, a smaller group of five carried out a similar attack on a granite factory partly owned by Union minister of state for defence U.V. Krishnam Raju.

In addition to these attacks, the PWG also launched simultaneous raids on three police stations in Vishakapatnam and East Godavari districts. They also killed three people—two local politicians and an alleged police informer. The house of an MLA was burnt in Medak and a district court building razed to the ground in Adilabad. A coffee research centre in Vishakapatnam and the AP Paper Mills factory were also attacked.

The Union home ministry was also perturbed by reports that the PWG had struck roots in Orissa's tribal-dominated Malkangiri and Rayagada districts. The blast in cooperation minister Arvind Dhali's house in Malkangiri and the arson unleashed in Rayagada on December 3-4 was what pushed the Centre to implement the ban. The PWG has also been active in Chhattisgarh and the tribal areas of Madhya Pradesh. As for the MCC, there has been continuing violence in Bihar and Jharkhand.

While the use of POTO has come in for criticism, very few can condone the violence unleashed by the PWG. Some mainstream Left parties are uneasy about the attacks on industry. "These factories are all insured so the owners will recover their losses but in the end it's the workers who'll lose their wages and workdays," says Sudhakar Reddy, secretary of the AP unit of the CPI. He's also concerned that the attacks will unleash a new cycle of violence, scuttling any chance of peace talks between the PWG and the government.

According to the Andhra Pradesh police, the ban—which will be in place for five years even if POTO is not passed by Parliament—was absolutely essential to bring PWG activists to book. According to officials who have served in Naxal areas, people are scared to testify against members of the PWG for fear of reprisals. But now with confessions before a police officer becoming admissible in a court under POTO, convictions, they feel, will become easier.

Villagers in the Telangana region, which has been a traditional Naxal stronghold, often find themselves caught between the police and the rebels. In fact, some villagers complain that they are beaten up by the police in the day and by PWG members at night. Now the situation could worsen. "Anyone who comes in contact with PWG members can be picked up under POTO and it will be up to the arrested person to prove that he has no connection with the rebels. But by the time they do that they would have spent three or four years in jail," warns Kannabiran, who is also a member of the Concerned Citizens' Committee, which is trying to bring the PWG and the government to the negotiating table.

There was a glimmer of hope recently that the two sides might move towards talking peace, with senior PWG leader G. Narasimha Reddy telling reporters that they were ready to hold talks with the government if it agreed to declare a ceasefire. But the latest move to ban the PWG under POTO shows a hardening of the government's attitude, further complicating hopes of finding a negotiated settlement.

The latest round of violence has also thrown up some new concerns. The police are worried by the PWG's growing ability to strike beyond its traditional stronghold in the Telangana belt. Meanwhile, the political leadership is also rattled by this new strategy targeting industry. There are also fears that there may be retaliatory strikes after the ban. Warns Naidu: "By blasting factories and industrial establishments the rebels want to destabilise the economy. Their threat to keep attacking MNCs is causing concern among the business community."

It remains to be seen if the ban will help the police of Andhra Pradesh and Orissa to rein in the PWG. Should they fail, soft VIP targets in the two states could come in the line of fire in the coming days.

'Congress Is Now A Mean Machine'