Eiffel Tower sellers will always be around. We need checks and wits. 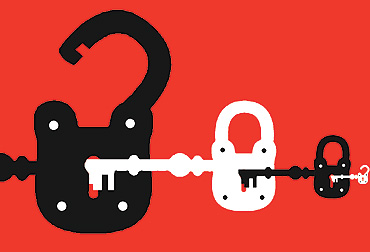 outlookindia.com
-0001-11-30T00:00:00+0553
This is the season of scams. B. Ramalinga Raju of Satyam Computers sits in a jail in Hyderabad. Bernard Madoff made billions of dollars in the US with one of the most outrageous Ponzi schemes. Before these, there was the racket of banks and investment companies duping ordinary people into taking home loans with all kinds of hidden clauses. As these people began defaulting on the loans, a financial crisis was precipitated in the US, which soon infected other nations, morphed into an industrial recession and is now causing incomes to decline and jobs to vanish in the US, Europe, China and India.

What is the source of this financial crisis? Barring a few ideologues on the right, everyone agrees that financial markets need governmental control, and a factor behind the current mayhem was the failure of controls under the Bush administration.

As India begins to industrialise, these are problems we will have to contend with. In crafting our controls, it is important to recognise that this is not an easy task if we do not want to make the mistake we made under the 'licence raj', when the propensity was to bring all entrepreneurial activities to a halt in order to stop the bad ones. Also, and this is not widely understood, financial crimes are a moving target—guarding against them calls for continuous regulatory innovation.

The human mind is a phenomenally inventive organ that keeps on creating new ideas—in the case of scamsters, what their minds come up with is ideas for taking advantage of ordinary people. Instances abound through history. The early European settlers in the Americas grabbed land by force and also through novel forms of deceit. In Stuart Banner's book on how the settlers took away land from the natives, there are several accounts of 'voluntary' deals, reminiscent of today's subprime mortgages. In Maine, in the early 18th century, the settlers acquired "a span of land" by selling "a bottle of rum". What is a "span of land"? Banner quotes from archival material: "Extend your hand as open as possible, then bring the hand close to the eye looking upon the Horizon and so far as the little finger and thumb extend from each other from the top of them, on that Horizon is called a span which perhaps is 20 miles."

The prototype of modern investor scams is the "Ponzi", named after Charles Ponzi. His high point was stealing millions from ordinary people by running a classic Ponzi scheme—paying old investors with the money received from new investors. Evidence of his inventiveness was on display in smaller ways too: when he went to jail in Canada for a petty crime and did not want his mother to know, he gave her his address and told her that he had taken up a job as the jail warden's assistant.

Consider a technique some scamsters have used recently to build up investor confidence. They send out letters to people—let's say 256 of them—predicting that, over the next week, the share index will rise. To another 256 persons they send letters with the opposite prediction. Then, at the end of the week, they pick the set to whom the right forecast was sent, break them up into two lots of 128 each and send to one group a forecast of a rise in the index over the next week and to the other group a forecast of a decline. Then take the group that got the right forecast, break it up into two groups of 64 each and repeat the same. After some time, they can hope for a small group of people mesmerised by their predictive powers and ready to invest in their wonderful new get-rich scheme.

The control of scams needs not just regulation but continuous research—if it did not sound so gross, I would call it 'scamistry'—and innovation. There can be no denying that a lot of entrepreneurial practices that we consider standard and legitimate could border on scam and deceit. The survival of decent society requires us to draw lines that carefully separate the legitimate from the baited inveiglement and to be prepared to change its contours with changing times.

PS: With all this scrambling for cyber property, I thought I should avoid the mistake of the native Americans and lay claim to the web domain "basu.org". I have just learned that I am too late. The settlers are already there. In the UK, it's the British Association of Softball Umpires. To rub salt into my wound, they have set up a society, Friends of BASU, with free membership to "all local umpires who may have attended a BASU course."