On the insufferable preponderance of dhania in north Indian food 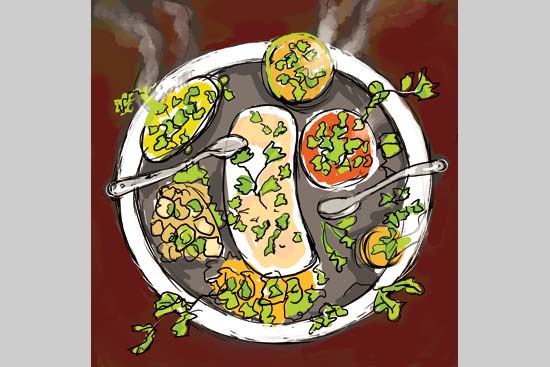 A friend of mine from Bombay wanted to go to a dhaba in Delhi. So we drove a little towards Hapur, stopped at a highway ‘hotel’, and  he ordered a thali. When it came, the plate looked like how a cricket ground would from straight up, a somewhat overgrown outfield with a green-top pitch. All the dishes—sabzi, dal, kadi, another sabzi, chhole, raita—had a thick carpet of dhania on them, so much so that the friend had to look under it to see what the dish was. In the middle of the thali—the pitch—were the naan and roti, patted on with copious amount of the same green herb. Only the gulab jamun didn’t have dhania, but to complete the artifice, it had shavings of green faux pista.

Why do north Indians smack anything edible they can find with dhania?

On its own, it is quite harmless, useful even. A rasam tastes splendid with a dip of a bunch of kothamalli when it is just near boiling point, or a plate of poha with a gentle sprinkling of kothimbir over the lemon juice does add quirk to its dirty yellow dullness (is it kosher to describe Marathi dishes thus now?). In other cuisines too, in Chettinad, in Udupi, in Awadh, in Bengal, in Kathiawad, in Wazwan, in Konkan, in Malabar, in Andhra, in Sindhi, in Shekhawati, in Parsi cooking dhania is certainly used but with some thought.  But to slather everything from tandoori chicken, seekh kabab, shammi kabab, dal makhni, dal fry, chhole, chana, rajma, dum alu, paneer lababdar, paneer pasanda, mutton barra, mutton tikka, mutton korma, murg afghani, papri-chaat, tikki, dahi-bhalla, naan, missi roti, fish amritsari, cream chicken, raita, salad, and then serve all this with dhania chutney on the side?

We in the north grab the dhania the sabziwala gives free, then sow it liberally on whatever we cook. Why is it that north of aravalis we virtually graze on it?

Our Delhi office is next to the world-famous Rajinder Da Dhaba and while it is in the swing of things in the evenings, there are two dedicated men, sitting behind mounds of wilting, green, cut dhania, to smother every dish with it before it is handed over to the hungry. The fragile, nondescript plant, which can easily be mistaken for something only goats masticate on, barely able to stand on its stalk, apparently grows wildly from southern Europe and north Africa to southwest Asia. But have you ever seen a pizza, gazpacho or khau suey dunked in cilantro? They say that a lot of our character is revealed by how we act when something is offered free. We in the north grab the dhania the sabziwala gives free with both hands, shred it and sow it liberally on whatever we cook next. Even if it’s just a sandwich, there will be dhania chutney in it. Why is it that only those living in the north of the Aravalis virtually graze on it?

The first bite of any dish then has the same taste of chewing raw leaves, yes fragrant and pungent, but raw leaves in the end. In the hing wala alu, before you get to the explosive asafoetida, you have to pass through forests of dhania. In black chhole, the kick of tamarind and coarsely ground anardana, the pepper-clove-cinnamon-cardomom masala, the subtle hint of tea, added to colour the chana, all have to wait as you munch on these tiny green leaflets. I have even found it on biryani. Why would anyone go through the trauma of making meat biryani, agonise over getting the long-grain rice cooked to perfection (not too hard, not too soggy), of bhunoing the meat till it’s just a little underdone so that it comes off the bone when put in dum later, to not let the robustness of the marinade vanish with too much ghee, decorate it with a few strands of saffron and drops of rosewater, and in the end just before serving add a heap of dhania? Or take the chaat. It anyway has enough masalas to launch a missile. Now, along with the papri and bhalla, with many spoons of this masala and few other powders, with dahi, with tamarind, with green chillies, with black salt, with pomegranate, with juliennes of ginger, with lemon juice, why finally dump a bouquet of coriander on top of it all?

I know in a piece like this one must quote from some ancient scriptures, talk about the etymology of coriander, who brought it to India (as nothing we eat ever seems to have grown here), how it was a treasured herb which the Arabs and the Chinese traded in, its mention in epic poetry and literature, but I refuse to Google dhania or look at its Wiki page.