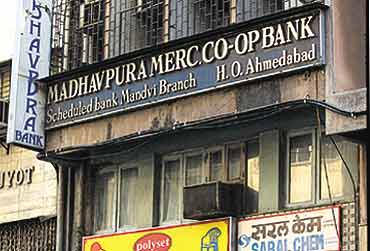 outlookindia.com
-0001-11-30T00:00:00+0553
Gujarat's tottering cooperative banks were delivered a bodyblow two weeks ago, when the Reserve Bank of India (RBI) issued a notice to 161 of them to treat their Rs 1,100 crore locked up in the scam-tainted Madhavpura Mercantile Cooperative Bank (MMCB) as non-performing assets (NPAS). The terse notice meant that atleast 60 cooperatives may have to shut down as their networth will turn negative or they wouldn't have a strong enough balancesheet to commence normal business. This may put in peril the savings of lakhs of small depositors. As we go to the press, the RBI has still not revealed the names of the banks who'll be hit by its move, obviously fearing a run on them. "But one day, this too will be known," says Prakash Gurjar, president, All-Gujarat Cooperative Bank Account Holders and Depositors Association.

The cooperatives are miffed that while the RBI bent over backwards to announce the merger of Global Trust Bank with Oriental Bank of Commerce, it simply declared cooperatives' deposits in MMCB as NPAS. "The Gujarat government has failed to understand the predicament of the cooperative banks and could not get the Centre to get a similar deal for MMCB. And mind you, the Gujarat government had failed to get this done even when the BJP-led NDA was in power at the Centre," asserts Gurjar. Natwarlal Patel, former chairman of Gujarat Urban Cooperative Banks Federation, who resigned from the board of MMCB's revival committee in 2001, agrees that a merger with a stronger bank could have been a viable option to revive MMCB and, thus, save other cooperatives.

Instead, the RBI kept reiterating that it's trying to find other options to turn around MMCB. Says Patel: "I realised there was no possibility of MMCB's revival as recoveries were not taking place and the bank was out of business." According to him, nearly 95 per cent of MMCB's deposits have been eroded since the Ketan Parekh scam. But he adds that "we can't blame the RBI entirely for this situation." Gurjar is more critical of the RBI. He says it was expecting rich cooperative banks to pump in additional deposits in MMCB, which never happened. "The attempt was foolish for no bank would risk its money on an already-sunk one," he says.

The tainted broker Ketan Parekh owed MMCB Rs 1,800 crore, of which a mere Rs 22 crore has been recovered. The same story was being re-enacted with other creditors. Given this state, no bank was willing to pump additional sums in MMCB. Way back in January, 2003, MMCB's CEO B.K.S. Maruthi had said in a communique that the bank would have to be closed down. But the RBI persisted with its attempts to resuscitate it.

In the last three years, as many as 38 cooperative banks in the state have already closed down, sinking with them a whopping Rs 3,000 crore. Now, another 60 may join that list. Others who had some dealings with MMCB may also be hit. For example, take the case of Mansa Cooperative Bank in North Gujarat, whose deposits total Rs 45 crore, of which Rs 9 crore is stuck in MMCB. If this bank has to maintain the statutory liquidity ratio of 25 per cent and the cash credit ratio of three per cent, which together comes to around Rs 13 crore, it will have little money to keep its head above water. "This really means that Rs 22 crore, or 50 per cent of its deposits, is locked up. And it has to repay depositors from the remaining amount, which is almost impossible," says Gurjar. Patel sums up the situation: "The cooperative bank sector in Gujarat is in doldrums. Now, only a few rich ones will survive, and the remaining will perish."

How A Man Became An NPA