Africa figures more in the Chinese consciousness than ours. Are we losing out? 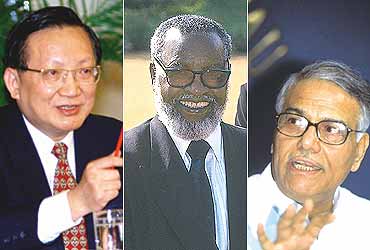 outlookindia.com
-0001-11-30T00:00:00+0553
As the media debates whether or not Prime Minister Atal Behari Vajpayee has granted needless concessions to China, Beijing seems to have decisively wrested initiative from India thousands of miles away, in another continent: Africa. And it is the country's political masters who are to blame, oblivious of the need to frame a coherent, focused Africa policy.

This is best illustrated through an anecdote a senior Indian diplomat narrates. About 18 months ago, India was competing for a UN post. Among the UN electorate was a sub-Saharan African country whose support the government wanted. When the Indian ambassador called upon the African country's foreign minister to canvass support, the latter remarked, "I have not seen you for years. You land up only when you need help." Take another example: when Shashank, secretary (Europe, Africa, America), travelled to the Ivory Coast and Guinea this May, it was the first "high-level" visit to these places in seven years. "There are many other countries in Africa where there have been no visits for years," says a senior diplomat.

The Chinese do Africa differently. This became obvious when Xinhua, the Chinese news agency, pointed to the Chinese foreign minister Tang Xinjuang, on March 6, 2003, "You visited Africa again early this year. It seems to us that you visit Africa every year." In New Delhi, such a question would have been mistaken for an accusation. Tang's reply was candid: "As you all know, it has become a general practice for the Chinese foreign minister to visit Africa on his first overseas trip every year. It has been so for over a decade.... This is a good tradition in the foreign ministry. Since I became the foreign minister five years ago, I've visited Africa nine times, covering almost every corner of the continent, not including those trips where I was accompanying our national leaders."

Compare this to the tour programmes of Indian foreign ministers. The previous foreign minister, Jaswant Singh, discovered Africa too late in his tenure. His signal contribution to this major discovery was a cryptic remark on Africa that still resonates in his inimitable timbre famous both for its depth and pithiness. Inaugurating the Africa Centre at the Indian Council of World Affairs in New Delhi, Jaswant Singh declared, "Africans are our neighbours." This was the same man whom senior officials found "hard to persuade to visit African countries". Young Omar Abdullah, then minister of state, was assigned to these African safaris even as his boss remained obsessed with the United States and other more 'evolved' countries.

In contrast, Jaswant's successor, Yashwant Sinha, has worked up an enormous political appetite for Africa, having already visited Tanzania and Botswana. Soon, he is to visit Mauritius and other nations.

Yet, Yashwant's love for Africa is caught in a bind, courtesy Jaswant. India's traditional policy plank on Africa is to extend lines of credit in exchange for goodwill and influence. Presenting his budget speech on February 28, Jaswant made a submission that cut to the heart of India's Africa policy. "I am happy to announce", he declared, "that the government proposes to generally discontinue the practice of extending loans or credit lines to fellow developing countries. Instead, in future, I propose to utilise the India Development Initiative, which I have already announced, for providing grants or project assistance to developing countries in Africa, South Asia and other parts of the developing world."

This news, say senior diplomats, "came as a bit of a shock" to the Union ministry of external affairs, which was mulling over extending more lines of credit to African nations. "Our policies have virtually come to a standstill," say diplomatic sources.With that budget speech, lines of credit can only be routed through commercial lending agencies like Exim Bank, a policy that has some upsides: importantly, commercial banks are thought to do a better job of soft loan recovery than the Government of India. But the downside is more significant. With the rates of interest being three per cent over the London InterBank Offered Rates (LIBOR), no African country wants to avail this option. Normally, say sources, "it is LIBOR plus one per cent. Even the rbi export credit stipulation is that it should not exceed LIBOR plus .75 per cent."

But the MEA found a way past this problem by offering to "take care of the 2 per cent over the LIBOR rate to nullify the higher interest rate routed through the India Development Initiative". The MEA made this proposal soon after the budget speech. The problem is, say diplomatic sources, the ministry of finance is still sleeping over the proposal.

Meanwhile, Sinha continues to gush over Africa. At the Inter-Session Consultative Committee meeting of the MEA, a parliamentary body, held on May 2, he said, "After having made visits to South Africa and other countries in Africa, I am convinced that Africa is the continent of the 21st century. It is full of enormous possibilities. We should be there as things happen in Africa." He then went on to inform the audience, "You will be happy to know that within the last six months, five heads of states or governments have visited India—the presidents of Tanzania, Mauritius, Namibia, Rwanda and Zambia—recently." Thereafter, the president of Mozambique has also come visiting.

It would seem India's Africa policy was at last taking off. The prime minister used the opportunity of these visits to announce a series of lines of credit: $10 million to Mozambique, $20 million to Zambia and so on. But this is where the story gets cute. Officials now say that "despite the PM's announcements, no action has been taken because the path is unclear". Says Shashank, "In principle, credit lines worth $200 million have been targeted for 2003." The Chinese extend credit double of this.

Ghana has projects worth $45 million in the pipeline. These projects, to be financed by Indian credit, have been delayed. This is where the MEA fears China will score. Says a diplomat, "China is giving aid left, right and centre in Africa where it is buying influence." If this continues, it will knock India a bit. And a series of such knocks could marginalise New Delhi's position in Africa. "The Chinese have already said they will give $50 million line of credit to Ghana." Once the Chinese get a little influence, they usually get a better project later.

They already have a more developed Africa policy. For instance, they have built and provided a conference centre for the upcoming Africa Union Summit in Mozambique. India is sending two naval ships to patrol the country's shores during the summit as a sign of deepening engagement. Yet, when the Ivory Coast was in the process of building a new capital for itself, China was there. Before you could have said Yamoussoukro (the name of the new capital), the Chinese, say diplomats, had offered to construct houses for all of Ivory Coast MPs. This proposal was accepted promptly. Probably, the Ivory Coast will now ask New Delhi for credit facilities. Our spirit may be willing, but will we deliver promptly?

The problem is, diplomats say, "We've realised we can't neglect Africa the way we used to, we can't take them for granted—they are a big chunk of votes at the UN." And India can't ignore them because its neighbourhood policies aren't exactly shining beacons of success. Either way, it's in the dark on a whole continent.