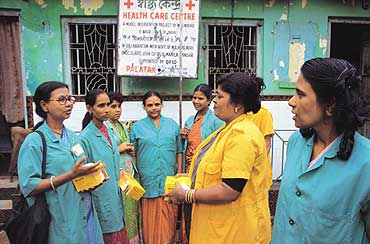 outlookindia.com
-0001-11-30T00:00:00+0553
Condom is a dirty word. Safe sex is objectionable. Morality is in. And all's well with India's devastating HIV epidemic if we don't talk about promiscuity.

Given the latest shift in the Union health ministry's AIDS programme—away from condom-centric campaigns—the groups most vulnerable to this fatal disease will now be denied crucial information about unsafe sex.

It all started with Sushma Swaraj's experiments with truth when she was the Union information and broadcasting minister. Barely 15 days before she took over the Union health ministry, Swaraj ensured that national broadcaster Doordarshan stopped airing the AIDS awareness capsules designed to target rural and small-town viewers.

DD is the National AIDS Control Organisation's (NACO) faithful ally in spreading AIDS awareness. The health ministry pays about Rs 30 crore annually for airing educational ads about major epidemics like AIDS. Yet, in a meeting with DD officials, the NACO and women's groups, Swaraj decided that over 61 million DD viewers won't see or hear about how condoms can protect against AIDS.

That's not all. The second step in her puritanical drive against "condom-centric" campaigns was to direct NACO's state AIDS committees to focus their educational drives away from condoms; advocating their use, it would seem, be tantamount to promoting adultery.

"Over 85 per cent of AIDS transmission in India is through heterosexual contact," says Prof A.B. Dey of the department of medicine at AIIMS, Delhi. "The percentage of transmissions through the sexual route prove we can't be pious about sex. Having multiple sexual partners is a genetic urge. It can't be controlled by singing bhajans."

Dey feels that the only way to tackle the epidemic is by recognising the fact that commercial sex exists as an economic activity and that a huge segment indulges in it. "We're not going to get anywhere by denying this. There are no vaccines for AIDS. The only way to combat it is through awareness," he says.

The health minister, however, is not willing to clarify her position. On contacting her office, Outlook was informed that she cannot be expected to explain statements that have been "twisted and misrepresented" by the media. "The minister is not so unreasonable as to say that we're going to fight AIDS through abstinence," said an official in the minister's office. "The only thing she has said is that our entire focus should not be condom-centric. Can we get rid of AIDS entirely if we start using condoms? What about other modes of transmission like the use of needles, blood transfusion, and so on? How is the condom going to prevent that? Why should the minister clarify her position on this?"

Going by UNAIDS, who, and NACO's own admission, over 85 per cent of HIV transmission in the country is through heterogeneous sexual contact. Considering that half of India's one billion population is in the sexually active age group, the departure from a "condom-centric" approach has made health experts raise doubts about the government's role. The state cannot bring about a behavioural change in civil society, they argue.

It has also confused health workers in the state AIDS committees. "How can we talk about safe sex and not mention condoms? It has been effective not just in India but all over the world," says an official in a southern AIDS committee. States in the south are the worst-affected from the AIDS epidemic, apart from pockets in the northeast and Maharashtra.

The ngos, too, have been left fuming at "such regressive rhetoric". "The minister is becoming progressively regressive. She needs to do a reality check. Is she denying the fact that an overwhelming percentage of AIDS transmission in India is through sexual contact? We watch people die everyday because of the simple reason that they didn't know enough. How can we talk about AIDS awareness without mentioning condoms? Which ivory tower is she living in?" asks Anjali Gopalan, executive director, Naz Foundation.

Dey points out that the success of AIDS awareness in various countries, especially in Thailand, has largely been due to a focus on safe sex practices. UNAIDS reports that the link between prostitution and increased risk of contracting HIV/AIDS is now well established. "Despite the global campaigns, the message is not reaching. It's neither being understood nor is it empowering those who need to act upon it," says a UNAIDS report.

As for the donor agencies, they're equally bemused by Swaraj's move. "I'm sad at the blinkered approach," says Dr Bobby John, India director, Global Fund for AIDS, Malaria and TB. "This will be music to some ears, including the church which will join hands with the Central government, possibly for the first time. I am very apprehensive about the impact it will have on the country."

But Swaraj seems unconcerned. Somebody ought to tell her that neither morality nor symbolism can fight AIDS. Rationality can. And realism.

The Milk Of Human Kindness