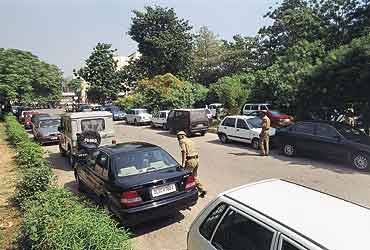 Delhi disgraced itself yet again. A series of gruesome rapes and sexual assaults in the last two months have served as rude reminders of how frighteningly unsafe the city has become for women. But what happened last week in the parking lot of the capital's Siri Fort Auditorium, the venue for the 34th International Film Festival of India, has shaken off any remaining delusions of normalcy.

The victim this time was a 36-year-old Swiss diplomat returning home after a screening of a Chinese film. It was just 10 pm and the parking lot was still fairly busy, with people coming in and out from the auditorium and the adjoining restaurant complex. Undeterred, however, by the fact that they ran the risk of being spotted, the two assailants struck.

As the victim opened her Toyota Qualis, the duo pushed her into the back seat. One of the men raped her, while the other drove through the well-lit streets of South Delhi. Finally, after half-an-hour she was dropped off at Safdarjung Enclave and was casually given instructions on how to get back home.

The man who sexually...