The biggest worry for people of Kachnar, an ‘Ambedkar village’, is the sale of their sugarcane 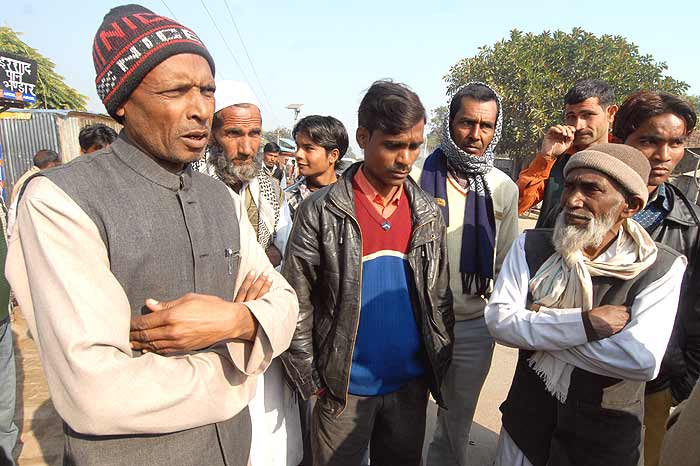 Kachnar is just 4 km from Sitapur, but it is a chosen village for the Ambedkar Grameen Vikas Yojna. Today, it is the turn of Samajwadi Party strongman Radheyshyam Jaiswal—a four-time MLA—to woo the villagers, a mix of Muslims and Dalits. But their attention on this day is diverted by the fact that Mayawati too has come to the district. In this sugarcane belt village, the procurement of the crop is an important issue. In some places, the post-harvest crop is rotting as the state’s procurement policy has failed. The 800-odd households in the village here are all worried about their crop.

Because traditional parties have failed them, some residents talk of giving a chance to the Peace Party. Its candidate, Adesh Singh, a school teacher, is being described as a good man. “Cycle mein kitni hawa bharenge, hathi ke peechey kitne din jayenge (How many times will we fill air in the cycle tyre or walk behind the elephant?),” they ask. The shrinking of political choice is palpable. “How bad can a teacher be? After all, we trust him to teach our kids,” they say.

Kachnar is no different from other villages in the region. Bad roads, erratic water supply, a primary school and a primary healthcare centre which offer only the most basic services. For everything else, the villagers have to trek to the main town.

Besides crop procurement, the cost of fertiliser also has angered the farmers. “Prices have gone up and agriculture inputs have gone up, no one is buying our crop. Life is hard for us, though this is an Ambedkar village,” says Zahid Ali. Most of the residents here say that being an Ambedkar village has changed nothing in their lives. The minorities seemed to be strongly anti-Mayawati, the Dalits were divided on the issue. If a state-level programme like the Ambedkar village scheme has flopped here, the upa’s NREGA too has hardly worked. That’s some consolation for the BSP.