Computers balance the comforting isolation of these Tamil schools 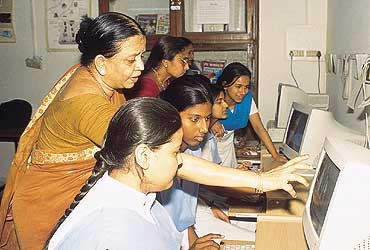 outlookindia.com
-0001-11-30T00:00:00+0553
Computer classes are something of an event at the Delhi Tamil Education Association’s Lodhi Road school. For most students here, the weekly classes are the surest way to "computerisation". Already a rage in schools better-heeled and therefore better-equipped to make monetary demands on parents, computer education has only recently become a priority here. For the DTEA students, the two-year-old classes are still small windows opening into an ever-expanding wired world.

Being government-aided schools, DTEA’s seven campuses across Delhi aren’t exactly bursting with funds—the kind extracted from parents by private schools under concocted pretexts like "school building funds", "school development funds" and the like. Computer classes here fulfil a more basic need, engineering social change and bringing economically disadvantaged children at par with the rest. Academically, the DTEA schools have always been among the few government-aided institutions in Delhi to produce excellent board results year after year.

The training and hardware, provided by Schoolnet India under its K-10 (or Kindergarten to Class X) programme, are "upliftment aids" that have been good for the teachers too. Their new computer-enabled status has helped them overcome a fear of technology also. "Earlier, many of us didn’t even know how to boot a computer," says Geeta Ambarishan, math teacher now called to the challenge of enlightening students on the intricacies of Paintbrush and Word. For her and the other staff, it’s also been about becoming better organisers. Time-consuming activities like compiling subject results and setting test papers are now made easy with computers.

But what has made the new learning a success at DTEA is the schools’ uniquely conducive atmosphere. "It’s just like in Tamil Nadu...we have the approval of all the parents, of over 9,000 students," says a proud S. Natarajan, honorary secretary of DTEA. It is also an atmosphere that has the blessings of Delhi’s 16 lakh or so Tamilians. Prevalent among the community is a story that makes these schools seem like islands of a Tamil or "Madrasi" identity. The tale goes, if you’re Tamilian, lost and friendless in Delhi, all you have to do is to find a DTEA school and everything else will be taken care of. All, as Natarajan would say, in a very "Tamil Nadu atmosphere".

The ambience isn’t the only draw for Tamilians in the DTEA family. The clubby pta-type cooperative, where each parent has a say in the running of the school, is also an attraction. On admission of their ward(s), parents become ex-officio members of the DTEA. And no matter how many children are enrolled, all they have to pay is an annual membership fee of Rs 600. The association’s governing body is also elected by this cooperative of parents. Natarajan, who runs a business making safety instruments for the petroleum industry, feels the arrangement is ideal for people like him. "Had I put my children in a public school, they would have become too hi-fi. This is the best place for us because we are middle class and that’s how we should remain," he says. DTEA president and Supreme Court lawyer S. Srinivasan, whose two boys passed out from DTEA Laxmibai Nagar, prefers these schools because here there’s no "violence and drugs like some of the other schools" in the city.

Apart from being a place where the students don’t face ethnic discrimination, these "linguistic minority" schools also give their alumni a taste of the life their parents have left behind. In a way, they help strengthen the tenuous link their families have with Tamil Nadu; its language, literature and culture. It’s also a place where "Madrasis" can, in the words of an uncharacteristically smug association pamphlet, hone their "richness of intellect and community life".

The stress on community life here also has a larger significance. DTEA aims to preserve its tenets through a unique cooperative experience, with affordable education and a stress on well-rounded excellence. And perhaps the assurance that a South Indian identity would remain unfazed by the corrupting influence of a cosmopolitan culture. To find out more about these unique schools, write to The DTEA, S.S. School, Lodhi Estate, New Delhi 110003.