The ceremony is over, now to the task of governance. So far, the rewards have been for loyalty, not merit. Will it be enough to pull India? 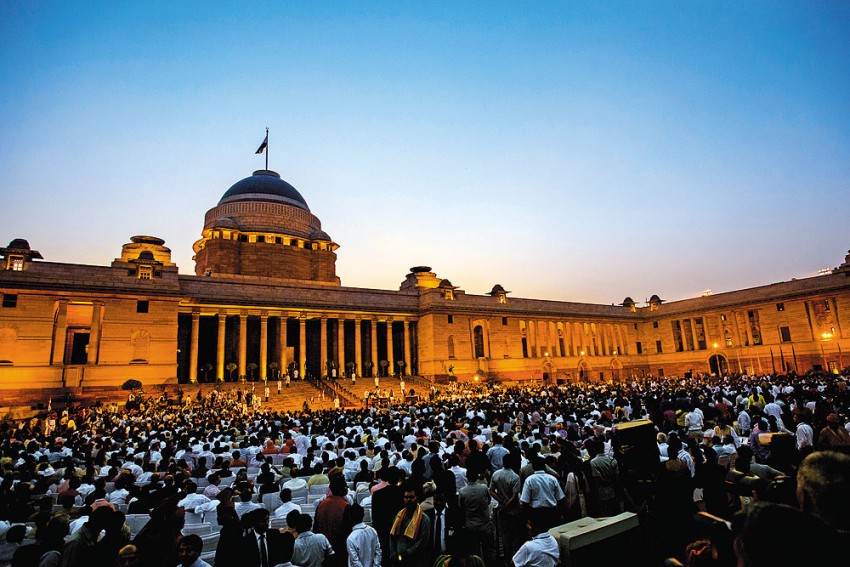 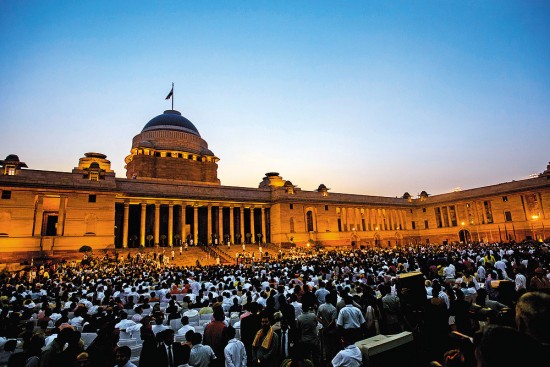 Challenges Before The Modi Sarkar

The sun set on the old regime at 6 pm on May 26 at Rashtrapati Bhavan as Narendra Modi became India’s 15th prime minister. There was dehydration due to the acute heat, enthusiasm in the largest gathering ever for a prime ministerial swearing-in, curiosity to get a glimpse of the SAARC leaders who attended, and a minor hustle when the top guns of industry beat the BJP footsoldiers and Modi strategy loyalists to the best seats in the house. For them, the moment would have been quite sublime, truly ushering in a new Indian order. Yet, there were some ridiculous tou­ches too—a commentary about the wonders of the building played out as if it were a gathering of tourists, even as people jostled for seats, searched for water and warmly greeted those who they had fought fierce battles against.

That setting sun moment has now passed and new power equations are firming up in Delhi. First, let us be clear that it is Narendra Modi who has shown the nation that it is he who is in control of the script. He has since the swearing-in held many cabinet meetings and, among other engagements, paid tribute to the statue of V.D. Savarkar, spoken to Chinese premier Li Keqiang on the telephone (besides the numerous SAARC heads of state he hosted). A Press Information Bureau release also stated that he “took a round of the PMO”. The man is not lacking in energy and purpose, and like the new PM or not, the country has a decisive leader.

Having said that, let us also be clear about the nature of the party he heads. It is a loquacious party, from an ideological tradition. If the past is an indicator of the future, then expect the new crew (some of whom are repeats from the Vajpayee establishment) to every now and then make unrestrained statements. It is in their DNA. Some are raw, brash and ambitious and will be in a hurry to prove themselves in their individual ministries. On infrastructure development, particularly roads, BJP regimes both at the Centre and the states have a much better performance record than the Congress. And they are raring to go. 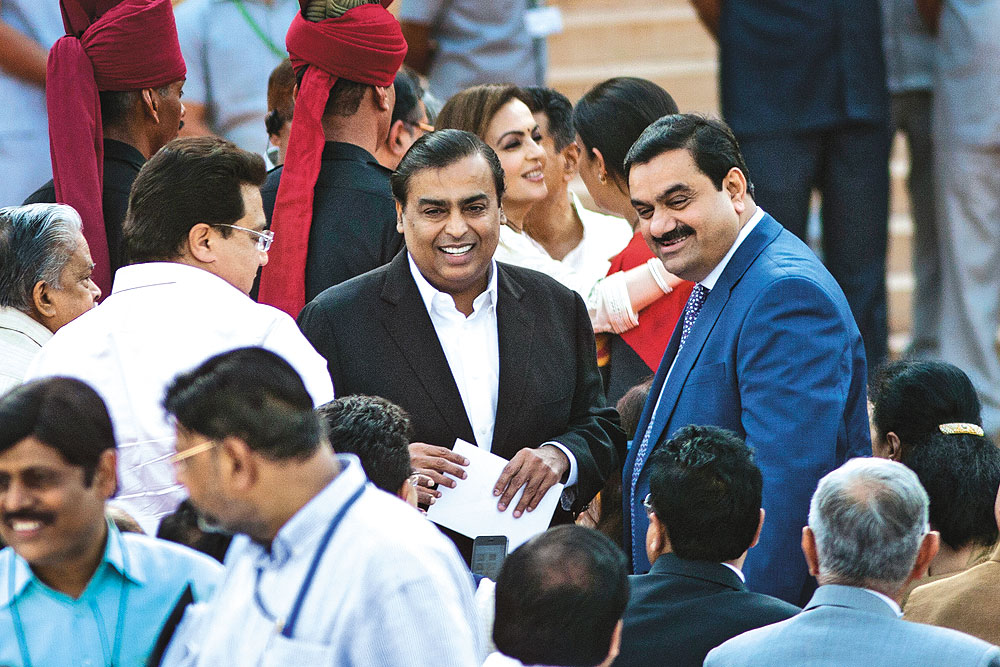 Corporate Presence: Mukesh Ambani and Gautam Adani at the swearing-in

Let us also emphasise that the entire class character of the new council of ministers is very different from those at the helm of affairs during the 10 years of UPA rule. There are no children of privilege here and many are more comfortable in their regional language than in English. Modi has deliberately not given ministerial berths to the offspring of BJP leaders. Having been given a straightforward five years at the helm, unencumbered by coalition pressures, the BJP and Modi enthusiasts will certainly set out to create a counter-establishment in Delhi.

At the heart of it all will be Arun Jaitley, minister for finance, corporate affairs and defence. What is often not stressed when Jaitley is described as a “suave lawyer” is the fact that, unlike the many legal stalwarts of the UPA establishment, he was not an inheritor of a flourishing practice and built one up himself, working his way up from the lower courts. At the age of 37, he was appointed the additional solicitor-general of India by the V.P. Singh regime, during which tenure he played a role in putting together the papers leading to the Bofors investigation. President of the Delhi University students’ union, he spent 19 months in jail during the Emergency. He is, therefore, a self-made man, for years now one of the more influential individuals in Delhi with cross-party contacts, friends in media and big business.

The BJP is a loquacious party. Expect the new crew to make unrestrained comments now and then. It is in their DNA.

As a minister in the Vajpayee regime, one of Jaitley’s most outstanding performances was at the WTO talks in Cancun, where he spoke for the bloc of developing nations and withstood the sustained pressure from western countries. Subsequently, in his role as the leader of the Opposition in the Rajya Sabha, UPA ministers, although at the receiving end, would often remark about him taking the debate to a new level. One of the big challenges for Jaitley now would be to maintain the balance between corporate and public interest in an overwhelmingly poor country. His economic impulses would be right-wing, yet he has been in public life long enough to know that a ruthless pro-corporate agenda can be counter-productive in the long run. In one sense, the economic policies of the Modi regime would be precisely where the meat of the story would lie. Do you clear the people off forests and mineral-rich lands in the name of growth? Will there be amendments to the land acquisition law that BJP leaders had seen as “impractical and hostile to any investment”? And, most significantly, how do you work the complex levers of the economy to bring down prices?

Jaitley certainly has his job cut out for him. It is possible that Modi has rewarded him both for application to the task (he was also critical in evolving legal strategies to deal with the riot and encounter cases of Gujarat) and his proven loyalty. On the face of it, individuals who Jaitley supported (such as Harsh Vardhan in Delhi against the faction led by Vijay Goel) have all found their place in the sun. There are many leaders whom he encouraged over the years who are in. Most significant is the manner in which most economic ministries have landed with individuals who would have great comfort working with Jaitley. MoS Dharmendra Pradhan gets independent charge of petroleum and natural gas, MoS Piyush Goyal gets independent charge of power, coal and new and renewable energy, while Nirmala Sitharaman gets independent charge of commerce and industry (she will also be under Jaitley in finance and corporate affairs). As for the affable I&B minister Prakash Javadekar, who also gets environment, forests and climate change, he too is very comfortable with the new finance minister. 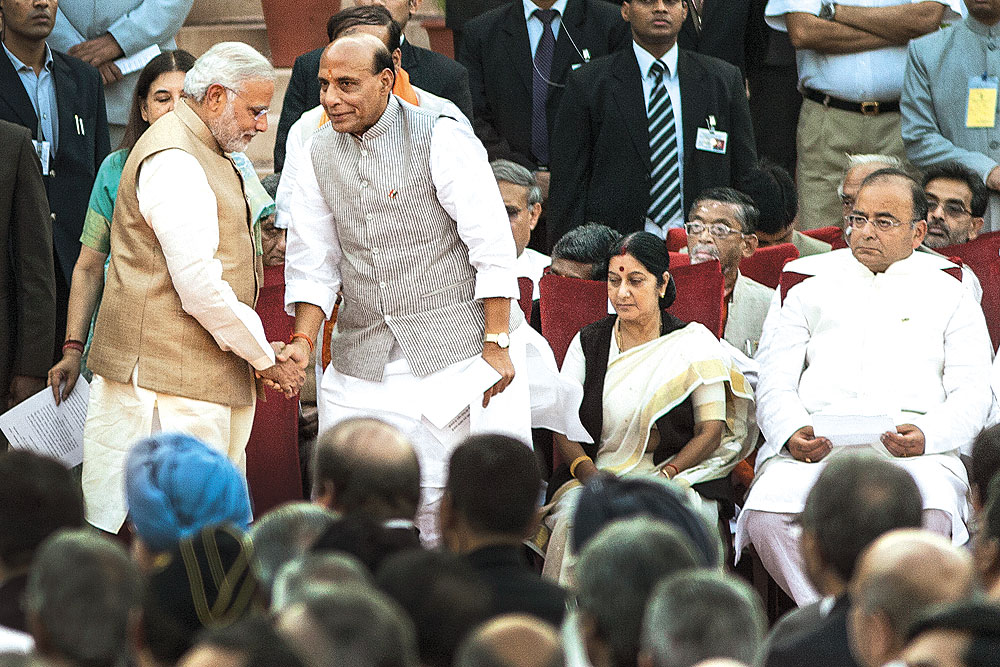 Equally, it cannot be ignored that those who were close to other factions in the BJP have not found a place in the new Modi dispensation. L.K. Advani has been quietly retired, as have other leaders older than 75. Sushma Swaraj gets the significant external affairs portfolio, but without commerce attached to it, as had been expected. Sources say that she was sounded out for the HRD ministry but indicated she needed to be in a portfolio that ensures membership of the cabinet committee for security. She’s got that, but some argue that HRD is possibly a meatier ministry in terms of its impact on education. That’s gone to Smriti Irani, who has been built up as the new-age woman leader of the BJP. Now that the 38-year-old cabinet minister is caught in a controversy over her educational qualifications, there are some who suggest she would be changed. But sources close to Modi say that the greater the attack, the more he will dig in his heels in support of Irani.

Sources say Venkaiah Naidu was considered for defence but then it was thought he could shoot his mouth off.

There are many disgruntled off-the-record murmurs from both the BJP and RSS hopefuls who have not got in. And there are some cleavages that have certainly not healed. For instance, sources say that influential lobbies are arguing that Arun Shourie (who failed to get finance) should get the defence portfolio. It’s no secret that Shourie has on different occasions fallen foul of both Rajnath Singh (whom he publicly described as Humpty Dumpty and Alice in Blunderland) and Jaitley, agai­nst whom he had orchestrated letters—and that’s a tough past. Sources also reveal that Venkaiah Naidu was considered for the defence portfolio but it was later decided that he can shoot his mouth off in ways that may not be becoming for the country’s defence minister. He is, however, considered a good pick as parliamentary affairs minister as he is jocular, popular and likeable and has the ability to get along with politicians outside the now charmed ideological circle of the BJP.

Clearly, there is an inherent problem with the quality of some MPs who would be non-entities were it not for the simple fact of a vacuum in politics being filled by what evolved into a mandate for Modi, particularly in Uttar Pradesh and Bihar. Many of those who won, therefore, are not the sort of people whose ability or talent has been proven. They were just lucky. They thus cannot be touted as the “fresh blood” in a council of ministers. There is still a search for talent that is ongoing in the Modi regime. 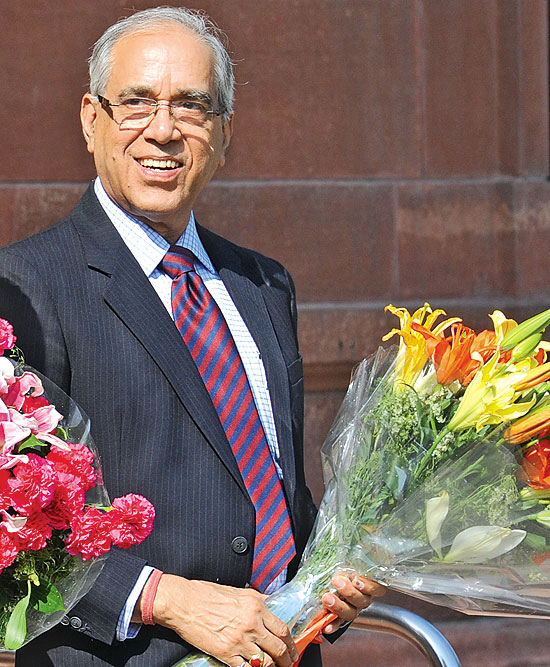 Consider the manner in which Modi chose Nripendra Mishra as his principal secretary. He was given a list of six to seven retired bureaucrats that was vetted by people in the BJP who are close to him. Intelligence reports on these officers were scrutinised. Then Modi personally conducted interviews and asked questions and made his own assessment. He chose Mishra, and once he had made up his mind, he was willing to let go off the niceties of convention and legality and issue an ordinance to appoint the former chairman of trai (Telecom Regulatory Authority of India) as his principal secretary. That is an indicator of how the new PM will conduct his affairs. For all the focus on the politicians, the bureaucrats will be key to the way he operates.

Without doubt, Narendra Modi is in control of a situation of his making. He is travelling along new vistas and changing the terms of engagement. It’s certainly the sunrise moment for Modi and his ideas of nationhood.