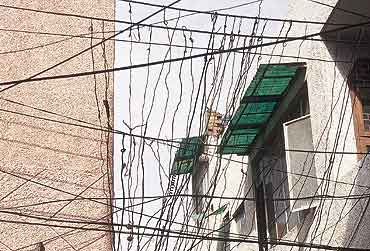 outlookindia.com
-0001-11-30T00:00:00+0553
Come July and the beleaguered Delhi Vidyut Board (DVB) shall cease to exist. It will be unbundled into one holding and five operational companies. The operational companies will comprise a generation company (genco), a transmission company (transco) and three distributing companies (discoms). The three discoms—the key to improving consumer services—have been privatised. The Tata Power Company and the Bombay Suburban Electricity Supply (BSES) have bought a controlling 51 per cent stake in the discoms. The government will hold the remaining stake.

Tata Power paid Rs 187 crore to get management control of the distribution in north and north-west Delhi, while BSES has got control of the distribution of south and west Delhi for Rs 235 crore, and central and east Delhi for Rs 59 crore. In return, the two companies will earn a return of 16 per cent on their equity, but only if they are able to reduce losses by 17 per cent within five years. If they surpass the target, they will keep 50 per cent of the additional revenues.

The new private owners will also not retrench any of the DVB employees, who will be working for the discoms. The latter will continue with the same terms and conditions as they enjoy now. The liability of retirement benefits of the employees will also be taken by the new firms.

DVB's privatisation (its earlier avatar was the Delhi Electricity Supply Undertaking) has been a long time coming, since it's one of the worst-performing electricity boards in the country. The aggregate technical and commercial (AT&C) losses—the difference between the energy supplied and that for which payment has been recovered—which DVB incurs supplying to its 2.4 million customers is a staggering 50.7 per cent. Its staff strength is a bloated 25,000 and accumulated losses run to Rs 22,000 crore, of which over Rs 17,000 crore has been designated as "unserviceable liability" and will be parked in the holding company. To find a way out of this mess, bids were invited in 2001 from the private sector. Six bidders qualified for the last stage or the Request For Proposal (RFP) stage, but finally only two bids were received, from Tata Power and BSES.

As soon as the agreement was inked on May 31, the usual rumblings of under-selling state assets started. Critics pointed out that the three distribution companies' assets were together valued at about Rs 2,360 crore, but what the government got was about a fifth of that: Rs 481 crore. Says Jagdish Sagar, chairman, DVB: "No better deal was available. The current DVB staff have shown that they are for privatisation by not going on strike...and under tight management their behaviour will improve."

The ghost of the failed Orissa power distribution privatisation exercise also hung over the DVB negotiations. In '95, the Orissa State Electricity Board (OSEB) was restructured with corporatisation of generation, transmission and distribution. But today, finances are in a shambles with the distribution firms owing the transmission company, Gridco, about Rs 1,600 crore. The latter, in turn, owes power supplier NTPC about Rs 1,000 crore. The problems were the same as in Delhi: over 50 per cent T&D losses. While the state government blames the private distribution companies for this, they in turn allege that policing the transmission networks and apprehending and punishing the guilty is the government's responsibility.

Another major reason for the mess is the steep overvaluation of the assets which the government sold to the private sector. According to the Kanungo Committee report on Orissa power, the actual value of Gridco's assets is half the Rs 2,000 crore touted earlier. If this value is brought down to a realistic level, the bulk tariff charged by Gridco and payable by the distribution companies would be reduced substantially, as the bulk tariff is partly calculated on the cost of assets.It is reliably estimated that due to overvaluation of its assets, the Orissa government gained Rs 5,500 crore from the reforms!

So the challenge that Tata Power and BSES face in Delhi is massive. There is the large-scale meter tampering to tackle, illegal tapping of power in both authorised and unauthorised colonies, power theft in all its possible forms, not to mention the poor billing, collection systems, and the thin work ethic. "Malpractices have flourished in the absence of an effective legal framework and its proper implementation," says Adi Engineer, managing director, Tata Power. "There are no overnight solutions to a problem that has practically paralysed Delhi for decades now. It is going to be a huge task to rectify the power deficit problem, however we are hopeful that with the support from the state government and regulatory bodies, we will accomplish our objective of providing better power supply to our customers. With the cooperation of all, including consumers and employees, Delhi should be replicating the Mumbai model in five years time."

A.K. Sardana, BSES vice-president, says that a multi-pronged approach would be required to rein in the losses. "We'll follow a profit centre approach, dividing and subdividing the distribution area into various profit and cost centres on the basis of sub-stations, feeders and so on, and allocate responsibility and accountability to various employees," he says. "We'll also suitably incentivise and disincentivise the employees to plug thefts." But the figures are daunting. In South-West Delhi, Sardana estimates theft to be to the tune of 30-35 per cent, in Central-East it's higher at 35-40 per cent.

But Sagar is optimistic. "Any commercial operation is always better handled by the private sector," says he candidly. "Places where distribution is privatised like Calcutta, Mumbai, Surat, Ahmedabad, they lose far less than the state electricity boards. Delhiites can look forward to a better summer next year. No immediate miracles will happen, but better service can be expected."

The private players will, however, need strong government backing to carry out their plans. The first step: suitable legislation. "The anti-theft legislation adopted by the Andhra Pradesh government, for example, has already identified the issue," says Engineer. "Some other states have set a precedent in this regard by drafting legislation to punish power pilferage. The message should go out that no one is above the law and an effective anti-theft legislation must be there to support any action taken." Orissa is also now planning stringent laws.

Meanwhile, cynics express doubts on how strongly politicians will support the discoms. Free electricity is a time-tested poll promise all over the country. Though there is no class of consumers in Delhi who legally get free power, there is a vast number of unmetered and illegal power connections. In state after Indian state, power reforms have stumbled and choked on a lack of political will to charge vote banks for their kilowatt-hours. In Delhi's neighbouring state Haryana, CM Om Prakash Chautala is in trouble because of his refusal to waive Rs 650 crore of farmers' electricity dues piled up since '92.

The private players flip the argument around. They argue that power vote-bank politics actually denies consumers of the service that is their rightful due. "The entire exercise of privatisation has been driven by a single-minded concern of ensuring that consumers have reliable and good quality supply at an affordable cost," says Sardana. "However, consumers, on their part, also have to reciprocate BSES' efforts by being prompt in paying for the electricity consumed. Here, consumer education will play a major part as the message would have to be spread that it is in the consumers' interest to ensure sound financial health of the distribution companies.Only financially strong distribution companies would be able to provide affordable and good quality power on a continuous basis to the people of Delhi." The next few months will prove whether the capital's politicos agree with this irrefutable logic.